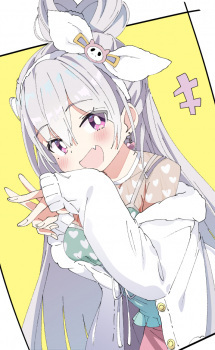 My-homestar77 Apr 15, 7:07 AM
Heyy I'm so sorry, I genuinely thought u didn't reply, I must've not noticed it in the notifications :(
First things first, how ya doing, a lot must have changed with in the span of almost two months.
Winter season ended and it was epic apart from the one hell of a dissapointing adaptation of promised Neverland s2 we got lol.


Yes I've been told to watch all iron man movies. I feel like I'm one of the small percentage of people tht don't get the whole hype around Tony Stark as a character since I've never properly seen any of the iron man movies. I always thought of him as a rich and handsome looking billionaire lol.


Lmao I honestly thts basically most kids who watched it, I was way too obsessed with Hermione at the time to have any time to think about becoming a wizard.
Yeah it definitely is an epic movie series I'll definitely be down to binge all the movies after I'm free. Huff

I've actually seen it. It's Joey right? According to the video our country do be having real good taste lol.
And also suprised cuz hajime no ippo was there. Literally met no one whose actually watched it.

Death note op 2 was just too iconic. I remember like 4 or 5 years ago laughing my ass off after listening it on YouTube as I followed the misheard lyrics comments. Good times. I miss death note.
True I even watched domestic kanojo cuz of its banger of an opening.


Yeah you were right on Soul definitely ain't a family movie, my sister was bored sick while watching it, she didn't catch on to the themes at all, which kinda took away my enjoyment as well. But afterwards I watched it alone and can say it's definitely one the best!


Phineas and Ferb is goated, I binged watch all of its episodes actually 2 years ago. Its still as enjoyable as it was when I was a kid. I feel disappointmented in myself for not knowing there was another movie.
As for croods I don't even remember half the things tht happen in it. But I remember it being a good movie lol.


So how'd you like jjk? The stong factor definitely was the animation. MAPPA really went in on it.

JkayW Apr 4, 7:23 PM
i just wanted to say your favourites list is based

no need to respond

lmao when I flew to the US, I drove to germany and flew from there :D

My-homestar77 Feb 25, 8:08 AM
Oh damn, I always thought it was more like a silly turned down horror movie, I guess I'll have to watch it one of these days. Honestly one of the only horror movies that scared the shit out of me was the 1st chucky movie, it's to the point 10 year old me basically stopped playing with all my toys and figurines cuz of the fact one of them may actually be alive.
Did you watch all 22 movies? I have yet to watch iron man movies and ant man movies which are supposedly important according to my friend to watch the endgame. And he couldn't believe I watched infinity war without watching them. Wanda vision does look pretty interesting, specially elizebeth Olsen 😶
Damn child robiiii was keen on becoming a wizard huh? Lol


Lmao It would be pretty interesting if mal had a feature by how you can filter the top rated list of animes by countries.
Hmm weird, They could've at least animated the last arc after coming this far. I guess thts the only explanation lol. but man Xebec is such an op studio, you know an Ecchi anime is gonna be more enjoyable when they animate it.

Yeah definitely agree, people be capping hard when they say they watch the opening every single ep. But I guess there could be some exceptions cuz I have actually done it with Tokyo Ghoul season 1 op, it was soo good to the point I watched the whole series as an excuse to listen to the op lol. Also it happened with domestic kanojo. I guess it's the result of the opening being better than the actual show.

Let's see how good the soul movie is, you've made me even more curious, all I've been hearing is good things about it so my expectations are very high.

Damn Moana was 5 years ago? I was 13 when I watched it (￣ヘ￣）
But the most important question is where tf is the next Disney Princess, I'm waiting for a thicc princess to appear
Edit: just saw the trailer for "Raya and the last dragon" Which apparently is the new Disney princesses. Huff
Yes, they all look pretty interesting, and now tht I'm looking back at 2020 animated movies list there's actually a lot of things I missed. Like I've no idea tht croods got a sequel. also Phineas and Ferb got a movie?? The hell I'm like the biggest fan of the show. I've got a lot to download.

20 years ago??? Damn your an old man Robiiii
Honestly everything I remember about Pocahontas is just depressing it's not even what happens In it but just the whole vibe, so the kid me wouldn't recommend it.

Ratatouille was awesome, need to rewatch it too.
Bruv I just realized I haven't watched toy story 3 WTF (O_o)?? I'm going through an existential crisis right now. This is not good. We'll put toy story 3 on the front of the download que. First I guess I'll have to go through the 2019 movie list then, I bet I'll find lots to watch lol.

I see your catching up with jjk, so how is it? Ain't the animation fucking beautiful. Specially in the opening.

EcchiGodMamster Feb 23, 7:36 AM
it was like making a thread kinda... but they were blogs on your profile

if i had a pp that said sample, thats all ppl would respond with

i'd mad a blog and thats all ppl would write XD

Fabio_Bandicoot Feb 22, 7:39 AM
Yeah, I absolutely love Vinland Saga, both the manga and anime
When I finished the anime I was stunned by the plot and characters, and reading the manga was awesome, everything improves in a glorious satisfying way

I definitely recommend the manga, if you ever feel like reading it ;)

Fabio_Bandicoot Feb 21, 4:13 PM
I see you're watching Vinland Saga
Are you enjoying it?

My-homestar77 Feb 13, 6:48 AM
So was IT scary (Big brain pun) . I ain't  a marvel fan but all the hype led me to watch some movies of the Avengers  universe so I fan check out infinity war. Enjoyed all 3 thor movies. I still haven't watched Endgame lol. The only Movie series I truly enjoyed to the bone was Harry Potter, there was a time when it was the only form of entertainment I knew, just kept rewatching it every weekend XD.

I feel like harem animes are more entertaining compared to normal romance animes, can't really give any valid reasons to why but it just is. And No I don't like to self insert myself into the Mc's position lol. Right now watching To love ru.

Yeah, but I wouldn't mind switching from time to time, can be FUN.

Was talking about Dumbell. But tonikawa opening is fire as well, specially tht rapsy bit. Yep It was pretty unique.

Yes I do actually have Soul movie downloaded, just need to find the right time to watch it, Planning on watching it with my sister,I tend to enjoy Disney movies with a bigger group while I hate watching anime with others.
I bet it was amazing. I can't believe Peter Pan is from the 50's, I love Peter Pan and tinker bell is thick asf. Can't say same for the sequel. It was a little meh imo. the girl in the sequel is a total bitch, Wendy is best girl. Come to think of it, it was Wendy's daughter in the sequel huh. Yeah Moana was very different compared to the normal princess movie. They also nailed the songs. My favorite song was shiny by Mr. Shiny crab.
Hmm I've seen almost all Disney Princess movies. Cindrella, snowhite and tangled are the ones that I remember the most I guess. There are others like Pocahontas and Mulan which I remember quite vividly. Can't decide which one is the best tho. As for Pixar loved incredibles got a meh sequel, loved monters Inc got a okay sequel. WALL-E  is Goated.
All Comments