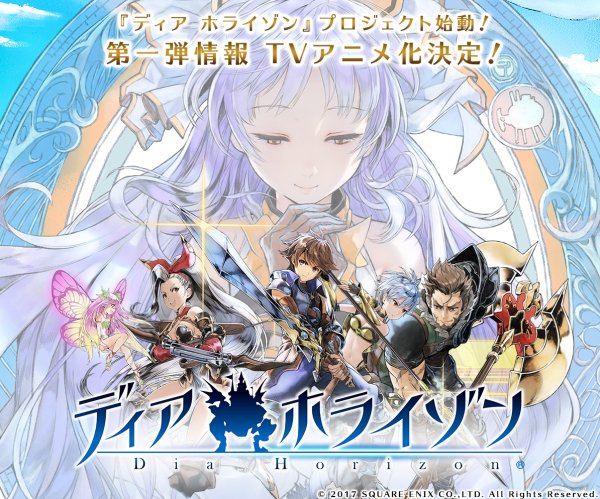 A multimedia project by Square Enix titled Dia Horizon has launched. For the project's first news, a TV anime has been announced to aired in Fall 2017.

Introduction
We met and share one death - What's beyond the end of the horizon? Death… hope… freedom… … A girl has born with the secret to the end. She... is not allowed to live freely. "Freedom" is just a word she yearns for. She has lived in a closed and narrow world whole her life, and is chosen by "someone." Therefore, she thought, if the God only gives her scenario of life with no freedom, I want to share the "death" with you, not that "someone." I want to give half of my destiny to her, even if I have to share the "death" with her.

marconii2002 said:
And hype is dead Anime it will be CG and Flash animated 5 minutes shorts https://www.animenewsnetwork.cc/news/2017-09-26/square-enix-dia-horizon-tv-anime-revealed-as-cg-shorts-debuting-october-2/.121868 even new visuals looks like shit
I already posted a separate news post about it...

And hype is dead Anime it will be CG and Flash animated 5 minutes shorts https://www.animenewsnetwork.cc/news/2017-09-26/square-enix-dia-horizon-tv-anime-revealed-as-cg-shorts-debuting-october-2/.121868 even new visuals looks like shit

It seems like there's also web ver., which started today.

when everyone compare an anime adaptation of a game to an original project...
are people really that bored of fantasy setting? or are you guys just already too old for anime?

Paulo27 said:
Literally no attempt to distinguish it from Granblue Fantasy.
Its pretty much indistinguishable, but since grandblue flopped so hard in terms of quality maybe this could be a 2nd chance at this premise and setting.

The art looks incredible. Will give it a try.

Well its original work so i'll give it a chance.

Another mediocre fantasy anime it seems.

Nice premise and art. Now it's matter of making proper execution and then... bang!

Expecting 1-cour so hopefully it will be a solid show.

after reading the synopsis and watch the PV, this remind me of Granblue Fantasy hmm.

Yeah, I got some Granblue Fantasy vibes from this as first too just from looking at the visuals alone.

Can't exactly blame anyone who thinks this is kind of like Granblue Fantasy to be honest. But I'm open up for Fantasy anime, since it's one of my favorite genres. Hopefully it can be good though.

Oh, a new unknow fantasy videogame gets his prologue as a TV show? Interesting (as long as the show has a story of its own outside of the greater scenario).

Always up for more fantasy ^^