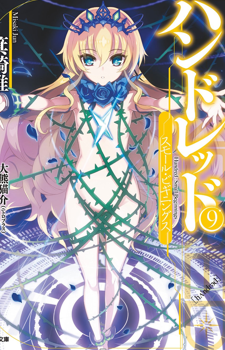 The 9th volume of light novel Hundred revealed that the upcoming TV series will premiere in Spring 2016. In addition, both the cast and staff have been revealed. The cast of the drama CD will reprise their roles for the anime adaptation.

Hundred is a light novel series written by Jun Misaki and illustrated by Nekosuke Ookuma. The series began publishing in December 2012 and currently has nine volumes in print.


Update December 15
The official site revealed the first PV of the anime as well as additional staff and cast members.

I seen this one last season.;)

Another generic romance,ecchi,harem & action anime? bring it on.

It's funny how it's more than 95% identical to IS.

I'm ok with it though, because it's not like its pretending to be something it's not. Like you think they put that boob grab at the end of the PV because they thought it was an epic battle scene? No. Obviously with that scene followed by the epic closing sound they were trying to make it funny.

Though this does look like its getting a decent budget, so that'll be nice.

Also I'm pretty sure it's international law that anything with Yui Horie in it is a must watch.


K-Anime said:
I wonder about another upcoming anime Masou Gakuen HxH whether or not if it will air in the same season. Might be a repeat of Gakusen Toshi Asterisk and Rakudai Kishi no Cavalry. Similar shows airing at the same time.

I don't expect this and Masou Gakuen to be even remotely similar. Considering how fucking crazy lewd MGHxH is.

Equitum said:
You know, that trailer was actually alright ... until that inadvertent boob grab at the end. Godammit ... smh
It wouldn't be a good ol' harem-school-battle without a boob grab.

You know, that trailer was actually alright ... until that inadvertent boob grab at the end. Godammit ... smh

Tbh, the animation looks pretty good in that trailer.
I'll probably watch it just because, although I heard the story isn't anything amazing.

tsubasalover said:
News Update
The official site revealed the first PV of the anime as well as additional staff and casts.

At least the MC's and Main Heroine's (who I assume to be the white haired girl) character designs look nice.

News Update
The official site revealed the first PV of the anime as well as additional staff and cast members.

NanaIroNeko said:
watch the manga and looking forward to the anime

Nanaca said:
Hey, what's a season without a LN about totally-not-kirito and his totally-not-harem in a battle-school-something adapted.
if sao was the first example you could have thought of u must be new to anime

Hey, what's a season without a LN about totally-not-kirito and his totally-not-harem in a battle-school-something adapted.

YAY ANOTHER ECCHI MAGIC SCHOOL BATTLE HAREM ACTION COMEDY WHERE THE ENTIRE CAST IS OP, EXCEPT THE MC IS WAY MORE OP THAN HIS WOMEN LOLIS BUT HE'S A NICE GUY SO HE GETS THE TSUNDERE, THE BIG-BOOBED NICE GIRL, THE KUUDERE, AND HIS IMOUTO ALL WANTING THE D


Watching because I'm a masochist and want to fill my list

watch the manga and looking forward to the anime

Looks like another Infinite Stratos....Does anyone know if it's at least better?

Oh well, I'll just hope the artwork and the animation would be good at least

Damn it. Production IMS again?
This could be ugly as fuck again.
I wish AIC Studio gets back soon. (Please be Next Year!)