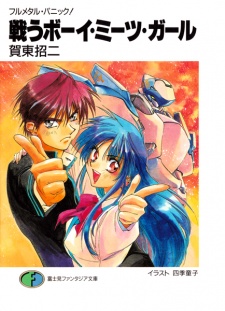 It was announced via Niconico at the Fantasia Bunko Big Thanksgiving 2015 event that Full Metal Panic! will be receiving a new anime adaptation. The announcement was made by the creator of the series. It is currently unknown if the series will be a continuation or which studio will be animating the project.

Full Metal Panic! is a light novel series written by Shoji Gatoh and illustrated by Douji Shiki. It had 12 volumes published by Fujimi Shobo between 1998 and 2011. Previously, the series was adapted into two TV series, a side story, and two special episodes.

Synopsis
Jindai High School was a relatively safe place, right up until Sousuke Sagara transferred there. A total nut, he wreaks havoc on the school's student body and gets into a world of trouble with the teachers! But there's more to Sousuke than meets the eye—not just a hell-raising student, he's actually a member of an elite military unit, on an undercover mission to protect the beautiful schoolgirl Kaname Chidori from the KGB. (Source: Tokyopop)

My body is ready...synthetic fabric eating bacteria level of ready.


Apparently people can't read.[/quote]Is it so hard to explain?

I can wait, average human lifespan is increasing i hear

So, is this just about studio, or now new season period.

JizzyHitler said:
could be clickbait but hey ill post it regardless
http://yaraon-blog.com/archives/73433

Apparently the studio will be bones if this isnt BS.

Yaron is where most news come from and seeing how bones had leaks for every project it seems likely.

could be clickbait but hey ill post it regardless
http://yaraon-blog.com/archives/73433

Apparently the studio will be bones if this isnt BS.

Well the next part of the story (after The Second Raid) is probably one of the best arcs in all of FMP. Dancing Very Merry Christmas.

For those who want more Fumoffu-style comedy, I think you might be disappointed, while there are still fun parts, big emotional parts and some truly awesome action scenes (I remember reading the light novel and being gripped by it) the story really takes off and doesn't slow down after this arc.

I heard reports that this new anime is going to cover the remaining light novels and completely finish the story. I am crossing everything that is possible to cross that this report turns out to be true. I agree the first series can give you thematic whiplash at times but the second raid was far more consistent and integrated the comedy far better. I don't think it really needs a Brotherhood-style remake, they didn't cut or change enough to warrant that. But still, hopefully going forward, FMP will be more like TSR than the original series.

Fact is, shizz is about to go down in this series so the comedy won't really fit in well after DVMC as things go crazy intense. I think this has the potential to be one of the most engaging, gripping series going if they get it right and don't cut or rush the story.

They will have to catch new fans up though.... That's the only worry I have when it comes to the possibility of a remake. They might feel the story is too involved to just continue on from where a decade old series left off. If they don't remake it though I wonder if they will rebroadcast the original series or just push the blu rays?

I think I'm stoked about this mostly out of nostalgia. Hope it's a continuance of the series. Wonder if Tessa's brother will be the primary antagonist of this new series?

Sooul-Master said:
I would have preferred a complete reboot, as I have forgotten most of it by now.
Oh well, might re-watch the whole series.

Am I dreaming!? Awesome news OMG!!

Just announce S3 of Spice & Wolf and I shall believe in anime again.

This all depends on the studio adapting and where they are gonna start, though. If it's a full remake, the start of the story Gonzo covered is not great, and it's gonna be hard topping what Kyoto did with Fumoffu/TSR, as well as pointless. I probably won't watch if I have to retread so much old ground.

If they start post-TSR, tho? I read ahead in the manga, and it gets REALLY dark. Good shit.


phsg94 said:
If it's a sequel hope is better than the second raid, cause that sequel really disappointed me :(

Dafuk? TSR was an improvement over the manga, if not the LN, with the re-designs of the Chinese twins and Sagara's prostitute meltdown.

SO HAPPY...yes I've been waiting for this for so long ^_^

Personally, I don't care if it's a remake, sequel, whatever....

Fans have been BEGGING for a new FMP anime, and after so many long years we're finally getting it.

this does nothing for me but that's only because i only watched like half the first season a few years ago...it's hard to watch old stuff in 480p or less been meaning to get back to get it sometime since i liked the mecha aspect


still whenever this airs i'll get around to it.

Yea boy! this is one of my favorite anime I will def be watching this

Dunno what's people so excited about. Saw the first series. Pretty mediocre. Cute Tessa, but it's not like this is a LOGH remake or something.
Well the first season isnt the part people like, but its more because of how no one expected it to actually happen despite being teased for it all the time. its kind of like shenmue 3 with how everyone knew it was a thing but gae up any hope of it every becoming reality. The quality of the 2 have nothing to do with eachother but having to sit on an unfinished story for 10 + years caused more rejoice when its continued than something like LOTGH remake which is already completed and generally no one was really asking for a remake (still appreciated that it is happening)

NOW THAT IS INTERESTING. I just noticed that the announcement came out in August. I hope this becomes big and they get some good AF OST on board.

Oh ok. This is really exciting then! I definitely feel it. I'm happy for those who are waiting even though I'm not a fan of the series.