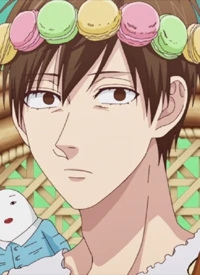 dreami Jul 2, 2015 2:35 AM
welp!! That's great :)
I see Yowapeda is one of your favourite animes, i've had it on hold for a long time because it kinda dragged on for me?? Hopefully I can enjoy it later haha

ibear Jul 1, 2015 10:03 PM
Unfortunately Sport series and english serializations don't tend to mix very well T_T Even Slam Dunk was a relative flop compared to how it was received in other countries. But if you have any other sport manga recs that have been translated I'd love to hear them, I've pretty much ignored sport manga, and most manga in general in favor of their anime adaptations.

Deknijff Mar 23, 2015 4:56 PM
Why does your Favorite anime and then your Top 5 anime lists have different series on them?

Souva Jan 26, 2014 7:44 PM
5 Centimeters Per Second, the movie that has revealed him. It's a 1-hour long movie which tells the story of a boy and a girl, with dreams and hopes, who are separated from each other, and they become adults. It's so realistic that it's depressing sometimes. The themes are : love despite distance, children growing up, speed of life -> human relationships to the MAX !! It's his first non-fantasy work :3

Lately, he reached the peak of 2D animation with The Garden of Words, which is very short, and which will make your eyes bleed tears of beauty. Since Hoshi no Koe, he became a great guy, dammit !! :3

Souva Jan 25, 2014 7:28 PM
Some facts about Hoshi no Koe :
One of the first ambitious works of Makoto Shinkai. He made it in his garage and dubbed it with his wife. Of course the art seems poor.
Whatever the plot is, Shinkai's goal, in his works, is "to depict human relationships", using distance, communication issues, passing time, impossible love, etc... You should give a try to his later movies :3