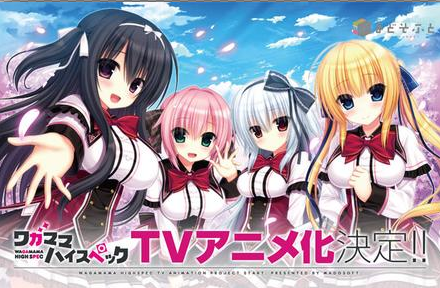 Game developer Madosoft announced at its booth at Comiket (Comic Market) 88, which opened today at Tokyo Big Sight, that its upcoming adult visual novel, Wagamama High Spec, will receive a TV anime adaptation. TG Smart, the website that belongs to Kadokawa's Tech Gian magazine, will publish an interview with the game's producers on August 19. A release date for the visual novel has not been announced.

Synopsis
Even though he's just a student, the protagonist in Wagamama High Spec also happens to be the author of a manga published in a weekly magazine. Since it's mainly an ecchi and romcom type of story, he is actually hiding this fact from most people around him. The only people that know are his younger sister and his best friend.

Seems very generic. I am not watching.

The first thing that came to my mind when I saw those girls: "Fuck you, get lost". That can't be good.

Count me in. Im totally gonna watch this

Look at those glorious art.

Will watch because I don't have anything better to do

Single phrase and one word comments removed.
Chain quotes have been removed as well.
Please follow the rules while posting and don't offend others.

story sounds cliche but we will see

This looks hopeless because this kind of VN tend to play things safe with focus mostly on stupid highschool antics and cute heroines being cute with drama just enough to pad out the plot, which would be boring. On the other hand, i actually enjoy trashy VN so long as it can maintain the energy level high by being over the top ridiculous and nonsensical. And that's what makes Grisaia so enjoyable, albeit in all the wrong ways.

Jonesy974 said:
Oh, so another one of those "kid gets black mailed into joining the student council" shows. Ok.
No it's different this time around bc our main char apparently does not have a name. Very mysterious.

zerorequiem_ said:
Sweet, now we just have to wait for news regarding the studio behind it.
Studio Poop Butt might be up for the job. Or were they called 8bit? Or Diomedea? I don't seem to remember.

IDontWishToBe said:
Adult visual novel....And yet, it will get a TV series? How adult is this thing, exactly? Well, Fate and Clannad were eroges, if I remember well.

Little Busters, Air, Clannad, Grisaia, KoiChoco, Daitoshokan no Hitsujikai, White Album just off the top of my head all had adult versions.

As a VN advertisement, it's highly likely that we won't see the end of its story in anime format. It's just a massive teaser. No ship. Nada.

Adult visual novel....And yet, it will get a TV series? How adult is this thing, exactly? Well, Fate and Clannad were eroges, if I remember well.

My god, this designs are all equal. I doubt something good will came out of this.