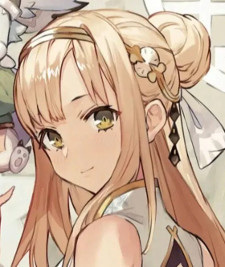 I see, I agree the middle part in Act 2 was really formulaic and unneeded. Though that's funny because for me Osborne is literally my favorite antagonist in fiction lmaoo. Alberich was pretty meh, kinda like a Weissmann but less interesting. The atmosphere was great I agree, especially in the first Act you really feel how shaken was the Empire, and the feeling of having to find back the main character was pretty great as well.
Yeah Rean is my goat, as I already said consider that Hajimari is where most of his development is and where he peaks as a character so I hope you will enjoy.

There's some mixed opinion on having 2 endings, what Falcom planned here was to make you show the first ending but also make you find a "third path" since after all that's the message of the game.

Lmao that's my same ranking, CS3 wins over CS4 by a little but I have to say if Act 2 was just a bit better then CS4 would've been easily better than CS3. Act 3 and the whole Finale was for me one of the best parts of the entire series.

Haha yeah contrarily all I think about everyday is Kiseki lmao... It's been like this for more than a year now I need help ^^'
I think I've never been so excited for something before tho, especially after playing Hajimari that Kuro PV is extremely hype enducing. Imma preorder that limited edition soon no doubt, will be extremely hard to wait for the spreadsheet tho.

Hope Haji releases soon for you! My fav game, can't wait to see some reactions of certain scenes.
Rean in 4k looking good

Aoishi May 20, 4:35 PM
Ayy good to know, enjoy, can't wait to see your reactions to the final parts of the game, where it shines the most.

Thank you very much!

imaclassicman19 Apr 18, 12:41 AM
Yeah for sure you got a very favorable draw. If I had to I would bet money on Real. I would also in addition to Kante keep an eye out for Mount and Pulisic as they can do some serious damage. Other than that you don't have to worry. Werner will still run around like a headless chicken and German James Charles will pose no serious threat. Also, you can count on Rudiger to gift you a goal or two.

That win against Man City was just lucky. City just weren't trying which makes sense since they have other pressing matters such as the League and the CL.

Man U fans are actually the most annoying things on Twitter. All they brag about is Penandes🤡

Please kick Chelsea's ass in the CL, their fans are also really annoying.

Which club do you support?

Aoishi Apr 11, 1:28 PM
I see, well take your time, if you do all side quests like me CS4 is easily the longest game in the series (clocked 170+ hours kekw). I forgot you could carry CS1/2 data, I couldn't even carry CS3 since i played them on Steam so yeah.
Hajimari carries data from CS4 and Ao no Kiseki Kai iirc. Pretty cool lol.

Aoishi Apr 9, 11:25 AM
Yeah I agree. I don't mind the academy setting of CS since its extremely fantasy anyways and it doesnt really feel like "school" considering during the entire time in CS1 C7 travels Erebonia to fight terrorists lmao. But in case of TX the modern era + school kinda bothers me.


What’s not so impressive is how tropey their writing is
I thought so indeed. The game really seems just like Falcom one day woke up and thought "why dont we make The Legend of Ys: Trails of Persona" honestly lmao (based only on what i've seen ofc). Kondo too doesn't really seem to care much about TX, he's fully invested in Kiseki and Ys atm.

Ye Ys VI was kinda mid, the engine was at its beginnings so its understandable. Oath is already a lot better and fluid... Although I'm fucking RAGING at CHESTER (2nd fight) i swear to god hes worse than Dark Fact.

The first pair of games was quite nice considering they were 1987 games originally, no doubt about that.
Ys II was pretty easy for me overall even in Nightmare, Dalles was quite annoying at first but it didnt take as much as Fact ofc.

Yea I think its the best one so far although as I just said I FUCKING HATE CHESTER. Also i have an idea about the plot twist, let's see if its just like i thought or if Falcom will get me again lmao.
EDIT: Nvm just destroyed his ass after grinding some level, get fucked chester

Today it released! Enjoy. No spoilers but I guess you will know the answer to the first two questions soon ^^
Rean won't stop, its useless to even try, he's probably gonna headpat Aidios at this pace...

Oh Tokyo Xanadu. I'mma be real that's like the Falcom game that I least wanna play rn lmao. Seems like a cool game but rn I really love me some fantasy vibes, so stuff set in modern eras don't appeal me much, but I still wanna play it when the time comes, also yeah it's cool how filled of references the game is lmao (Still hoping for a real Ys vs Sen, or at this point Ys vs Kuro).
Actually I'd love to play all the Falcom localized games and also try to 100% them; it is what I'm doing with Ys now.
I played Ys I, II and VI (Ark of Napishtim), played all of them in Nightmare and have 100% achievements somehow haha... I don't wanna see bats or hear the name Dark Fact for the rest of my life...
Currently on Oath in Felghana and holy fucking shit Nightmare is hell I am scared for Inferno honestly... But yeah im gonna try it anyways, will let you know if I succeeded lol. At least Oath should be the hardest one, so once I'm done I can relax.

CS4 releases in 3 days, get ready for some peak fiction. As I already told you iirc the game starts absolutely great, while Act 2 (Which is about 30% of the game, depending how fast you go) is pretty fillery and the reason why the game got slandered a lot. Once you pass that you will reach the godlike Act 3 and Finale which are one of the highest peaks of the series; so dont worry, if you liked CS3 you will love CS4.
Hope you PC-only will be also able to experience Haji because that's pretty much my fav game of all time and its always great to hear reactions to certain scenes haha.

Once I'm done with Ys I'm curious to try Zwei, seems like a pair of really charming games...

Ryuseishun Mar 25, 9:59 AM
Well fuck, it seems that I wasn't able to save the review properly. Tbh, I've been fed up with the recent MAL issues of prematurely submitted "final" reviews :(
All Comments