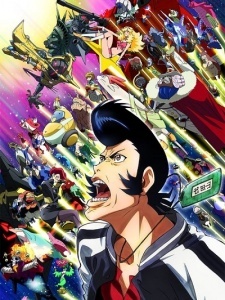 Wiziliz Dec 29, 2015 4:53 PM
Trust me, when you watch it you'll wish it had about as many episodes as One Piece xD
The only bad thing about it is that it has a really slow start but it is so worth it.

Wiziliz Dec 28, 2015 8:56 AM
After looking in your favourites I can say, you have great tastes baby!
If you're a Space☆Dandy fan, you'll love Gintama (it has a slow start though).

Thank you very much for your interest!

The new layout of the next release should fix your problem!

Thank you very much!

On the current version you don't have the choice of the source so it is kissanime.com by default which means most of the airing shows will be added soon after their releases by the fansub groups (horriblesubs in our case). I'll try to make the next version so that the animes can be watched as soon as possible. Thank you very much for your interest.

BishounenTatsumi Apr 3, 2015 2:56 PM
That's a fair and pretty common opinion about Tokyo Ghoul root to be honest, and I don't blame you. As for me, I think not only was the animation of poor quality (for a show with a lot of popularity), the efforts of dragging out certain scenes was more then taking the piss and that doesn't even include the long walking scene in the last episode. As for the last episode itself, although like you say hearing Oshiete again was quick awe-inspiring it wasn't enough to pull the episode out the gutter. Also Hide is dead. That is just bad. Anyway, I could actually go into more detail about what I liked and disliked about TG root but I shall not bore you, I'm sure you don't want to hear.

As for TG:RE, I'm sure there will be an anime adaptation of it eventually. There is definitely not enough manga material at the moment so it's a case of waiting or doing another anime original again but we know how THAT ended up.

You'll have to let me know what new animes you have/will be picking up!

BishounenTatsumi Apr 1, 2015 7:25 AM
Oh right, well I guess that makes sense :D Although I reckon it would be more interesting to make it region based. Then again, it's your city so you choose the rules.

Well you didn't waste no time finishing those shows did you :D
What did you reckon to the TG Root ending?

BishounenTatsumi Mar 29, 2015 6:14 AM
No worries man, a late reply is better then no reply.
Roundabouts?! On that note, maybe you can answer this about the game. Can you determine your city location? As in like for example, we over here drive on the left side on the road whereas everywhere else drives on the right side of the road. So is that just an option or do you have to choose a region?
I would definitely recommend waiting until the summer sale, or any kind of sale though.

Well that's a fair enough rating. I mean if I had to find some flaws in it, it would mainly be biased judgement against certain characters but hardly any show is without it's flaws.
You've got a couple of more shows to finish before the new season starts :D

BishounenTatsumi Mar 26, 2015 10:50 AM
I don't know why but I cannot get into SimCity for some reason. Or maybe it's the same way you don't enjoy RTS games, who knows. As for Cities:Skylines....wow that has an amazing popularity on steam! I'm surprised I didn't notice it sooner. It actually looks like a pretty clean and well made game but that's just from appearances.
Well I'm sure you'll get it before me so you'll have to let me know what you think!

Kiseijuu....Well I'm happy with the ending but most animes that have to have closure on the last episode always feel empty so. It was quite a cheesy ending to be honest but I enjoyed the show and gave it a 9 regardless.
What did you think?

BishounenTatsumi Mar 24, 2015 12:59 PM
Well the day we have the technology to actually see this planets not from a telescope, but from a human perspective will certainly be an interesting day. I suppose we're making little steps at a time with robots actually visiting planets. It's just a shame that you and I will most likely be long dead before we even come close to seeing these things happen.

Rhyming for the nation! But anyway, you hate CIV but you like city builders huh. So I'm guessing AOE is out the question of a city building-like game you would like? What building simulation games do you like?
All Comments