by Sakana-san
Jun 11, 2015 2:20 PM | 21 Comments
During the live-stream of the Majo Labo! program, it was announced that Kakusansei Million Arthur will be receiving an ONA adaptation. The ONA will be based on the official 4-koma web comic and will run for four cours, debuting in Fall. 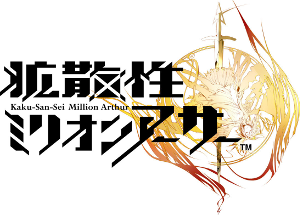 Some cast members were also announced.

Kakusansei Million Arthur is a card-battle game based on the legend of King Arthur. One million people also claim this title, wielding their own Excalibur. Developed by Square Enix, the game was originally released on iOS and Android in 2012 and since received a PlayStation Vita and Nintendo 3DS version in 2014.

The comic is based on the game and is drawn by Choboraunyopomi (Ai Mai Mi). It was published online in October 2014 and currently, there are 17 chapters.

Why based off the 4-koma though? I feel it'd be better if it was an adaption of the actual game.

Square Enix o.O.Please no just no after gunslinger stratos just no....Just kidding i will watch it anyways lol.... xD

This will be shorts??

Sakana-san said:
The comic is based on the game and is drawn by Choboraunyopomi (Ai Mai Mi). It was published online in October 2014 and currently, there are 17 episodes.

Shouldn't that be 17 chapters?

RarePepe420 said:
I got that obnoxious Excalibur song from Soul Eater in my head now.

I guess I'll watch it, I mean it's getting 4 cours so how bad can it be... never heard of the game/manga/whatever before though.

i will give it a try

Oh great,I'm sure it will be amazing =)
Sounds interesting enough to not be total bs...

Sounds interesting, maybe i`ll give it a shot.


Psajdak said:
So, Kirei is the king, and Kiritsugu is a horse.

I got that obnoxious Excalibur song from Soul Eater in my head now.

Also this looks iffy but hey good luck to it.

So, Kirei is the king, and Kiritsugu is a horse.

Jouji Nakata alone will be my reason for watching. Hopefully it'll be decent though.

How the hell does Choboraunyopomi get some many anime adaptations? I just don't get it.
It's not like their stuff sells and it's really not that funny, well, it probably doesn't cost much to make either so I guess that could be a reason.

Will watch, hope it doesn't have drama.