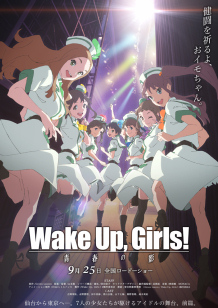 Wake Up, Girls! is an original anime produced and directed by Yutaka Yamamoto. The TV anime aired in Winter 2014, with the prequel movie airing a day prior to the series' broadcast date. The series also received a spin-off anime in Fall 2014, titled Wake Up Girl Zoo!.

The movies were originally announced in December.

I'm really looking forward to movies and possible sequels. Other idols series are just... not sure how to describe, "easy-going" maybe. That attitude isn't bad but when all of them follows same path, it feels meaningless to watch (probably I just don't understand what exactly idols shows are loved for). This series, on the other hand, gets my interest with its more realistic reflection of how that industry actually works, it's more serious etc which is why I love it. So, I hope they succeed so we get more sequels.

Nice to see more of this, although "Beyond the Bottom", really? We'll see what these will be like, I guess. Still, hoping a lot from these as sequels to about the only decent idol series.

Can Yamakan just let this die?

Only hope these pave way for a 2nd season.

Not a big fan of this franchise tbh.

I'm hoping the films will at least have some better songs.

Will they release the BD on the same day as the premiere day again?

Not a big fan of WUG, but will watch I guess. Hopefully it'll contain some decent performances. Love Live! is still better by miles though.