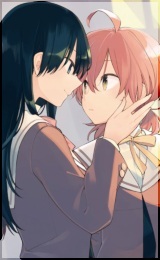 dylelouch Apr 23, 2021 2:37 AM
Yes, that's true. And it makes sense that the last chapter was just before the main impact of the pandemic. Thanks for answering, hoping for new chapters to be released soon.

thanks for creating threads 5-7.

Zadion Oct 27, 2019 4:57 AM
Oh, that's fair, although I guess the general sentiment is still accurate in that you've a huge history with Japanese media.

Ishuukan Friends was a really early anime for me; spring 2014 was just after I began getting into anime as a medium and when I discovered and started experiencing seasonal shows, Ishuukan Friends being the first one I picked up... so in that sense, I have a sort of nostalgic fondness for it. But even at the time, I remember thinking of it was a lukewarm cute slice-of-life with a disappointing, traditionally inconclusive ending. It was endearing, but I couldn't imagine preferring it over the greats even in its own genre. Did you read the manga?

ef was a lovely show, indeed, although I enjoyed it for different reasons than Ishuukan Friends I noticed the similarities. ef, at least, has the benefit of being a complete story.

Zadion Oct 14, 2019 5:39 AM
Heya! Stumbled upon your profile in a Babylon discussion thread. For someone with such a huge history in anime I find some of your top 10 choices interesting, especially since you read -- and translate! -- manga too. What is it about Ishuukan Friends that makes you consider it at the very top echelon of anime?

Roloko Jun 10, 2019 9:29 PM
Its nice to see another person who loves both Louise and Saji! They are my favorite too and they were what actually got me into Gundam 00 and the Gundam franchise as a whole!