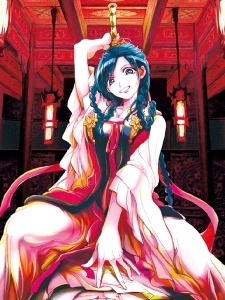 Syreid May 30, 1:46 PM
Aha, I've actually not read magi lol. Just saw the anime and liked her in it. Though I have started the manga awhile ago but I'm barely halfway through.

BxtchGimmeATxtty May 12, 9:45 AM
bitch gimme a titty

Happy Birthday Roloko I hope your day was fun with thrill, chills, not too many bills and hopefully some relaxation XD but seriously I hope you and your loved ones are staying safe and healthy during these crazy times and that today left you in particularly high spirits ^-^

Oh God! I still purchased GTO because it's my favorite. There's a reason for that though, I went to our local bookstore and they still don't import the new Full Metal Panic omnibus light novel. And I can't wait to have it so I just purchased it along with GTO. I now need to control myself wait 'til Black Friday before buying again.

susisa_tagumpay Mar 2, 6:54 AM
Yeah, the final arc was weak, nothing compared to Magnostladt (the heck with the spelling haha). Was expecting her to die too and the sudden change of her attitude doesn't suit her. I much like her though in that state, not her delusions to God state even brought her to become the leader of some scary cult.

Imagine, they hold Magi hostage. Oh well, I liked more the manga, so yeah, they can keep it to themselves. When Funimation still had the rights through Fullmetal Alchemist Brotherhood, I still don't have the means of buying it. Now that I have, it's now on AoA. Better be salty than give them my money. I had all the manga of both Magi and FMA anyway.

Yes, of course, I happen to hoard last November and December. The early holiday season sale, Black Friday, Cyber Monday and I even bought two orders for the Year End Sale. I split it in two just to evade taxes in my country (of course this isn't an illegal way of tax evasion). Optical media disc import that is worth $200 or more will be taxed here, that's why I split the orders in two that shipped in different courier, one express and one economy so that they will arrive in our port at a different day (oh crap it's like I've really done something wrong for me to explain it haha). Since I've done import, I don't have access to RightStuf's free shipping, so I've got to consider the shipping fee.
I bought limited Ed's for Sentai's Chihayafuru season 1 and 2 that are priced more than a hundred dollars. The other one I think almost reached $200. But bought them at around $50 for both and it's not barebones like Aniplex of America stuff. I also bought some Sentai that are priced 6.99, 7.99, 9.99 just like you do. I was salty at the Rozen Maiden 2013 though since when I'm about to order that one, I delayed it and said "I'll play Soul Calibur first". After I'm done playing, the Rozen Maiden was nowhere to be found hahaha.
As if that's the first time happening. I never learned my lesson. At around early holiday season sale. I happen to catch the limited edition of Code Geass complete with all the extra stuffs at around $30 I think, that's a steal right? But I also delayed it for a day. And then you probably know what happened haha.

But these Sentai titles I was talking about is not something that included in those holiday season sale (though every year would probably be much different). I like to purchase GoShogun or Macron-1, Dancouga, GTO stuff like that. These titles I think had the same style with Rayearth and Monster Farm that I've got. But I guess I will listen to you and wait. Because upon searching, they had a sale on these stuff at around 50% off. Yesterday, they were somewhere around 30-40%.
And before I forgot. That was clever. Mixing the title and the name of the heroine. Haha!

I'm salty with Tusk. She, I mean, he got a much more wonderful pink mech than Vivian's Razor. Haha.

Of course, there's no best girl other than Beauty Thief (the title says it all). That was my favorite scene in the whole game. My tummy hurts laughing all the time, that hurtful feeling that you will have an abs just by laughing (in contrary, my stomach seems to be shrinking).
Fans of Persona 5 be like "Morgana stole Haru's spotlight". When she's shining much better thanks to Mona's drama. Her true awakening was my favorite too. Milady surprised me by showing her arsenal hidden under her skirt. Yeah, that's badass! Hahaha.

I came across your page while I'm being indecisive.
I was browsing at RightStuf because it's a new month and this would be my third expense of the year (for luxury stuffs, you know). Then some of the anime that I really want that was picked up by Discotek or Sentai were on sale (not that grand though). I told myself over and over that I don't mind buying them at those price. So yeah, I should have checked the order out right away.

On second thought, they are somewhat expensive to me at the moment due to stock market crashes. My active income stream in our store is just so so due to having many competitors that popped out like mushroom here in our street. Haha!
Without friends to help me or I just don't want to bother them and it's late at night here in our country anyway, I just googled if it's okay for me to buy anime DVD's/BD's. Just to give myself a surefire permission to buy them even though if I would think rationally, it's not okay to buy them.
I came across some forums that weren't really helping me anyway. Until I came to this thread in MAL about the overpriced Aniplex stuff. My God! And they have some of the series I want that of course no person on their right mind would give those money to them haha.

Sheesh and I saw there the super misleading picture of Gyokuen. Of course, as a curious person, I would click it right away to stalk this person who would use Gyokuen as a display picture. Upon opening your page, shucks, the glorious mad hatter Arba in the 25th volume cover of Magi exposed herself to me.

Okay sorry for the long introduction. This is what I really want to talk about. I clicked your extended list just for research. And I saw a familiar face in the character section. I saw this character and I know this character, I say. Yes, it's Hilda. So I returned to your page again and read your next line which is your favorite ships. I was like "if Ange and Hilda were not on this, then this is blasphemy". When I read Garrod/Tifa and Odelo/Elischa, that really put a smile on my face. Much more Elizabeth, fans would simply ship Sebastian for Ciel, ugh! Vincent and Ada okay 100% approved. But I still need to confirm your ship with Ange 'cause I will not tolerate if I read Tusk in there, perhaps Salamandinay is ohhh..KAY! Hmmmm, Embryo.... Embryo.... Embryo will be okay, I guess. It's okay to send him out in harem world so we can let all the girls delete him in every dimension.

Sorry for the long post. Just ignore this. And I would not buy the anime. I will now sleep. But if you waste your time replying to me, that it's okay for me to buy them and they're stilll on sale tomorrow, I might just purchased them. Hahahahaha.

InzDragonblood Feb 27, 6:59 PM
wow you really like it haha to be honest i havent finish it yet D:
All Comments