by tsubasalover
Apr 2, 2015 11:53 AM | 32 Comments
It was announced at AnimeJapan on March 21 that an original anime titled Kagewani will start airing in Fall. It will be broadcast in the new airing block, Ultra Super Anime Time. 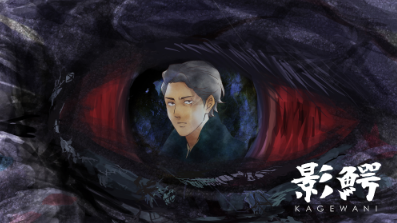 Mysterious monsters that appear and attack in present time.
The people can only be played with by them in this extreme situation.
Why do these monsters appear to attack people...?
Sousuke Banba, a scientist, searches for the truth with the keyword "Kagewani"
A new feeling of panic suspense animation begins.

I think i saw that design before but yeah i will be watching it.

Original anime is usually good news but I'm not sure what to think about this one yet.

Moe Rules Everything Around Me. CREAM Get the money... oh wait.

short? it's remind me to pupa

Sounds interesting, and it's only a short.

This looks like it's trying hard not to present itself as a second-rate horror/thriller anime. But whatever, nothing watched nothing gained. It's short anyway. Guess I'll watch.

By the same guy who wrote Yami shibai XD
Dis Gun B gud :)

The next Pupa incoming!

It reminds me of that other horror series that was announced sometime ago.

Will watch for the mind Bleeps : 0

Nah, it's going to be bad.
Everyone working on it is new except for the script writer who did Yami Shibai, I'm not expecting something much different from that and that wasn't that good.

Sounds interesting. I will be watching.

Since I'm a fan of short anime, I'm surely giving it a try. Sounds pretty promising.

I'm always up for shorts, so sounds exciting!