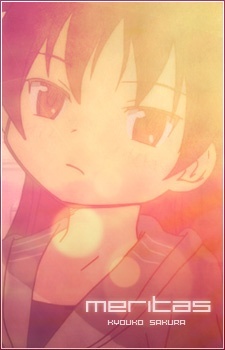 Aragusuku Feb 9, 3:40 PM
Oh, that girl in your pfp is the redhead from Madoka Magica. Took me this long to realize it because of that filter (and because at the time I hadn't watched madoka)

Remember to saved them, you have 30 days to do so.
Enjoy~

i have been wanting to watch this for soooo long and i kept putting it off because i was worried it wouldn't be what i had built it up to be, if that makes sense? i do this far too much with too many shows, movies, etc. and i just decided that i should watch it now otherwise i never will

i absolutely ADORE the 90s art and animation style, i always have. and the attention to detail, the smoothness of the action scenes, the distinct characters are all great. i totally agree with you!! (even though i haven't seen enough shows to properly make that judgement but i'm still making it haha)

Yes, Darker Than Black will eventually fall into the void as time passes as its fandom isn't really big nor "proselityzes" other people. Its funny, though, as there are many, many avatars of Hei around the internet, used by people that don't even know where it is from. I wished it had a fandom, but, to be honest, I like it that way. No favorite anime of mine has an expressive fan community (Mirai Nikki is an exception, I believe), and that's the magic: to like by myself, free of other people's ideas. I like it because I like it and no peer pressure will ever change that.

Dimension W is from Tensai Okamura (darker than black director and creator) as well, and Sidonia no Kishi from Tsutomu Nihei, both of them are my favourite directors

maiawatchesanime Jul 12, 2020 2:46 PM
hi!! i noticed that too hahaha from the forums right? our taste is impeccable, what can i say

are you enjoying it so far? i just finished episode 10 and i'm really loving it :)

Aragusuku Jun 12, 2020 7:26 PM
Yo. Interesting quote you have. I sent you the request because we have a high affinity and I see you're a fan of DTB as well

10k Members Edition & cards here
ctrl + f to find your cards
if you have any problems, message me :)

sorry for the late cards!

Please make sure to re-upload your cards, as imgur periodically cleans old images.

Thank you for ordering!