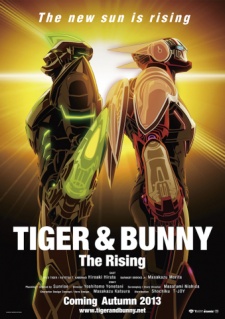 According to the official website, the premiere of Tiger & Bunny Movie 2: The Rising was announced to be postponed until February 8th 2014. It was previously scheduled to be released this autumn. The producers explained that the delay was set to improve the quality of the anime. Unlike the first movie, The Rising will be a brand new story.

Antanaru said:
BoaCC said:
Good news. Need a long break from mecha.
Either you're joking or got shows confused. T&B is not a mecha series...

He was talking about the show called Valvrave which it's currently air right now followed by the 2nd one later this October even though it was made by SUNRISE as well. Maybe it's the true reason why T&B 2nd movie got delayed. Hell, even Code Geass Akito Part 2 had a same fate as well (originally early last year (?) before it move to Summer 2013).

I wonder, would this be a continuation of the end of the series, or maybe a story that takes place during the ten-month timejump?

I'm kind of hoping for the latter, or if it is the former, just something episodic that could maybe tie into a second season (but does NOT try to completely tackle what was revealed at the end of the TV anime)...

so as i thought was the first movie only a recap cause i know that they be doing that a lot.

BoaCC said:
Good news. Need a long break from mecha.
Either you're joking or got shows confused. T&B is not a mecha series...

bippo said:
They have to give way for FREE!. Fujoshi can't buy so much. Good move by Sunrise. Kyoani wins again.

Somehow I don't think that's it.

As long it won't suck like we saw every movies out there which it's bad & corny to me.

Quality takes a lot of time

Ah I heard about this earlier but given the good news of the better quality, I'm fine with it :]

That's okay because they can never postpone the T&B that lives in my heart.

That's ok with me. Sunrise has done a lot of shows already. I'm glad that they postpone it to increase the anime's quality

@bippo
Lol, you are really excited for Free! don't you? XD

They have to give way for FREE!. Fujoshi can't buy so much. Good move by Sunrise. Kyoani wins again.

LovelyGirl said:
Postponed Forever
Is it by Shaft or GAINAX?

I want a second season more, but eh

As long as its as good as the first movie I don't mind the delay.

Yeah I can wait. There surely was a good reason for postponement, and I'd rather have the best product I can get.

Well, it's only by a season. At least they have a confirmed date as to WHEN it's postponed to.