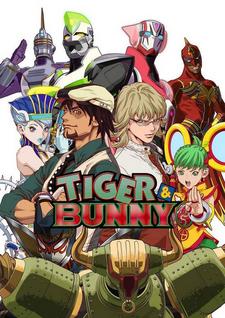 The official Twitter account of Tiger & Bunny has announced that the franchise will be receiving a new anime series. Yoshitomo Yonetani, director of the TV series and both films, will not be reprising his role. More information will be announced at a later date.

The franchise had previously received a TV series by studio Sunrise that aired for 25 episodes between April and September 2011. In addition, a side story film premiered in September 2012, followed by a sequel titled Tiger & Bunny 2: The Rising in February 2014.

A manga adaptation written and illustrated by Mizuki Sakakibara was serialized in Kadokawa Shoten's Newtype Ace magazine from September 2011 to December 2014. The manga has released nine compiled volumes. Additionally, a one-shot, three-volume comic anthology, and a seven-volume alternative comic by Erika Yoshida and Hiroshi Ueda were also published. A video game, stage play and a live-action film were also released.

Viz Media has licensed both the anime and the manga for North American distribution and released the TV series and the side story throughout 2013, with the sequel movie in February 2015. The manga was released in English between April 2013 and November 2016.

blaze3549 said:
Strange things happening in ANIME industry. This anime wasn't even that good. It's not really worth making a second season of it.
Somebody REVIVE manglobe and get second seasons of their shows. DAMN.

The most amusing thing about how the hype around T&B works is that it was originally planned/aimed at Westerners IIRC, and expected not to do that well with Japanese.. and they somehow achieved the exact opposite. XD

Wtf how did i miss this?


Anyway its about time, the series is one the most all time popular anime in japan. Took sunrise long enough.

This is the show that got me back into anime after dropping shows for college and work. Looking forward to the next season as this show always told stories in a very different way than the common Japanese tropes.

a week late but anyway, Keiichi Satou, the first director of the franchise is also not going to be a part of the new series.

Now i wonder who's going to direct this one..

maybe they'll solve that cliffhanger they left in season 1... it's been years jeez

Strange things happening in ANIME industry. This anime wasn't even that good. It's not really worth making a second season of it.
Somebody REVIVE manglobe and get second seasons of their shows. DAMN.

Can't believe this is actually happening, my favorite anime of all the times is coming back omg...

THIS IS VERY GOOD NEWS

Ahh! I've been wanting a sequel to this ever since the first season ended but had pretty much given up hope. Glad Sunrise decided to stop sitting on it with how popular it seems to be based off all those JP polls and the original series' sales. Just hope it stays as much fun (and that maybe they do a little more with Lunatic this season)

Swagernator said:
Rayzer said:
Swagernator said:
I don't know dude, you mentioned Netflix but then you deleted your post so ...
I'm the one who posted that, but I deleted it in 30 seconds.
Because I might spoiled some classified information.
Who knows this was indeed produced by them? (like FLCL)

Now we know the truth of the missing comment.
Your fault not reading the OP bruh!

Lelouch0202 said:
I should really get around to watching this.
Same here, I was trying to watch it on Netflix because I heard it was on there but I didn't see it :(

I loved this anime. I look forward to whatever this new series will be.

Now that's good news! Tiger and Bunny was definitely a show that could use a continuation.

Isn’t that the anime who always gets high in Japanese rankings or something? Maybe i should give this series a chance one of these days.