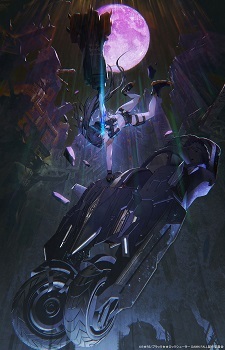 The pilot edition of an original video anime (OVA) based on the music video produced by animation studio Ordet was distributed by Good Smile Company in September 2009. Hobby Japan released the full 50-minute version with its August magazine issue in July 2010, subtitled in seven languages. The OVA was also bundled with Gakken's Megami and Animedia magazines, and Black★Rock Shooter Figma and Nendoroid figurines.

Ordet and CG animation studio Sanzigen produced an eight-episode television anime that aired on Fuji TV's noitaminA programming block in Winter 2012. Discotek Media licensed the anime last December and released it on home video with an English dub on July 27.

Synopsis
On the first day of junior high school, Mato Kuroi happens to run into Yomi Takanashi, a shy, withdrawn girl whom she immediately takes an interest in. Mato tries her best to make conversation with Yomi, wanting to befriend her. At first, she is avoided, but the ice breaks when Yomi happens to notice a decorative blue bird attached to Mato's phone, which is from the book "Li'l Birds At Play." Discovering they have a common interest, the two form a strong friendship.

In an alternate universe, the young girls exist as parallel beings, Mato as Black★Rock Shooter, and Yomi as Dead Master. Somehow, what happens in one world seems to have an effect on the other, and unaware of this fact, the girls unknowingly become entangled by the threads of fate. [Written by MAL Rewrite]

Offline
Jul 2019
490
Were doing this again huh. I guess I could finally watch the anime.
#3
naenano
Offline
Jan 2021
5
Holyyyyyy YES FINALLY I LOVE THIS SHOW
#4
macchiatosonata
Offline
Apr 2018
1
After 14 years, I thought there wasn't going to be anymore new contents, I'm really happy as a fan to come back and enjoy the new anime.
#5
Hakaminah

Offline
Feb 2015
2254
Awesome news to wake up to. I lost interest in anime I used to have and barely saw any anime last or this year, but I'm certainly going to watch this when it releases.
#6
Aeythda

Offline
Apr 2012
13957
Sounds like a synopsis to an old anime, the plot of the new anime is not yet known?
#12
ShokugekiNoRindo

Maybe it will be a full 12-episode remake of, you know, today's trends.

I always thought Black Rock Shooter was by Ufotable, lol.

Offline
Feb 2012
7688
I watched the old Black Rock Shooter anime and I enjoyed it.

#17
removed-user
Offline
Jul 2018
570557
I put this anime on my plan to watch list yesterday and today they decided for new anime after years. Omg this is unexpected af
#18
Illyricus

Online
Jul 2013
15480
Black Rock Shooter is a name I haven't heard in years. Let's see what this new project will end being.
#19
deg
Offline
Jan 2009
82760
i really enjoyed the 8 episode TV series of this franchise, Imaishi can direct some awesome 3DCG battles
#20
RobertBobert

Offline
Apr 2012
13957
LunyRem said:
I watched the old Black Rock Shooter anime and I enjoyed it.

By the way, yes. Maybe it will be a jubilee project?

Offline
Mar 2013
7140
Been a long time since I've seen this name....I always meant to watch the first anime but I never got around to it

Guess I have incentive to do it now lol....Unless this new anime is a remake
#23
Softhenic03

Offline
Feb 2019
2311
HOLY CHRIST, she's back? Like, I always wished for more of Rock, but I never thought it'd actually happen.

And she finally has the Black Trike, too? It doesn't look like the White Rock/Disciples storyline from the background, so that's very interesting.

Fingers crossed it's Sanzigen again, they did a perfect job last time.

EDIT: In fact, if I'm not mistaken, that's an entirely new outfit on her, which means this could be completely different. Very, very interesting.

Offline
Oct 2010
18205
I only watched the OVA and didn't like it, good for the fans I guess
#26
DarkXion
Offline
Mar 2016
16
LET'S FUCKING GOOOO.
Knew something tight was gonna happen once they gave BRS 2012 a dub. I hope they improve on the beautiful CG fights the show had. But full 2D would be cool too.
Can't wait to see what kind of BRS we're gonna get this time.
#27
Agelastus

Offline
Jun 2017
209
Is this real? I can't say I'm a fan of the original, but I did like it. This is the last anime I would think of that gets a new season after ten years, though... Great news
#29
Magito

Offline
Apr 2011
6702
I'm surprise about this announcement. I love the OVA but not so much on the tv series. Hoping it'll be good and see more characters.
#30
Ramkec

Offline
Feb 2012
6474
Damn we live in a timeline where you never know what show might get a sequel or a new version.
#31
Mirai

Offline
Aug 2019
1919
never in a million years did i think black rock shooter would get another anime. i didn't even think people cared or remembered about this anime, or even song.
#33
RobertBobert

The iconic "Hey Arnold" comes from random plasticine crafts its author made in the same competition.

Offline
May 2015
398
Surprised that this got necro'd after all these years now that vocaloids already fell out of relevance.

Given that Ordet is already bust, I'm curious on what studio will take this. One thing's for sure -- if Ultra Super Pictures still has the rights, it might end up in any of its sister studios (Trigger, Liden, Sanzigen, or ENGI). Not to mention that most of Ordet's staff were absorbed to Lidenfilms when it got dormant due to Yamakan's issues and Fractale's failure, while some went on to Lapin Track.

I'm interested on how will this go, but I have low expectations on this given how much of a mixed bag the original series were.

Offline
Sep 2015
24436
This is so exciting! and certainly unexpected
#37
DyceAverruncus
Offline
Feb 2020
29
This has me pumped! The ova and anime series resonated with me on such and emotional level and I can't belobe black rock is finally coming back. I hope this series continues the concept of the other selves enduring the emotional pain of their human hosts. It was so brilliant.
#38
Mario_Isla

Offline
Apr 2014
13318
Damn, I guess goodsmile wants to tap into some of that early 2010’s energy again. Either that or their new BRS figure earlier in the year got a surprising amount of preorders lol.
Looking forward to whatever this is though. I loved the original anime. Not so much the OVA version.
#40
Mario_Isla

Offline
Aug 2012
454
DyceAverruncus said:
This has me pumped! The ova and anime series resonated with me on such and emotional level and I can't belobe black rock is finally coming back. I hope this series continues the concept of the other selves enduring the emotional pain of their human hosts. It was so brilliant.

TBH I barely remember what happened in the anime series (9 years is so much time) but when I hear the op I can understand you, because feel an incredibly nostalgic.

No disrespect but upon reading your comment I had to see when you joined, not that long ago, but you seem to have seen a decent number of stuff... really how can this be that good?
The visuals are the most interesting aspect about and even still, there is soo many better series, definitely forgettable, if I had to say, the art itself for the series is far more memorable than what is animated itself.