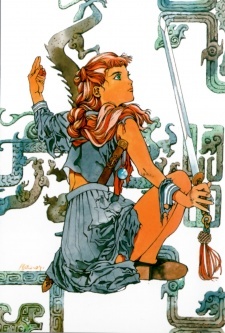 LoneWolf Mar 4, 2021 9:52 AM
I managed to find the rest of 12 Kingdoms on Tubi, which is actually a really great free legal streaming service and they have quite a large anime selectin. Anyway I thought it was really solid, but some of the storylines kind of felt irrelevant like the one about the black kirin... idk I feel like they could have cut out a little bit here and there and focused on the 3 main girls and their journies. I do really appreciate all of the time taken to build the world and characters though. Very refreshing compared to the usual 12 ep formula you get nowadays. I'm gonna tackle LotGH soon, but still got a few more things I want to take on like some of the older Gundam series. I'm actually really enjoying this season... some great sequels and some of the originals are good too like Jobless Reincarnation and Yashahime.

eyerok Jan 27, 2021 8:08 AM
Hey, thanks for the response. Haha, back in the day even I thought I would lkie Satoshi Kon movies. They were highly recommended by people I knew. Thematically, Millennium Actress and Perfect Blue should have been up my alley, but from what recall (and its been more than a decade), I had issues with some specific plot points and execution in those. Paprika, I am not sure can recall properly. Tokyo Godfathers, however, is one of my favorite anime movies of all time. I think Satosh Kon was a natural at character-centric heartfelt comedy drama, a genre I don't think he explored beyond Tokyo Godfathers. I might need to rewatch Millenium Actress one of these days. I recall enjoying parts of the movie a lot.
I was thinking of doing a GHibli/Takahata/Miyazaki rewatch. It's just hard to find the time with so many other things going on.

LoneWolf Jan 6, 2021 9:59 AM
That's so weird I saw Twelve Kingdoms on Amazon Prime and I was like, maybe I should watch it. I think they're missing the last season though so I'll just have to find it the oldfashion way lol. Yeah that seems like a good place to start as far as making a dent in my PTW. I think I'll probably have a good time trying to do my own thing considering how generally disappointing seasonals have been with a few exceptions here and there. A few of my favorites this year are Great Pretender, Dorohedoro, Jugutsu Kaisen and Golden Kamuy.

The anime looks bad, but yeah the music is good. I'll let you know how it goes with Twelve Kingdoms.

LoneWolf Dec 29, 2020 2:27 PM
My watching schedule for anime has been kinda meh tbh. I usually watching like maybe 5 seasonals per season.
I have a very long PTW though and there's so many things I wanna see.

Glad you read it, yeah it was nice to get the e-cred as one of the grandpas of the site (in comparison to most of the active user base). My mind sometimes plays tricks on me and I can be a very conflicted person at times. The site has been going down hill for a long time though, especially in terms of community, but its still a perfectly fine listing site lol.

Been watching a tonne of movies lately though and some series though. Some standouts are Mandalorian, Sweet Home, Run, WolfWalkers and You Cannot Kill David Arquette.

siuol_sward Oct 14, 2020 9:31 PM
Rewatches have their evident caveats, namely that of predictability, but I find that this specific characteristic is exactly what entices me. Being able to reinvest yourself into a familiar show or film, whether it be in the ethereality of Kino no Tabi or the spunk of Cowboy Bebop, is so incredibly unburdening. And of course, sentimentality plays a crucial role, often in which rewatches evoke a nostalgia that can't exactly be captured by a title you're unacquainted with.

siuol_sward Oct 14, 2020 8:37 AM
Indeed, it’s often that I’ll begin a series and decide to drop it for the moment. I’ll generally leave it on “watching” albeit I tend to only watch a single show at a time.

Yes! Rewatching is something I enjoy doing! The sentimentality is often what brings me back to these previous titles.

BiDiGiN Aug 26, 2019 3:40 PM
Hell ye! I haven't watched it but instead read it. The first part of the story is very good too with the rivalry between Joe and Rikishi, though if you want to go through the first part a bit faster I've heard that the last 25 (don't know exactly but something around that) episodes are recapped in the beginning of the second season, I personally haven't seen it and only saw some info on forums but ask your friend if it is worth watching the last episodes that are recapped at the end of the 1st part.

LoneWolf Aug 4, 2019 12:35 AM
I mean there are a few newer directors trying to make waves, but I don't think they'll ever make the same kind of impact as Juggernauts like Miyazaki, Takahata, Otomo and Oshii. Just to name a few though Hosoda, Shinkai (I'm going to see him at TIFF this September for his new film really excited), Keiicha Hara and my personal favorite of the new bunch Yuasa. I just have a fondness for the grittiness of oldschool movies like Ghost in the Shell, Akira, and Jin-Roh though.

Oh gawd yeah it was a little awkward I just came with one friend and he wasn't really even into anime that much he was just kind of a hipster and into "indie stuff" I feel like that movie kind of deepened our friendship... not the type of thing you forget lol. Yeah the original was absolutely terrible, most of the songs were incomprehensible and scenes were impossible to make out. I should honestly just get a 4K TV though I would love to see the stuff I grew up on in a new light.

LoneWolf Jul 9, 2019 9:01 AM
Yeah I wish there was more awareness or like notices of when older anime get proper bluray releases I'm sure a lot of fans of older anime would really like to know. Speaking of Akira though apparently its getting a 4K remaster and the director is making a new movie called Orbital Era. https://kotaku.com/new-akira-anime-project-and-brand-new-anime-film-keep-k-1836122060
I feel like high budget original anime movies without pre-established source material are very rare these days, so I'm really excited. Otomo is very underrated as a director/producer and a mangaka. His last feature work Steamboy wasn't that well received, but I quite liked it.

I'd really like to watch more old anime in 4K, but I don't have a 4K TV lol. I think the only think I saw in 4K remaster was Belladona of Sadness in this indie movie theater is was really intense... not a movie I thought I'd ever see with an audience lol.

Dezaki is very underappreciated. I still have a few things of his I would like to see like the Black Jack OVAs and Treasure Island... considering how much stuff hes done I feel like I shouldn't ever finish but his recent works are not quite as great as his older ones... too bad we won't see anything from him in the future though RIP.
All Comments