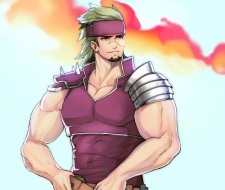 Hammerbreaker 3 hours ago
uh, Doodlebugfour? your respond to my previous comment?

Hammerbreaker Jul 3, 12:09 AM
The newer Fist Of The North Star material has literaly took a fat, gigantic poop on Souther all by their own. they've bombed his entire mascuilinity for absolutely no reason and the fact that they keep casting people with tenor or Lighter Barritone voice-types doesn't help remotely. Akio Otsuka is like the only other voice of this character whoose name isn't Banjo Ginga that I don't think was bad, there's at least some potential within realm in him. I just don't get why the ADR director of that film wanted him to go for an Unsho Ishizuka Voice type. and as for Jamieson, I believe we could have heard of him as this character years ago if the dub of the OG FOTNS didn't got cancelled out of nowhere for some unknown and unanswerd reason, I still don't get why the developers decided that kind of thing.

There's now another subject I want to share with you on. Remember when Autovolt's and Galactic_Cyrus's comments were a thing on BTVA? will I do. and now that the latter has been banned for eternity makes me sad about the fact I'll never get the full context behind what he has written that has been deleted. BTVA without their (and some of the other users that have been deleted from it) comments is just not BTVA for me. it's not the kind of platform I remember, know and love. is there any reason behind all of this? I don't think the owners of it will ever give us an answer as to why this happened anytime soon. do you have some theory on that?

Hammerbreaker Jul 1, 11:12 PM
And the Few casting choices I've made for some characters I've wanted to share with you?

Hammerbreaker Jul 1, 11:01 PM
You shouldn't remind me that as if I'm not fully aware of that, all of us have our own life instead of just staying in home watching random things.

How intesresting. but generally speaking, in what platform you've Exactly sent him that video?


Oh and I shouldn't forgot this, what about the few choices I've made for the characters I've wanted to share with you just so you could give your opinions on?

Hammerbreaker Jul 1, 12:01 AM
Uh Doodlebugfour? are you busy or something like that?

Kurt_Irving Jun 26, 11:47 PM
By the way, I made up my mind and have decided to complete Kurogane no Linebarrel. Yes, I've been putting it on hold for years.

As you can see, Miyuki Sawashiro was once the voice of that tomboy Satoru Yamashita in the Gonzo adaptation.

An early Gemini friend that I know is pretty tomboyish and so was my first Aquarius friend (liked cars, sports and video games; has a big heart for respecting her parents, technically). ^_^

Anyway, this manga is pretty amusing so far after having completed Trigun Maximum (I love the fact that Yasuhiro designed Gungrave characters on time).

Hammerbreaker Jun 23, 11:03 AM
So I have been thinking of some numerous dream cast choices for some characters in my head for quiet a while that I want to share with you and want to know your opinion on those.

first off, the one I've had in mind was Laura Bailey as Shinji Ikari. now as I know, she's no stranger to young boys (ala Dieter from Monster) and I can definitely see her pulling off his sympathy and shyness phenomenally the same way Megumi Ogata did throughout her entire performance.

secondly, I also had the Late John Vernon as Kirei Kotomine. now I believe you have no familiarity with him whatsoever, he's best known for playing Dean Wormer from Animal's House (1978). I'll be glad for you to take a listen to his voice on that one commercial video:https://www.youtube.com/watch?v=0YOhVdXULvY.

thirdly, there's Patrick Seitz as Raditz. Seitz is gladly the person I consider my Ideal voice of the character, he could be subtle and aggresive enough while maintaining the foreboding presence to boot.

and lastly but not least, I would like to mention Jamieson Price as Souther. I was never slightly keen on any of Souther's ENG voices (and any of his JPN voices who succeeded Banjo Ginga), all of them come off as far too young and light sounding and don't have any sort of presence and imposing impact to their takes whatsoever. so I'd figure that if a new FOTNS game will come out, my fingers are crossed on having Jamieson as his voice. something akin to his Lordgenome voice would be a near flawless fit for the character. it has enough bass and lots of presence and menace to add on that.

Hammerbreaker Jun 23, 9:56 AM
The way I see it is because several people online (particulary in BTVA) have that type of theory that they might be too "expensive" in this day and age. could that be genuinely possible?

Hammerbreaker Jun 23, 4:53 AM
Lara Gilchrist (the VA of Susan Storm/Invisible Woman in FF:WGH) deserves to earn the opportunity to voice more characters as of now, this lady has a lovely voice which makes me sad I don't hear quiet often. she hasn't got a role like a decade ago which makes me certain she has secretly retired (maybe that or I'm just making some random theory all my own). both her and Hironobu Kanagawa deserves total appreciation. you're statement on that idea?

Hammerbreaker Jun 20, 9:46 PM
Try it yourself, I believe it will be a good chance for you to recommend them this since almost no one on that platform seems to have any interest in this show for not being... recognized enough I guess?


Oh trust me. His Mole Man is, without any arguments, one of his best voice performances. and I gurantee you will love his take even more once you will watch the show from begining to end. and as for his Jabberwock, The effects added to his voice are very reminiscent to Don Brown's Shenron.

Hammerbreaker Jun 20, 12:11 PM
Something has been crossing my mind for quiet a while, I've been thinking about a suggestion for you:how about you recommened some people on BTVA (8000 Saiyans, PsychicVoiceSpy, GreenGoblin75 and HylianBelmont.) to watch Texhnolyze?! I would be enthusiastic enough to see their thoughts on it once they'll see it in it's full entirety in both languages.

Any regards to Paul Dobson's Mole Man/Harvey Elder as of that matter?

Gotta tell you this, Paul Dobson rocked it really hard as Mole Man/Harvey Elder. his performance still reigns supreme from now on.

Hammerbreaker Jun 17, 1:22 PM
have you watched the Fantastic 4 cartoons that I've recommended to you as of now?
All Comments