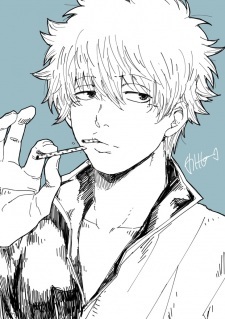 I love reading always have, wasn't til i was 14 however that i got comfortable with English.

I'm a major Fate fan, got thourally ticked at Re;Creators for copying Fate tho... wasn't enough differences for me to judge it as a separate work. I'll prob get to DI after I finish RGD.

I might pick up DL again but on a emulator, my phones at 23 out of 25 Gigas, about 10 of it is games the rest is manga and pics

fatedKujo Jul 22, 2019 4:26 PM
Oh, they did get a new translator a few chapters ago, but I didn't notice a grammar like difference, then again I'm not a native English speaker...reminds me I need to read Dies Irae been sitting on my desktop for ages.

I dropped Dragalia Lost more for its huge size then my dis interest, probably the best story for any gacha game, for a OG it does have good cast. I just read it online now. I've tried time and time again to get into GranBlue decent story I like the cast, just not one for the gameplay

fatedKujo Jul 21, 2019 3:36 PM
I used to get a lot so I had blocked it, later to remove it so a friend could add me, didn't bother to re disable and i don't get em much anymore..tho i have the same person adding me every few weeks, might disable if i get another.

Yeah I'm a massive Fate fan. I've never heard that term, and when I look it up I don't think it is what you mean. I'm not one for gacha games hell phone games in general, I've tried several the ones i still play are because I'm attached to the series it stems from, or its made from certain groups.

fatedKujo Jul 21, 2019 12:17 AM
>Temporarily allowing comments
Wonder how long that’s been going on....don’t know how I even stumbled here in the first place lol

I agree. I'd say the anime did well in executing its comedic timing. Granted, I do think the manga is a lot funnier, but it could just be that I read it first. Other than the low budget, I don't think the anime deserves most of the criticisms it gets. The fact that it now has a score over 8.4 seems to suggest that most people changed their opinion for the better as the show went on.

Yeah, I hear you. Terrible directing really can ruin an anime. Of course, how we perceive the directing of a particular show can vary from person to person. For example, many people think the director of The Tatami Galaxy is a genius, while I personally don't regard him as all that great. Then again, it could be just the work itself that I don't really find very interesting, rather than a fault with the director. I did enjoy Ping Pong The Animation which was also directed by the same guy, but that show won me over with nothing but its stellar character development. I initially hated it while it was airing until I got further into it, all because I didn't like how intentionally awful it looked. Back on topic, I'd say you made a good move to skip Angels of Death, as it has been incredibly dull up to this point. I'd even put Happy Sugar Life over it in terms of creating horror. Killer moe girls are much more menacing to me than a psychotic dude with a scythe and a emotionally unstable girl who just wants to die, lol. :P

Haha, it's alright. It's not as if I remember every name for all the characters I like, either. This is why we have MAL to keep track of all these characters we like. :P

Yeah. I agree with your opinion on AoT. The reason it's so popular could also be attributed to the broad audience it was trying to appeal to. But yeah, characters didn't really catch my attention either. I enjoy it mainly for the plot, action, and music. To be fair, the third season is where the plot finally kicks up a notch, with human vs human on the forefront and killing titans taking a backseat. I'm up to speed with the manga and I can tell you that the story from the third season onward will be mostly about exploring the different sides of humanity, rather than focusing on the war between human and titan.

I know I recommended Hanebado a few months ago, but I take it back (hopefully you haven't already picked it up). It turned out to be a disappointment in my book, featuring some very inconsistent characters and contrived drama that's not even explored well. There are so many better sports anime to watch out there. Go check out Baby Steps if you want an enjoyable series about tennis with tints of romance in it. And I've made a poor decision in skipping High Score Girl back then, as it became one of my favorite shows from last season after I caught up to it recently. The outdated art style is something I got used to within a couple episodes; what really got me into the show was the cute romance between its main characters. Heck, I didn't expect it to turn into a love triangle halfway in, but even then it was done in good taste, and it became hard to root for one heroine without feeling bad for the other one. Definitely go give it a try if you haven't already.

That's cool. I didn't like Cells at Work all that much in the end, since I felt that it got too repetitive with the introduction of new cells that I just couldn't care anymore after a few episodes. It's definitely not a bad show by any means, but I'd be lying if I told you that it was entertaining. If you've seen monster-of-the-week action shows before, then you have effectively seen all of this show; just replace random monster name with random cell name. Of the 4 shows you picked up, only S;G 0 and Grand Blue ended up being positive experiences for me.

I think Shio was truly in love with Satou, and saw her as her pillar of support in life. One might argue, at least early on in the story, that she may have been using Satou to protect her from hostile people. But close to the end of the story, I'd say it was pretty evident that both Shio and Satou love each other unconditionally, and would gladly die with the other person if the situation demands it. For sure, one of the weirdest love stories I've experienced in anime. Considering that both parties are of the same sex and have a pretty significant age gap, you'd think that any romance in it would be played for comedy. But no, it takes itself very seriously. Lol.

Nice! I can't say anything about it from personal experience as I've never used Anki before, but it sounds like a great method to retain information. I have a decent short-term memory, so I didn't have much difficulty remembering stuff in college. Normally reading the textbook and looking at my notes was enough to commit what I learned into memory, although I could have definitely benefitted had I known about Anki earlier. I kind of stopped learning Japanese after college, just don't have the time or the motivation to continue at this point. But good luck to you if you're still keeping at it! :)

Dashiawia Sep 13, 2018 7:42 PM
Ah, good luck toughing it out. I'm currently doing networking as a profession, and I can't say that I don't enjoy it. I don't know a lot of programming, to be honest, but I intend to learn at least Python since it's pivotal for automation, which significantly speeds up completing repetitive tasks.

Sorry it's taking me so long to get back to you. Work has been especially busy for me during the past two months, and I'm not terribly motivated to type long replies during times like this. I will be sure to reply when I get that motivation back, though.

DeadIEnd Sep 5, 2018 8:28 PM
It would've been funny if they got to the cell phone prohibited ramen place scene just as you were eating ^^

I wish we had such authentic Japanese restaurants with Steins;Gate in the background, the latter is not likely ;.;

I'm fine, how about you? :)
All Comments