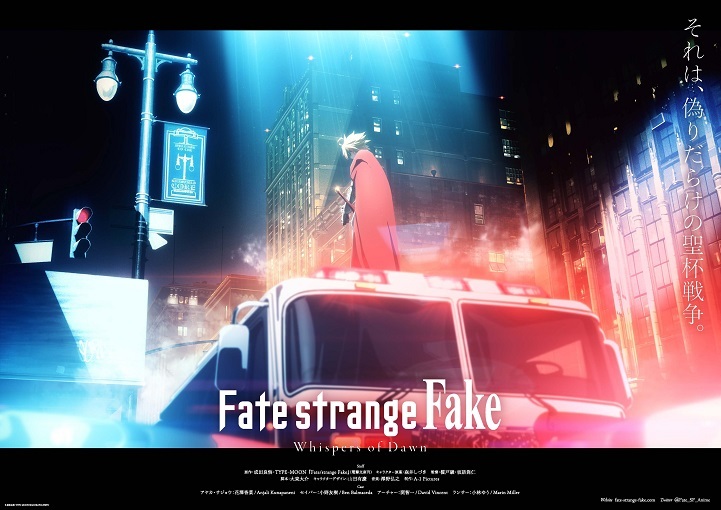 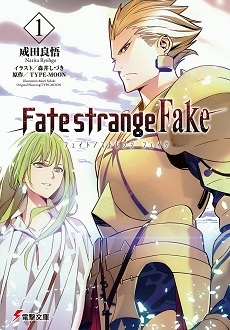 The text—Fake/states night—was originally placed as an April Fools joke on Narita's homepage, presented as a prologue and introduction to a role-playing game. The second volume of TYPE-MOON Ace reissued it as a stand-alone novel form under the title Fate/strange Fake in January 2009.

Type-Moon concurrently began releasing a manga adaptation by Narita and Morii digitally under its Type-Moon Books imprint the same month as the light novel, with Kadokawa publishing the print version. The fifth volume also shipped on March 10.

A-1 Pictures produced a promotional video commemorating the release of the sixth light novel volume on New Year's Eve in 2019.

Synopsis
Fate/strange Fake centers around an imperfect copy of a Grail War based on the Third Holy Grail War in Fuyuki. Following the conclusion of the third Grail War, a US-based organization with magi distinct from the London-based Mage Association, used data from Fuyuki's Grail War to plan their own ritual. Seventy years later, they used the city of Snowfield as the Sacred Land for their own Grail War. However, they were unable to successfully replicate every aspect of the ritual, resulting in it acting only as an imitation that has lost the Saber class and allowed for the summoning of strange Servants due to the blurring of the definition of a "hero."

Rohngall and his pupil, Faldeus, have been dispatched by the Mage's Association to investigate the city and the state of the war. Faldeus, a US organization spy, has Rohngall sniped upon his arrival, despite knowing that Rohngall is a puppet. He declares that their Holy Grail War has been in development and is real, causing a commotion at the Clock Tower, and that he wishes to "advertise" the project to the Association.

DREAM-T said:
Is the LN already finished?
No, it isn't. Stii publishing.

Is the LN already finished?

After hollow ataraxia. I know someone's going to ask, that's when.

Not my favourite but ok. I'd prefer a sequel to Case Files or anything from Requiem.

big day today for gambling addicts every where

I'm hoping this leads to a full tv anime.

Well, let's see how the combination of author i love and franchise i don't like goes. 1 special episode is too short though, hope a full series comes afterwards.

It already has, out of nowhere an english cast announced ... potential full series is netflix jail, you read it here second.

For one I am kind of sad it's only a Special, but that was to be expected as the author stated there will be no Anime till the original LN is finished. On the other hand, everytime Type-Moon release a Special Episode on December 31st, a full anime is announced and/or released the following year or two (Lord El-Melloi IIs Case Files and Grand Order).

Never heard of this Fate entry but I'm always sold when it comes to my second favorite anime franchise. Hopefully I enjoy this more that Grand Order but the fact that Sawagoat is attached to this makes me hyped

Why, why, why only ONE special?? It needs a full TV adaptation!! I am very happy, but also sad!

Really hope they do TV adaptation too soon!

I thought it already had an adaptation, but well, that's to be expected.

So it should be a full sakugafest.

MegamiRem said:
Why just a special and not a tv anime, sigh.

The Author once stated that he would refuse all Anime adaptations as long as he didn't finished his Novel , so i was septic about the rumor...
But it still get a Special at least , i'm not really disappointed.

Why just a special and not a tv anime, sigh.