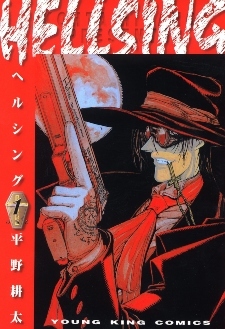 A live-action film adaptation of Kouta Hirano's Hellsing manga is in development, according to entertainment website Deadline on Thursday. Derek Kolstad (John Wick) is collaborating with Amazon Studios as a screenwriter and producer for the film.

Synopsis
For centuries, many secret organizations have taken part in exterminating various types of dangerous monsters. One of them is the England-based Hellsing, run by its cunning leader, Sir Integra Fairbrook Wingates Hellsing. Her greatest hunter, and trump card, is Alucard, an unbeatable vampire genetically modified by her father. Despite him being one of "them," he swore to be her protector and servant.

A new crisis begins and with the help of Seras Victoria, his recently turned vampire partner, Alucard has to uncover the truth behind the mysterious vampire attacks. Not every human is bound to be his ally in this battle, and he will not hesitate to kill anyone who stands in his way. [Written by MAL Rewrite]

Hirano serialized the action horror manga in Young King OURs from May 1997 to September 2008. Shounen Gahousha published the tenth and final volume in March 2009. Dark Horse Comics licensed the manga in English and released all ten volumes between December 2003 and May 2010.

Gonzo adapted the manga into a television anime that aired in 13 episodes in Fall 2001. A 10-episode original video animation by animation studios Satelight, Madhouse, and Graphinica ran from February 2006 to December 2012.

Well, good luck to whoever directs this.

Hopefully it doesn't turn into a netflix death note 2.0 or oldboy (US ver) 2.0

Hellsing isn't the most nuanced depiction of Japanese culture so western adaption is totally fine. It has been proven that mindless action and gorefest are something that can easily be executed pretty well in the west. The most worrying thing is probably now what characters are they gonna cut of for time's convenience.

Hellsing is a pretty mindless action series, being helmed by someone who did John Wick. This is absolutely cool, like there's practically no way they could fuck this up. All it needs is good action and we're good, and I absolutely trust the staff this time around. Why are people comparing this to something that has more meat on it's story like Death Note? Who gives a shit if they give us a black Alucard, just give us the insane action and gore, like who the fuck watched Hellsing specifically for the middling plot?

Bruh John Wick screenwriter, I don't know why you guys are so scared it will be bad

I'm glad Hirano's getting paid but this will undoubtedly be terrible just like every other western anime adaptation.

I always get excited when I hear an action cartoon's going to be made into a film. (And then I often get disappointed, but that's at the end and this is the beginning)

What matters with this adaptation IMO is that it shouldn't be toned down. It needs blood, carnage and profanity galore. Alucard and Anderson need to be off-the-chain, unrepentant, unstoppable and near-insane. Toning them down would be a disgrace.

Let's see how it goes. It's got my attention.

Please no, not one of my favorites, oh god... They're gonna massacre my boy.

There's only one way this can end.