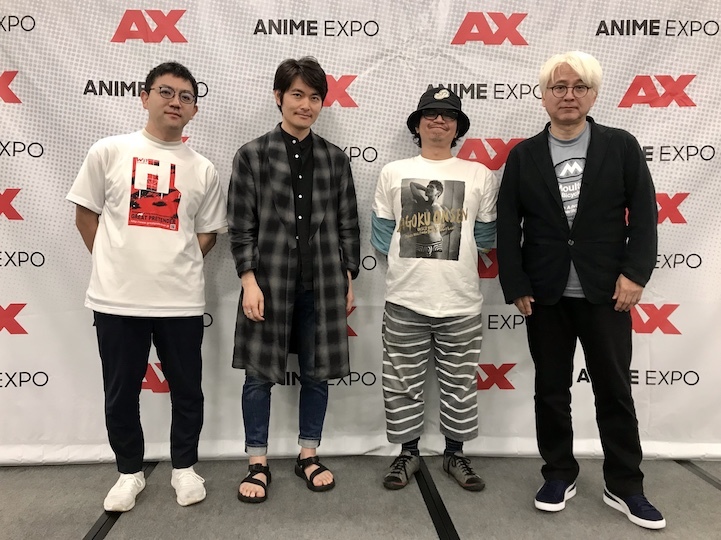 From left to right: George Wada, Ryota Kosawa, Hiro Kaburagi, and Yoshiyuki Sadamoto
In 2012, George Wada and Tetsuya Nakatake, producers at Production I.G, were named President and Director, respectively, of the newly formed Wit Studio, a subsidiary of IG Port. Wit Studio, which has worked on various anime projects, is most notable for producing the anime adaptation of the Shingeki no Kyojin manga series, as well as its original anime project Koutetsujou no Kabaneri.


AT: Since Great Pretender is an anime original, how is the pitch process different or not different from a pitch of an adaptation of a source material like a manga or a light novel?

Hiro Kaburagi: This is a more personal answer. Light novels and manga have the original to follow, so the length can be tricky to format because we have to take that original material and fit it into a 20-minute episode. We're always thinking about what to squeeze in and what's most important.

There's also the fact that these original sources already have fans, so the approach is different. We know we need to make sure the original fans enjoy the material, but we can also bring in new fans by making something really cool.

There's also the fact that we can create whatever we want because we don't have to be tied down to the original. Again, if the original is boring, if the characters aren't particularly interesting, and if the story isn't really great, people aren't going to relate to it. The key is to make those strong characters and great story arcs so that people can really get into it, and that comes with the special attention we give and the experience that we bring to it.

MAL: What real-life element or part of the world did you include in Great Pretender that you are most proud of?

All: Traffic! (Los Angeles traffic was featured in the first episode.) 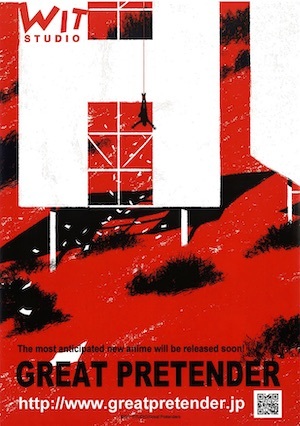 AT: The opening scene with Edamura hanging upside down from the Hollywood Sign is an ingenious way to starting a first episode of a series. Where and how did you come up with that opening scene?

Ryota Kosawa: Since this is the first scene of the series, we really wanted to grab the hearts of the audience. And since we're setting this in Los Angeles, we knew we wanted to make it internationally recognizable, and this [scene] really symbolizes LA. Our director actually went there, as close as he could get. He wasn't on the sign though!

MAL: What particular type of audience would you like to watch this anime?

Yoshiyuki Sadomoto: I've been in the industry for a very long time, I've done a lot of fantasy-type anime, and I've also done a lot of more realistic anime. On the fantasy end, there's Evangelion and that sort of thing, and then there's more Mamoru Hosoda (Ookami Kodomo no Ame to Yuki, Summer Wars) on the realistic side, so there's quite a range. This series is more on the realistic side, and people who enjoy these types of more realistic anime are sort of our target. That doesn't mean we're not trying to appeal to the people who like fantasy as well.

When I was young, there wasn't a word for "otaku" or "anime lover" or anything like that, so I think the people that we're making this for are similar to the "me" when I was in middle school and high school. I really loved Lupin III. Ootsuka was the [animation] director, and he was like a great teacher to me, so I wouldn't say it's just for anime fans, but for a wide audience.

AT: Since Great Pretender is going to take place all over the world, what aspects in the character designs, Sadamoto-san, did you pay attention to in trying to convey people from all around the world?

Yoshiyuki Sadomoto: This is really a story about con men, and essentially about bad guys, but they aren't dark heroes. They're very human. I think they're very lovable characters. I hope, and I think, we did a great job portraying that. I think people will like the characters.

MAL: In Great Pretender, the "good" guys are actually con men (confidence men). How did you want the audience to feel about the morality of the main characters' actions, even when they are swindling the "bad" guys?

Ryota Kosawa: They are con men, but I think the characters are very cute and lovable in their own way, and they really don't trick good people. They're out for the bad rich people. I think it'll feel really good as the audience watches this and feels cathartic. 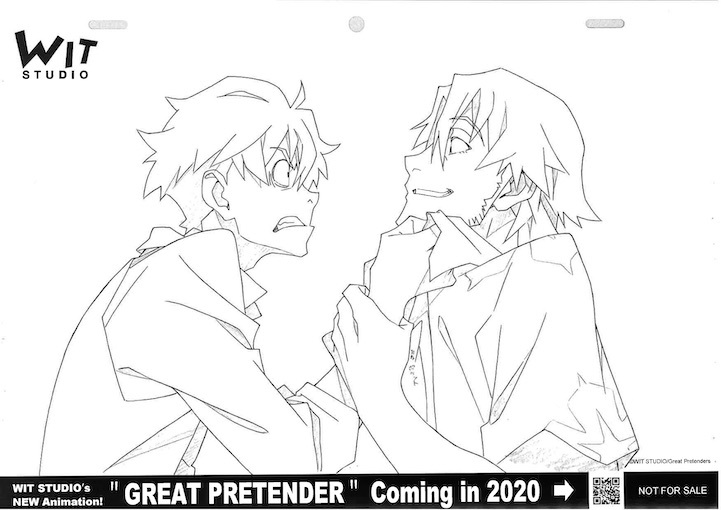 AT: The art style for Great Pretender stood out a lot when we watched the first episode. In particular, we noticed that you had a lot of bright colors, a lot of usage of that. What is the thought process in that particular choice, and was it kind of more difficult to make that anime because of this unique choice? It is something we don't usually see today.

Hiro Kaburagi: This time, the style came in the storyboard phase. We bought a bunch of work from an American artist, Brian Cox, who is not a very well-known artist, and showed it to a young artist in Japan named Shougo, who does storyboards. He drew the storyboards, and Mr. Takeda, who is the head of this art direction company in Japan called Bamboo, opened up that world view by creating a bunch of examples through trial and error. We created this look and wanted it to be a unique look. There's also a very experienced lady in our company, Kobari-san, who was behind the animation, and I think she did a great job. For the first episode, I think the look is still getting ironed out, so it's not perfectly balanced yet, but I think future episodes will look even better.

MAL: Will there be any romance in this anime?

Ryota Kosawa: It's not really a main element of the story, but sure, there's definitely that sort of thing. There's a London section that's all about lovers. There are many cities around the world that these characters travel to, and in some areas, there's more romance. Relationships do come into play.

AT: As noted multiple times, Great Pretender is different from other anime series produced by Wit Studio as it is taking place in a much more familiar world/reality. What was exciting about producing an anime that is more realistic in that sense?

Hiro Kaburagi: At Wit Studio, you're right, it is very rare. We're all based in Japan, so we don't have a very clear image of what the foreign countries that are in our stories are like. The research was a lot of work and was quite tough. I think our image of some of these foreign countries is still somewhat hazy, but it's a really fun story. If you can look past some parts that aren't quite accurate, you can really enjoy the series because it's very entertaining.

MAL: Were there any American or international TV shows or movies that you took inspiration from for particular parts of the anime?

Yoshiyuki Sadomoto: Not for any particular scene, but in terms of having a bad guy as a main character, a guilty but lovable character, Breaking Bad definitely comes to mind as something I thought of while we were working on this.

Hiro Kaburagi: Overall, there wasn't much of a point of reference, just a lot of small scenes and especially some of the little jokes and things. Especially in LA, since it's the town of movies, there are many, and everybody is tries to ask which ones. If you look for them though, they'll be really obvious.

Interview was conducted through an interpreter and has been edited for clarity. Special thanks to Wit Studio and Anime Expo.
Anime ExpoStaffInterview

interesting anime i can say can't wait to watch it ^

Sadamoto's designs are enough to make me watch this, but it seems Wit is really putting their best on this. Really looking forward to the anime.

Thanks for the interview!

Thank you for providing the interview.

Seeing their website ( http://www.greatpretender.jp/ ), reading the plot and then this interview, I really believe this project is a love child of this studio.

Hope it ends up good. Westernized anime here we go?

wow, I hope I can ask them a few questions too.

Great interview, thanks to the interviewees, interviewers and everyone behind the scenes to make it possible for us to read through this!

Definitely looking forward to this, the Studio seems really into it and I’m hoping it’ll deliver in good light!

a confidence man seem like a confident man only

Well, WIT’s original animes are very hit or miss, so I’m hoping for the best

(Just look at The Ancient Magus’ Bride, Attack On Titan and Vinland Saga) ^_^