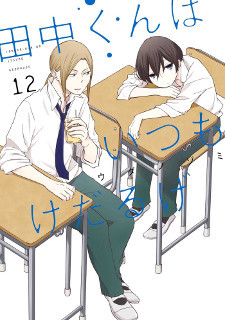 Square Enix's Gangan Online uploaded the 139th chapter of Nozomi Uda's slice of life manga Tanaka-kun wa Itsumo Kedaruge on Thursday, which announced that the series will end with its 140th chapter on July 25.

Uda launched Tanaka-kun wa Itsumo Kedaruge on Gangan Online in July 2013, where chapters are published on a biweekly basis. The manga tied 17th in the top 20 choices for female readers in the 2015 edition of the "Kono Manga ga Sugoi!" (This Manga is Amazing!) annual magazine. Square Enix printed the 12th compiled volume on March 22 and will ship the 13th volume, in addition to an official fanbook, on September 12.

A 12-episode TV anime adaptation by Silver Link. aired in Spring 2016. Crunchyroll and Anime Network Online streamed the show while it was airing. Sentai Filmworks released the anime on a standard DVD and Blu-ray, and a limited edition Blu-ray and DVD combo in January of last year.

Will be sad to see it go. As far as I know translations aren't up to date so there should still be a decent chunk of chapters left.

i hope it's not axed. last few translated chapter is nice shit.

That seems rather abrupt. I hope it's a nice ending otherwise it's despair.

An awesome manga, hope it has a good end.

Seems like a good enough reason for me to finally continue reading it after I put it on hold at around chapter 70. Hoping for a second season of the anime one day too.