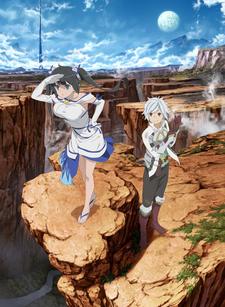 The GA Bunko announcement stage held on Sunday has announced a movie and a second season for the Dungeon ni Deai wo Motomeru no wa Machigatteiru Darou ka (Is It Wrong to Try to Pick Up Girls in a Dungeon?) anime series. A key visual for the anime (pictured) and an announcement video for the movie were also revealed. Titled Orion no Ya (Arrow of the Orion), the movie will feature an original story written by the series' author Fujino Omori. More information regarding to second season will be announced later.

Omori launched the adventure light novel series with illustrations by Suzuhito Yasuda in January 2013. GA Bunko has published 13 light novel volumes under the SoftBank Creatives imprint, with the latest published on February 14. The novel has been adapted into a manga series drawn by Kunieda, which has been serialized since August 2013 under Square Enix' Young Gangan magazine. The manga currently has ten compiled volumes in print, with the latest published on February 13.

The first TV anime adaptation for the series was produced by studio J.C.Staff and aired in Spring 2015 for 13 episodes. An OVA bundled with the anime's Blu-ray box was released in December 2016. Furthermore, a 12-episode side-story anime based on the first four volumes of the Sword Oratoria novel was broadcast in Spring 2017.

when is this anime release? :((

i have been wait long time :(

so uber happy!!! dancing so hard

Hestia is in fact Bastia !

katsu044 said:
first season had like one decent episode due to some good animation ,not surprised by this funny they gave Hestia a more respectable outfit but don't think the lovers will like the change lol

I dont think they gave her a more respectable outfit, rather it should be something she uses later on in LN volumes.
Which I would have started reading by this point IF there were more out.

first season had like one decent episode due to some good animation ,not surprised by this funny they gave Hestia a more respectable outfit but don't think the lovers will like the change lol

Let's Go. I've been waiting for this for ages XD

This was easily one of my favorite 2015 anime, Hestia is in fact Bastia and I can't wait to see season 2!!

Ayeeeeee, as soon as I saw this I felt good.

Not gonna lie I ain't complaining about this since I do like this series a lot. It's one of those fun fantasy-ish series which does well to an degree. Yeah call it baseless mmorpg show but it does what it does which for me its just a fun little time series. Although, as for adaption itself...

Hmm. I think they would be fine, just don't do it like S1 when they went and cramped around 5 volumes, which the first few volumes were adapted nicely the later parts were eh... not that great, but fun nonetheless.

Hell yes! I've been waiting forever for this and I'm happy to find out that it's really happening.

starlessn1ght said:
Zefyris said:
Yes, I thought as much, those guys have been far too good with commercial planning to not announce the second season soon.

Key visual is representative of a place featured only in the 8th volume, so we'll get at least 6-7-8. 8 Is a bit anticlimactic for a series to end though, so they may be tempted to put 9 and 10 and cut everything for it to fit a single cour.

The key visual is to the movie, though.
I know, I saw the trailer. However, that ravine is a very specific place in volume 8, and Hestia doesn't have access to that place at any other time, especially not with her familia leader outside with her as well. So while this is a key visual for the movie, ti's directly hinting to volume 8; and since the movie is an original story, then it's shown because of the series, as strange as it seems at first. Since the two are announced at the same time anyway, it doesn't feel that odd when you think about it. It is, after all, but a first key visual.

I hope Hestia takes her shirt off

noblike said:
Do I need to watch sword oratoria or is season 1 enough to start with season2? Because I heard sword oratoria is only a spin off and a bad one