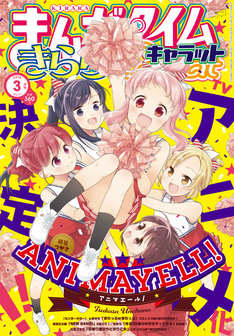 This year's March issue of Manga Time Kirara Carat has announced that Tsukasa Unohana's cheerleading manga Anima Yell! will get a TV anime adaptation. More information about the anime will be revealed at a later time.

That's geared towards females only though.

You mean geared towards fujoshi.

Maelstrom said:
it's not ecchi so whats the point of watching this? a waste of time
This...

I hope wehave some fanservice or Ecchi on it, so it will be more enjoyable.

And Doga Kobo should be the one to adapt this.!

That's geared towards females only though.

Not really. It's pretty gender neutral.

Kohane Hatoya saw a group of cheerleaders cheering for a baseball team at a riverbed.
Doesn't seem like a show I would be interested in, except I want to know why the baseball team is playing in

A Manga Time Kirara anime is pretty much a must watch for me. These shows tend to be very good, and right up my alley.

it's not ecchi so whats the point of watching this? a waste of time

It's Kirara, so i have to watch this.

So much for cheerleaders, it's just another bland 4koma that gets stale after dozen of chapters of cute girls doing nothing. One K-ON was enough, now it's as old and dull as damn isekai series.

The art is really cute. I'd like it to beat my expectations. Hopefully.

Glad to see more cute shows from Kirara plus a cheerleading one which is interesting.

Every slice of life is always welcome

Thank god for Manga Time Kirara. They've become quite a pub over the years. And I keep enjoying everything they churn out.

I'm looking forward to this. :D

Hopefully producer willing to pick older tittle that already finished to make a clean conclusion for it. Well hopefully.
Grand Blue will definitely have an anime, but confirmation of date and staffs has yet to be confirmed :D
Lol that one will save the anime comedy.
It's rare to see full comedy anime without a romcom these days.

But yeah that one was already announced.
I haven't read the Manga, well i did but still holding on due the amount of chapter in past, might pick it again after finishing rereading Black Butler.

Manga Time Kirara, count me in! Been wanting to watch something about cheerleaders anyway