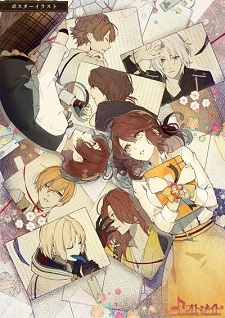 An announcement teaser revealed during Otomate Party 2016, which was held on August 14, that the otome game Nil Admirari no Tenbin: Teito Genwaku Kitan will get an anime adaptation.

Synopsis
The Taishou era didn't end in 15 years, but went on for another 25. In order to protect her waning family, a girl resolves to marry a man she doesn't even know the name of. However, just before the marriage was to take place, the girl's younger brother mysteriously committed suicide by self-immolation and was found holding an old book in his hands. Appearing before the bewildered young girl was the "Imperial Library Intelligence Asset Management Bureau," more commonly referred to as "Fukurou." According to these men, there exists "Maremono," which are books that greatly affect their readers. On top of that, ever since the incident involving the girl's younger brother, she unwittingly gains the ability to see "Auras" (the sentiments of the Maremono which manifest as bright lights and are usually invisible to humans). It was as though fate were trying to drag the young girl in its flames. And then, even though apprehensive, the girl chooses to venture outside her bird cage. Jealousy, hatred, scorn, compassion, and love. What awaited the girl was the darkness of betrayal that had already begun to bewitchingly inlay the imperial capital. Toyed by and swayed within that darkness, will the young girl finally reach the truth after her struggles, or...? (Source: VNDB, edited)

Nil Admirari no Tenbin: Teito Genwaku Kitan is a PS Vita game developed by Otomate and was published by Idea Factory on April 21, 2016. The game was also announced to receive a sequel.

Anyway I'm always up for more otome! Count me in too ^O^
Hisui looks gorgeous xD

I'm not going to lie,I really enjoyed Norn9 so I'm actually looking forward to this, it looks quite cute.

SUZUMURA KENICHI IS ALL I NEED

jks i would have watched this regardless of seiyuu cast
the synopsis and art look real good.

Yeah... well, I honestly love reverse harem anime, but only when the girl actually makes a choice and ends up with one of the guys, even if it isn't my favorite bishounen, I like closure. So while I DO love the character design and the plot is interesting, I'm gonna wait until it's finished airing and then read a spoiler. :/


(la corda d'oro scarred me with lack of choice, giving each guy a four minute ending with her as an ova was cheap, especially since it was obvious that blue cool guy or green senpai should have been her beau.)

And I liked Norn9, but only because I had played the game beforehand. It still pissed me off with poor pacing and focusing on the worst pairing of the games.

Im actually surprised that out of all of the new otome games coming out (4 that are coming out in the US mind you) they chose this one to adapt :o
Unfortunately this looks like it has an overly complicated plot for what im assuming will be a 12 episode anime :T will watch but with low expectations

As a Hakuoki fan I would love the idea of the anime getting a third season but unless Hijikata or Saito are alive there's not enough material for it sadly D:

-Otome game
-Otomate
That should be enough to determine the quality. Decent at best, godawful at worst. Will watch the first episode to see what it's about, but it'll most likely get dropped.

Hopefully it doesn't turn out to be shit but I'm really looking forward to it!

Keeping expectations low for this but the premise interests me somewhat.

The synopsis sounded kind of decent for once. Then I read reverse harem in the comments. Really? -.-'

No mentions of DiaLovers here. I guess Satoi's art did really change.
I will gladly watch this why not. TV anime and Annabel for theme song please.

Not usually a fan of most reverse harem anime, or rather they don't interest me enough to watch them most the time, but I think I'll give this one a go.

Sounds interesting at least, plus I happen to like the designs for both the main heroine and male cast

That's such a bloated plot for an otoge!? Maybe it'll be more story orientated? I'm curious.

*Ugly sobs* Literally anything made by Idea Factory is just AHMAYZING!! I'm obsessed with Otome games and I cannot get enough of Otomate/Idea Factory games. I have a feeling that this one will do well as it seems promising! Yes to reverse harems!!! ^^

I'm always on board for otome game adaptations and reverse harems...I feel like they're the guilty pleasures we don't get enough of so I'm pretty excited ^_^

yuliyana29 said:
The cast tho...but, why I don't see a voice actress listed for the heroine? :(
Huh? Why do you assume that the heroine is voiced by default? This is the

Snow said:
Game Main Cast
and not the cast for the anime version (which may or may not change/add seiyuu). Only a handful of otoge have a voiced heroine...

Edit: Now that I think about it, the game featured quite a number of (side) characters, I hope that that won't be a problem as an anime...

The cast tho...but, why I don't see a voice actress listed for the heroine? :(

As an otome fan I will definitely watch this. And it looks so good!
But Yuki Kaji is literally everywhere. xD