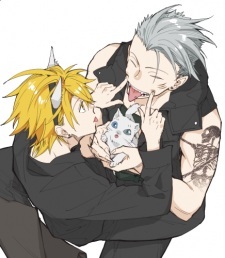 tinyfin Mar 7, 6:51 AM
ooh I'll definitely try and get a japanese account soon then!! it's really good to know that it's possible to play ^^ I can't wait either!!

YES Ryuseitai is so cute!! tbh at first I thought Kanata was a bit weird but as I went along somehow I got rly rly attached because he's just so loveable in that quirky way :D I rmb that exact scene of the flying kiss you mentioned hehe here is a gif I found for you, on loop forever ;)

I love Mam SO MUCH, though I'm slightly sad that compared to other units' MVs, it has the lowest views? is Madara not as loved in the fandom D: it's such a wonderful song and ikrrr his kind smile, and wink too!! <3 o m g you know I almost stopped breathing the moment I just saw that huge image of Rei and Kaoru on my page HAHAHA omgggg I love it TwT I totally get what you mean, they look SO good together, my eyes feel blessed. (oh no, I might need it as my wallpaper now or something because I really love that image)

I only started reading the hypmic manga recently! for the longest time I only listened to their songs, kept looking at fanart and stuff and yet somehow I became this big of a fan anyway xD I keep seeing spoilers about the story everywhere as well which is why I finally started reading, and now I feel like I can appreciate the character dynamics and relationships more hehe. gentaro and dice were actually cute tgt in some parts of the manga aaaah.

tinyfin Feb 21, 8:50 AM
no worries!! I understand that everyone has their own lives~ it's just that I'm quite free nowadays so I'm always hanging around ^^

ooh I see, I'd love to play the enstars game too but needing to download through vpn just put me off. it looks so fun!! I live by watching others play on youtube (gachas are so addictive haha) and reading the wiki hehe. and yes all the fanart omgggg. it's the only reason I even use pinterest, the moment I created an enstars board I just filled it alllll up with all of them :') I love all the characters so much!! my current obsession is ryuseitai and their meteor rangers MV, why is it so cute T__T
I'm super excited about the hypmic game too!! I'll download it for sure when it comes out, and finally, unlike enstars and i7 I'll be able to start together with everyone haha :D do you keep up with the hypmic manga?

omg I just looked up mahoyaku how have I never heard about it before it looks so beautiful! oh man but this one says it's not compatible with my device as well, probably due to regional restrictions.

tinyfin Feb 14, 7:41 AM
nice to meet you :') yesss I'm so happy to find someone else who likes i7 enstars and hypmic too!!
I'm actually still super new to the enstars fandom and just finished the anime! I love them all so much T__T and the new MVs they've been posting on youtube recently are so nice. I can't wait for the longer version of Voice of Sword to come out too <3

Hmatoki Oct 9, 2018 1:46 PM
My pleasure :)
Hahaha yessss! BL is life <3
I have watched Lovely complex several times (about 4 or 5) and every single time I enjoyed it. Still funny, cute and emotional!

Hmatoki Oct 9, 2018 8:46 AM
Hey! Thanks for accepting my friend request!
I see we have a lot of shared anime and the best part that you gave a 10 for Lovely Complex and you like shounen-ai :P

" Many of the guys on this forum are so rude and brutal, I'm glad we girls still have each other's backs! T_T"

Yeah, I used to wonder why there's so few girls/women in anime community, now I know why.

phoenixalia Jan 11, 2017 1:23 AM
Oh no, my parents don't like gay stuff either, and actually, I don't watch yaoi anime either except for sports anime like KuroBasu, Free!, YowaPeda, UtaPri, Joker Game and the like which have subtext. I know it sounds weird, but I watch those anime for the friendship and the sports and the story, not for the yaoi or shounen-ai subtext. As in, I don't go looking for fanfictions or doujins. xD BUT, I am VERY supportive of these anime and try to support yaoi fans as often as I can.

My parents...they don't like gay anime/manga but that doesn't mean they HATE it or LOATHE it. Like, they'd still laugh at it and when I watched touching scenes in Haikyuu!! and KuroBasu, my mom would jokingly ask me when the characters are getting married. xD

Anyway, YOI is different. Like, I'm not a fan of BL manga and anime but Viktor and Yuuri's relationship in YOI brings tears to my eyes and makes me so happy at how sweet, wonderful and REAL it is. Many people avoid YOI because of the 'gay' content but honestly, I think that their relationship is handled so well that I tell people who feel that way that the gay content won't bother them at all even if they don't like gay content in their anime.

Oh, don't get me started on Viktor. That man will be the end of me. I blush and cover my eyes like crazy while peaking a little whenever I see him in the onsen or in episode 10 in the pool. My heart is pounding just thinking about him again. Hehe, Viktor is Yuuri's husband in the anime but Viktor is my husband in my dreams and in my fantasies! :D :D ;) ;D

Yuuri really impressed me. I thought he was going to be, you know, the typical shy, hardworking protagonist and then came Eros and WHOAH YUURI HOLD ON THERE. He honestly doesn't know how seductive and hot he can be be, lol. Viktor is one lucky man.

When Macchachin was alive at the end of the episode, I honestly felt like I was breaking into a sobbing mess, feeling so happy that he was alive and I wanted to hug Macchachin and kiss him and hug him and love him forever. I'd love to read an AU like that too. <3 That would be adorable, SO ADORABLE.

*hugs* Thank you. It was really sad as he was the one I grew up with and I had to say goodbye to him. He was a strong dog till the very end. It still makes me sad that he's gone. I have another puppy now and he's my friend too and I often tell him about his daddy who's in heaven and how that daddy is watching over him (the new puppy).
Ehehe, you're so nice! Yeah, episode 11 was like 'Oh hey, you liked episode 10? How about I make episode 11 the OPPOSITE of episode 10 and make you suffer for one full week mwahahahaha'. Yuuri and Viktor can't live without each other and I can't live without mentioning YOI at least 10 times a day. I'm really hoping the event in April will announce a second season.

I live closer to Japan so shipping isn't that bad for me. I ordered some little merch plus a 2017 calendar and a poster. <3 Viktor looks so drool worthy in that poster. *q* Ohh that must cost a lot! I want it too but money...

And then I started watching all my shows but before I knew it, like a spell, YOI sucked me into it so much so that I sacrificed time and finished my daily duties quickly so that I wouldn't miss the livestream as it aired in Japan. I would have my pillow, my hanky and a snack to keep my company. I'd annoy my parents so much, and my mom keeps going on about 'You are your Yuri!' to this day lol. When actually my husbando is Viktor lol. If I start tearing up in front of my computer, mom is all 'Ah, there she goes with her Yuri again.'

I don't like weather conversations either, I like to keep them short and sweet but I'd watch an one hour segment of the YOI characters discussing the weather. Well, you see, I lost my dog of 12 years of age just two years back so I know how traumatizing it can be. That episode cliffhanger destroyed me and I was crying for Yuuri, Viktor and Macchachin every night before bed. Macchachin must be eternal. She brings so much joy to this world. I think it's a she. I heard it somewhere but I've forgottten where.

OHHH LORD EPISODE 11. DON'T EVEN GET ME STARTED. I was not able to function like a normal human being that week because of THAT DARN EPISODE. I was crying, screaming, crying, cuddling my pillow, worrying....it was awful. Almost as bad as anxiety attacks.

WHEN VIKTOR CRIED MY HEART SHATTERED INTO A GAZILLION PIECES. I put my hanky on the screen and cried with him. That crying was GORGEOUS just like him (Viktor).

*FLIES INTO YOUR ARMS AND SOBS AS WELL*

Have you ordered any YOI related stuff? Like keychains or anything?

phoenixalia Jan 8, 2017 10:10 PM
Oh no, no, I've watched all the episodes. I know what happens. I just haven't updated my MAL because I've sort of um, er...gone into a kind of YOI fever so I haven't been watching other anime either and updating lists properly and...um, yeah I'm mess because of YOI.

I NEED TO SCREAM WITH YOU TOO! *HOLDS YOU TIGHTLY AS WELL*

YOU HAVE NO IDEA HOW MUCH I CRY FOR EVERY EPISODE. LIKE, I could be cheerful now but if you start playing an episode of YOI in front of me, I will LEGIT START SOBBING AND CRYING AND WAIL AND SCREAM AT THE SAME TIME. OMG YOU TOO? Because of YOI, like I said earlier, I haven't been able to watch my other shows like TouRabu, Magic-Kyun, Sangatsu no Lion etc. properly. It's like a disease, I tell you.

Like, they could just spend the day in Viktor's house (Yuuri, Yurio and Viktor) talking about the WEATHER and I'd still cry and sob and enjoy it. That's how DEEP I am in this anime.

This is embarrassing to admit but when Macchachin was sick, I literally couldn't sleep properly for three nights and kept having little nightmares about Viktor and Yuuri because of him. THAT'S HOW MUCH IT AFFECTED ME.

Don't worry about the long blabbers, I'm the same. I SO KNOW HOW YOU FEEL. I love all the characters and I'd love to see more of them, and Phichit is so precious and...I'd better stop now lol.

AkiKitazawa Dec 25, 2016 2:45 PM
I know right? After every episode I checked the discussion thread and every time there were killjoys, like why is it so hard?
Yeah, jeez. It's near impossible to see because it goes so fast and quite choppy animated. Really had to see it screen by screen. But it made me happy nonetheless :D (also hoping for a full version on the DVD or something, it really was too short :c)

I will always love me some more Victuuri, so YES for another season. I don't even know how long it would take me to even get tired of watching them. Like someone said somewhere: it could be all filler of them being domestic as hell and I'd still be enjoying it xD
Though somehow, I feel like I can let go of them just bit by bit, as I have always done

AkiKitazawa Dec 21, 2016 3:42 PM
Hey~ so I saw your post over at ep 12 discussion of YOI and saw you mentioning 二期フォロフ thanks for pointing that out xD made me laugh
Also yes they DID slip in a KISS if you ask me! Great eyes catching that, I missed it first time watching :D 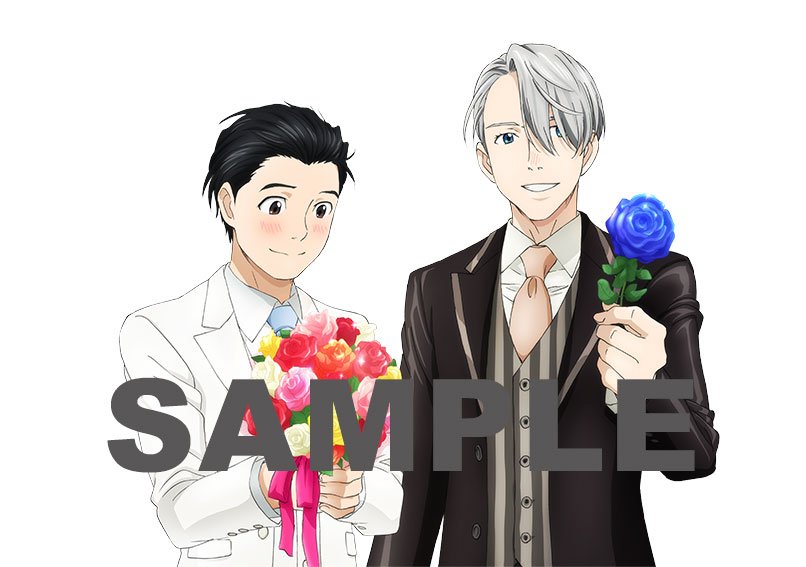