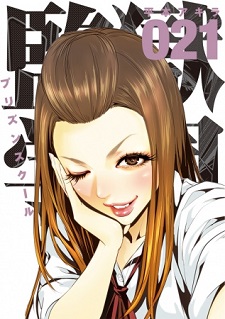 Young Magazine the 3rd has announced in its August 2016 issue that Akira Hiramoto's manga Prison School will receive a spin-off serialization. The spin-off manga, titled Fukukaichou Ganbaru., will begin publishing in the September 2016 issue of the magazine, to be released on August 6, and will feature colored pages. The series itself will be drawn by ReDrop.

The original Prison School manga has been serialized in Young Magazine since 2011 and currently has 21 volumes released. It received a 12-episode anime adaptation for Summer 2015 by J.C.Staff, which adapted content from up until the ninth manga volume, as well as an OVA in March 4 of this year.

This manga is unlike any other :3

More Prison School? Hell yeah. Looking forward to this for sure and that's a nice visual.

Honestly, the current arc is becoming so boring and not funny at all. How many chapters before
the Vice President regain her personality and the end of school festival competition
? I hope the current arc would end soon.

Oh goidness gracious me. Will this be about Black Ant Magic or....more adventures of The Ass?

i just want a second season of anime :(

striderzz said:
GodlyKyon said:
What is this? Who is this based on?

malki said:
I hope it's about the chairman..he's funny as hell..xD
also..the corrent arc in the manga shows no signs to end..it's been so long goddamn it..even berserk will end before it at this rate..>_>

I think it will be abt the Vice president http://www.animenewsnetwork.com/news/2016-07-06/prison-school-manga-gets-spinoff-manga-in-august/.103998 . Fukukaichō wa Ganbaru (The Vice President is Doing Her Best)........

Which is Meiko, the vice president of the underground student council.

Unless they plan on using
Risa from the actual student council, as the underground one has been shut down in the current arc.

cool, prison school is so "epic"!!

Even tho I agree that the original manga is kinda dragging out, I'll still see what that spin off do.

Sounds good, I'll most likely get around to it. Still need to catch up on the main one.

I'm fed up of the vice president at this point

ultravigo said:
at this point the author is just milking this series
True. Where the manga is currently at feels so dragged out it's not even funny. But I love the series so much so I guess I can overlook it. The more, the better I say.

at this point the author is just milking this series

Why the Vice Pres? Doesn't she get adequate panel attention in the manga? If anything this should be about the Chairman.

Drawn by ReDrop and it's about the vice prez? Daaayum.

Not a big fan of ReDrop artstyle but well I hope they step up their game since this will be published on a big magazine or just try their hardest to imitate Hiramoto artstyle.