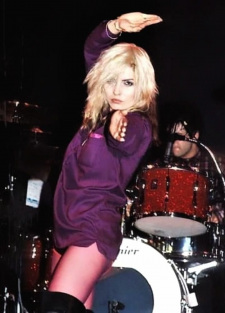 RobertBobert Aug 12, 2:15 AM
Yes, I understand you. Darkness was more inspired by classic heavy and glam rock, while Crashdiet is a direct follower of 80s metal. Both bands write good quality music, but I feel uncomfortable with no heaviness in the music lol.

RobertBobert Aug 12, 2:12 AM
He has black hair, but was so inspired by Alexi that he even tried to dress, cut his hair or look like him in pictures, lol. It might look funny but not surprising considering how famous and influential he was in the 00s.

Gojira? Well, it's mostly progressive melodic death/djent metal about the importance of environmental protection https://www.last.fm/ru/music/Gojira. I live in a green region with mountains and sea, so I can understand these dudes, but radical greens are not really my cup of tea. Moreover, they have had a conflict with the guys from viking metal band Tyr in the past, after the latter considered their criticism of Nordic cetacean hunting culturally insensitive. In general, as a fan of punk and thrash I cannot deny my interest in "political" music, but the environmental issue is too controversial for me.

nervous_sad_poor Aug 10, 11:50 AM
Thank you :D I'm also glad you found a new place. For the moment I'm in my hometown, looking for some new place on the internet. I'll find something until October.

I don't think we've talked that much about it yet. I like some bands though, stuff like Silencer, Lifelover, Austere, Forgotten Tomb, early Shining.

RobertBobert Aug 8, 8:24 AM
Well, there actually is a whole "movement" called Sleaze Metal. These are predominantly Swedish and Finnish glam metal fans like The Darkness or Crashdïet.

Oh, Children of Bodom, In FLames and others were big stars in my country in the 00s. One of my acquaintances was even a big Alexi Laiho's impersonator lol. Unfortunately, I hardly know Finnish punk.

Well, we can talk about their personal life for a long time, but if this is not related to a person's art, then this is another question. I don’t share Gojira’s views, but these Frenchmen are incredibly awesome in their metal skills.

nervous_sad_poor Aug 8, 6:28 AM
I hope you'll feel better soon. They "retired" the band not too long after releasing that album. Some members formed another band called This Empty Flow, they played some gothic rock/post-punk in the vein of The Cure.

Not much, I'm done with my thesis already and finally graduated, everything went very well. I also had to go to Bucharest last week to empty the old apartment because the landlord finally sold it and the new buyer wanted for some reason to move in as soon as possible, so I pretty much had no choice. It was a pain in the ass :)) So now I'm trying to relax, I go outside from time to time for a walk in the park or something, trying to avoid the crowded places. The number of new cases started growing again, but it seems that it may plateau soon. How are you and what have you been up to lately? Also, how's the situation in Turkey now?

nervous_sad_poor Aug 4, 10:51 AM
Kind of the same, if I'm stressed about something maybe a bit later, but that doesn't happen too often. But I'm already used to falling asleep this late, so it doesn't bother me that much.

I'm very glad you liked it :D The rest of their album is also great, you can check it out when you feel like listening to stuff like this. It's called 'Stream from the Heavens'. Sadly they released only one album.

RobertBobert Aug 4, 7:53 AM
I think that Kurt himself clearly did not see a problem with this, since he, like many in the 90s, hated glam. But as glam revival showed at the end of the 00s, glam survived thanks to nostalgia. But grange wasn't the only cause of death for the 80s glam.

At one time they were the only rock band I listened to, as one of their albums was my very first physical release. Before that, I mainly recorded songs on a dictaphone through A-One, the only alternative music channel at that time in Russia and Ukraine. Yeah. Sometimes I think that even if I only listened to Finnish rock music, I would still have a complete selection of quality music from any genre, lol. They even have CHILDREN'S heavy metal https://www.last.fm/ru/music/Hevisaurus through which they introduce children to rock music.

Unfortunately, for various reasons, I stopped listening to them in 00s. About 5-6 years ago I tried to start again, but first their guitarist was sent to prison for kidnapping a schoolgirl, and then Wayne died.

nervous_sad_poor Aug 2, 1:19 PM
Nah, it's pretty much the same as your situation, it's difficult for me to fall asleep, I have to really not concentrate on anything and maintain that state of mind until, basically, I go to sleep. If I just go to bed with a thousand things on my mind it takes me at worst 1-2 hours to clear my mind.

Nice. I love Skepticism, they're among my favourite funeral doom bands and among the first ones I've listened to. I think they create the most unique atmosphere in the whole genre with those organ sounds. I also love Thergothon a lot, they're for me in a league of their own, along with Skepticism.

RobertBobert Aug 2, 11:32 AM
Yeah, he had good connections in the music business and John himself is an incredibly professional musician. Therefore, the quality of their music and its recording has always been excellent. He even produced many glam metal bands like Skid Row.

I was an edgy teen from 00s, Static-X, Rammstein and Turmion Katilot have been on my playlist for quite some time and with the exception of the first are still in it. I have no doubt that you are familiar with Rammstein, but I would also like to advise you on a third group. It's catchy blackened industrial metal from Finland. At one time, the guys were quite extreme in matters of provocation, but now their music is more satire on dance rock music.

nervous_sad_poor Aug 1, 10:29 AM
Haha, nice, that's exactly what you'd call a trve kvlt listening experience. My guess is that I just get stuck concentrating to the music. Usually to fall asleep I need to clear my mind, if I don't do it, my mind starts wandering and I can't rest.

Speaking of slow tempo stuff, lately I've been on a big doom metal binge. I was relistening to some My Dying Bride albums, something which I haven't done a lot for some time. Especially this song:

RobertBobert Aug 1, 6:14 AM
For me personally, they are the perfect melodic metal of the 80s. Yes, they do a very mainstream sound, but at least it's always has good quality. Unsurprisingly, Bon Jovi is the studio owner's nephew.

RobertBobert Jul 31, 2:27 PM
This is my favorite Bon Jovi song by the way :). Well, if you don't get into the nuances, then this is a pretty good AOR, like for a movie soundtrack. Many of these songs are now called "rock anthems" because of their characteristic emotional coloring. Survivor has specialized in this. If you like this trend I can recommend Beast in Black and Battle Beast, metal bands that combine strong AOR sound with power metal.

A good Russian song? Well, I'm not very good at this, but if you want something heavy, then I could advise you Гитлер живёт в Антарктиде, Спортивный метал and Шишки-телепаты by Бездна Анального Угнетения. If you like classic thrash, then there is a group Кувалда in Russia, their song Бетономешалка has even become one of the most famous Russian musical memes. It all depends on which genre and theme you like best.

RobertBobert Jul 30, 9:15 AM
Weeel, AOR is not so much a separate genre as it is the special sound of 80s rock music. Do you remember the song No Easy Way Out from Rocky 4 or Push to the limit from Scar Face? Technically it's 80s pop-rock, but stylistically I could also call it AOR. So, GnR is a long conversation, but I think in the 80s the Scorpions were close to AOR.

I've never been a big fan of Russian rock, but I like Kino and a few metal bands like Kruiz (Aor/Heavy) and Бездна Анального Угнетения (melodic death/metalcore). Since most of my friends were into punk, I know a lot of Russian punk bands, but for me it was like folk music. You are well aware of this, but consider it more a part of culture, than a hobby.

nervous_sad_poor Jul 30, 5:36 AM
Yeah, I knew them both, especially Drudkh whose music I really enjoy a lot. Also, I liked the Dhampyr song, I'm exactly into that kind of atmospheric, instrumental, slow, ambient-ish kind of music so it hit a soft spot of mine :)) I tend to listen to this kind of thing while reading and I wish I could fall asleep while listening to music, but it always fails because the sounds keep me awake. That's exactly the kind of music I'd like to fall asleep to.

There's nothing wrong with daydreaming while listening to music, especially since music can amplify this kind of experience. I do this too every once in a while, but most times I just let myself be "carried away" by the music, so it induces me different images or states of mind. Sometimes through this I can associate colours or even images to bands or styles of music. Daydreaming feel more like I'm in control of the images I see.

RobertBobert Jul 29, 4:55 AM
AOR is a melodic rock genres from the 80s. Not glam metal or old fashioned arena rock, but melodic rock music in a very 80s style. For example, Bon Jovi, Survivor, etc.

I listened to all of their albums, but usually paid little attention to any one separately. I usually remember songs more.