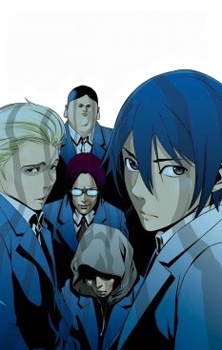 A live-action TV drama adaptation of ecchi manga Prison School (Kangoku Gakuen) has been announced for broadcast in October on MBS and TBS. Noboru Iguchi, who worked as an AV director, will direct the series. Iguchi most recently directed the tokusatsu film Nuiguruma Z, which stars Shoko Nakagawa.

Prison School is written and illustrated by Akira Hiramoto. It has been serialized in Kodansha's seinen Weekly Young Magazine since 2011. The 18th volume of the manga will be released on August 6. Prison School was one of the two winners of the Kodansha Manga Award for General Manga in 2013. Yen Press has licensed the manga for North American release, and the first volume was published in July.

The anime adaptation of the manga series is currently airing.

Yup. That was really unexpected. O_o

This is going to be shit,
live-action can't mimic the awesome facial expressions they've created in the anime and manga. I really liked the unrealistic situations and i feel i'ts going to be so bad done in a live-action series.

Will watch for sure, just to say I did.

have to watch thise

Still trying to figure out HOW this will work

Looking forward to it ^_^

Can't wait to see who will play Meiko ;)

they better not fuck this one up

s2 for Live Action ads anyone?

That will probably be, no i'm pretty sure it's gonna be a huge cringefest

Edit: just saw the cm, yep it's a huge cringefest

not really like live action but kinda looking forward it ..

I might check it out.
It looks good, and unlike SnK's live action, the characters actually look like their anime counterparts.

XxChidoriXx said:
I hate live action anime films, but this one looks kind of nice I have to admit.
Actually its a live action television series.

I hate live action anime films, but this one looks kind of nice I have to admit.

I might check it out.
The cast looks surprisingly good. I wonder if they can act.

like most of the live action, it will be a shit.