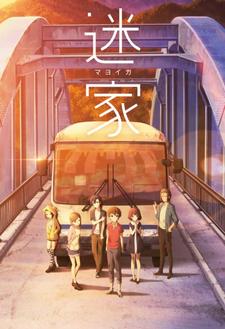 The official website for original TV anime Mayoiga announced that it will premiere exclusively on April 1 on WOWOW channel and later on April 9 on MBS and TBS. In addition, the site posted the cast and key visuals for the new characters. The ending theme song will be performed by Rina Katahira.

Synopsis
30 young men and women who came together on a shady bus tour. The tour's destination: an elusive and possibly non-existent village called Nanakimura. In Nanakimura, one can lead a utopian existence, free of the world's obstacles... or so it was rumored.

The bus headed deep into the mountains, carrying 30 people each harboring their own expectations and wounds in their hearts...

What they had arrived to was an uninhabited village with the lingering faint scents of life, even though it was falling apart.

Just what is the truth of Nanakimura? (Source: ANN, edited)

Wooo this actually sounds pretty good! Can't wait for the thriller part and one goes crazy, everyone gets killed by unknown assailant. ;p But seriously though, depends on how they handle the drama, this could be pretty damn amazing.

Synopsis is realy interesting, should be good!!!
Thanx Nya !!!

how did I miss this? Very exciting to see they have strong cast.

This series gives me some vague feelings of Infinite Ryvius, which was a series I liked. However, the staff behind it is not reassuring. Mari Okada has a spotty record (IBO is doing alright, for now), and I can't say I'm really impressed by any of Mizushima's work. This series still seems worth checking out.

this anime looks really promising!! hopefully it lives up to the potential it has just based on that synopsis :3 it'll be interesting to hear these new voices as well!

I guess I'll give it a shot.

@Mezter These shows didn't leave much of an impression on me but here we go: AnoHana was fairly good in big part thanks to technical aspects and had a solid story but as far as I remember it got overly dramatic at the end. Still, good but not great. Sakurasou... This sure was forgettable, I remember only standard and rather bland characters and forced drama. Toradora was disappointing. It looked like it could break from "another Kugumiya Rie clone" shell at first but it still sunk into depths of cliches accompanying her characters. And Hanasaku... looks like I couldn't get past 15 episodes. I can't even recall why. Probably boring or annoying characters coupled with dull plot.

It all had to be really lacklustre if that's all the impressions I have after not that much time to be honest. It's an epitome of mediocrity, so bland you can't even muster any emotions about why it's bad.

Of course I'm not putting all the blame on Okada or directors, since there's so much you can do with bad source material, but if a writer or a studio is involved in many bad or mediocre series over and over again you start to get wary of them.

To make it simple, most of these titles are like soap operas or Hollywood summer romantic movies. They are popular and might even have high whatever ratings but it still doesn't change the fact it's basically the same bland and low quality thing in a different wrapping. You've seen one, you've seen them all. And don't want to see again.

Mezter said:
Just because you don't like those genres/anime does not mean the show is bad.
I don't judge a show just by whether I like it or not.

Sounds very slow paced...if only this had horror in it.

Many new seiyuus here and the story seems interesting.

This looks to be very good, yeah!

Antanaru said:
Mezter said:
Well interestingly the rest of those anime which are 'mediocre or just plain bad' are rated quite highly in this website.
Right, because scores on mal are such a good indication of show's quality... Popular is not the same as good.

Although MAL cannot be an absolute indicator of how good a show is, it provides some idea of how good it is.

Just because you don't like those genres/anime does not mean the show is bad.

Antanaru said:
Mezter said:
Well interestingly the rest of those anime which are 'mediocre or just plain bad' are rated quite highly in this website.
Right, because scores on mal are such a good indication of show's quality... Popular is not the same as good.

No, but it does mean that you're in the minority. MAL can be a bit of a crap shoot at times but something scores high because many people like it. It doesn't mean you'll like it of course :)

Personally I think that AnoHana, Toradora and True Tears are among the best in their respective genres. The others mentioned I would consider good to great.

Mezter said:
Well interestingly the rest of those anime which are 'mediocre or just plain bad' are rated quite highly in this website.
Right, because scores on mal are such a good indication of show's quality... Popular is not the same as good.

Yeah, overall this is really interesting but the anime can go to shit pretty quickly depending how it goes.

Antanaru said:
Mezter said:
'Series Composition: Okada Mari' is enough for me to start this anime. (Other notable anime done by her: AnoHana, Nagi no Asukara, Sakurasou no Pet na Kanojo, True Tears, Toradora, Hanasaku Iroha, ...)
I haven't seen NnA and TT but rest of the series you mentioned is either mediocre or just plain bad. Looks like it's better to have very low expectations for this series.

Well interestingly the rest of those anime which are 'mediocre or just plain bad' are rated quite highly in this website. If you dislike those kind of genres you should better avoid her works like this anime.