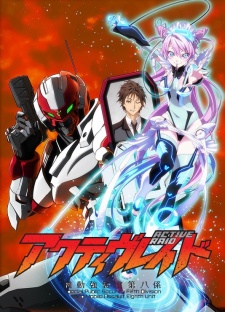 The official Twitter account for Production IMS' upcoming TV anime Active Raid: Kidou Kyoushuushitsu Dai Hachi Gakari has announced that the series will be broadcast in split cours. The first half will premiere on January 7 via Tokyo MX, while the second half will air in Summer 2016. It was also announced that Tomoyo Kurosawa will play the role of Liko.

The series will receive a pre-screening event on December 25 at Human Trust Cinema, which is located in Shibuya. Cast members Nobunaga Shimazaki (Takeru Kuroki) and Taichi Mirata (Tomoki Hachijou) will attend the event alongside staff members Gorou Taniguchi (Chief Director) and Naruhisa Arakawa (Script). Tickets for the event will go on sale on December 19 and will be limited to two tickets per person.

I don't know, seems kinda promising but not sure really.

gophercg said:
IMS does ok from 4 shows I've seen, but is this Code Geass/patlabor with Ore Twintails quality?

It probably won't be exactly like any of those shows, to be honest, and I believe IMS has done better quality work with series like Dandelion recently.

You say IMS, I say nope

Hope it will worth watching it to the end :)

IMS does ok from 4 shows I've seen, but is this Code Geass/patlabor with Ore Twintails quality?

Damn, Shinmai Maou all over again.
I really hate when split cours becoming a trend.
I just wish they don't fuck it up and and make it good.

Most mecha anime has tons more depth than harem anime.

yeah, its just that most of the time people who hate mecha just doesnt like the mecha battles and find them boring af. (i think)

moodie said:
FedeBankai said:
Why I hate mechas that much!? ;_;
fuck mecha

Most mecha anime has tons more depth than harem anime.

I dropped inari after few episodes because it was boring and had noting interesting. No action, no perverted scenes, no funny comedy scenes and has boring & uninteresting story. It does not have anything that make me want to watch it unlike the other shows.

Paulo27 said:
thepath said:
All the anime that IMS made (except Inari, Konkon) were good.
Except Inari, Konkon was the only good show they made, funny how that works, uh?
i feel the same, lOl. maybe i can including joukamachi no dendelion.

Xenocrisi said:
What's with this trending? I hate split cours.

Yeah it's related to production capabilities. A 2 cour is far more costly but then again it's not like anything is changing (just different broadcasting dates).

All the anime that IMS made (except Inari, Konkon) were good.

Uuuuh, of course the IMS anime gets 2 cours.
Fucking hell.

Well, guess I'm doubling down here. Hope this is Production IMS' critical breakout and not your typical IMS show. Will probably watch them anyhow.

What's with this trending? I hate split cours.

Well, at least its better than only being a 1-cour and nothing else.