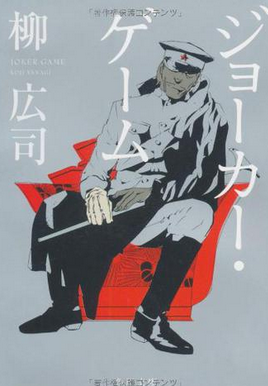 An anime adaptation of spy novel Joker Game written by Koji Yanagi has been green-lit, according to the September issue of Kadokawa's Monthly Newtype magazine. The TV anime adaptation will be directed by Kazuya Nomura and produced by Production I.G. Original character designs will be made by Shirow Miwa. The novel has been previously adapted into a live-action film that premiered on January 31, 2015.

Koji Yanagi is known for having written other fictional novels in his mid-twenties with his debut work, Ogon no hai (The Golden Ash) in 2001. His novel Joker Game, published in 2008, earned him a Mystery Writers of Japan award in 2009. The novel also spawned sequels including Double Joker and Paradise Lost.

Synopsis
Taking place in the year 1937 on the eve of World War II, the story involves a mysterious spy training organization known as the "D Agency." The organization is established by Lieutenant Colonel Yuki from the Imperial Japanese Army. His ideals lead him to recruit people beyond military academy graduates and personnel, while training them to become skilled agents in arts of manipulation. These agents would become a specialized team to conduct operations. One such antihero agent, under the name Jiro Kato, goes on a harrowing mission to uncover secret documents titled "Black Notes," while battling forces from within and without his own ranks.

This looks really good, the artwork looks great too. I wonder how many episodes it will have.

phoenixalia said:
Those are some delicious character designs on that website. My interest in this has increased.
Mine too all I'm seeing are pretty agents. Beautiful art by Shirow Miwa.

Jodyqt said:
While the premise sounds interesting. I can't shake the feeling that this might be some kind of perversion of history in the interests of Japanese nationalism. At least it doesn't sound like something along the lines of Konpeki no Kantai or even Zipang.

I'll approach with a degree of skepticism.

i haven't read the light novels, but the premise of the live-action mostly takes place in a fictional "international city". as far as i am aware, other than the time & setting itself it avoids a lot of the actual history. (my copy's still in transit, though, so take that with a grain of salt lmao. also i have no idea how the novel/movie/anime plots are related.)

anyway i've been hyped af for the movie for months so i'm glad i can carry that hype right into anticipation for the anime! i would've watched it no matter what, but production i.g. is the icing on the cake ♫

Seems to be a lot different than the shows that we normally get. I'll definitely give this a watch when it comes out.

I'm fucking sold....I can't wait for this to come out

Those are some delicious character designs on that website. My interest in this has increased.

This seemed so interesting up until the point where it said Production I.G.

There's always some kind of inexplicable dealbreaker in their productions for me.

Harem_King said:
so if the novel doesn't have a girl on it ppl are fine

Don't worry, when a female character gets introduced everybody will naturally sh!t on it (unless she's a hoe or abused (gangsta) cause that builds character)

You had me at:

yhunata said:
Harem_King said:
so if the novel doesn't have a girl on it ppl are fine

but hey thats none of my business

I'd say that the difference is more that this isn't a Light Novel.
Ahahah quite often when Kadokawa adapt a novel published under kadokawa bunko label (novel label) it's because they're preparing themselves to publish it under kadokawa sneaker bunko which IS a light novel label. RDG and Another are two examples of that.
This would effectively put Joker game under the "LN" category at the same time as it is under the "novel" category, like lots of other series actually, since that kind of things isn't rare at all (just among my own collection, there 's several series/titles which have both been published under LN and novel labels).
But then again, peoples who have no idea about what's the difference between a "light novel" and a "novel" is have no chance of understanding that kind of things xD.
Jodyqt said:

There is a fundamental difference on the most part between Light-Novels and Novels and that is how they are published on the market. For all those defending LN's, just know that an apt equivalent for them would be fucking airport novels in magazine stands - along the lines of crappy Mills and Boon novels and those shitty westerns. Little care goes into their overall publication and the writing in them is for the most part (with rare exceptions, a handful of those are mentioned above) awful.
Look, another person who 'knows". kek.

Definitely checking it out if PV is good

Harem_King said:
so if the novel doesn't have a girl on it ppl are fine

but hey thats none of my business

I'd say that the difference is more that this isn't a Light Novel.

This could be REALLY good with the right art work and handling of the subtilities. Could use a Studio Ghibli style art work, or something like Billy Bat's art. Considering that the writer won some kind of prestigious award, this could almost definitely be the next SSY