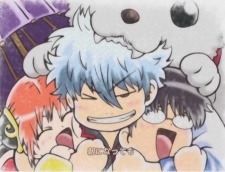 The problem that Burton has these days is that he's tackled on projects that are a bit... out of his range. There's the Alice and Willy Wonka remakes for instance. He does best with stuff that's already really dark and macabre to begin with. If he were to come up with his own anime, I'd be all over that shit. He'd have total creative freedom (or at least as much as the networks would allow for)

As for Soul Eater, I've yet to watch it but from what I understand, it's kind of like Shaman King (which I thoroughly enjoyed reading back in middle school). I'm definitely itching to give something like that a shot. You know... once I get through the 40+ other things on my list I plan to watch. The visuals are vaguely reminiscent of the eyecatches in Gurren Lagann, so awesome.

As for who I find the best Joker voice, well obviously Mark Hamill but that's mostly because he's got the most experience with the character. He's been voicing him for like what? 20+ years? Of course he'll hit the nail on the head every time. But, a *VERY* close second would have to be John DiMaggio. If Kevin Conroy and Mark Hamill ever retire, I'm really hoping that Bruce Greenwood and John DiMaggio take the helm from there.

defunctmaluser May 26, 2014 11:52 PM
I'm not too huge of a fan of Epcar's Joker. I mean, it's decent but he doesn't bring anything new to the table. I mean, John DiMaggio and Kevin Michael Richardson are quite the distance away from the likes of Mark Hamill (and to a lesser extent, Troy Baker), but they still managed to capture the spirit of our harlequin crime lord while adding their own, unique touch to it. At least Epcar's Joker is a step up from Young Justice's *shudders* It's like the bloke playing him was trying to do a fandub of Heath Ledger, except he was trying too hard.

As for Epcar vs. Perlman... it's just something I can't get on with. I love Epcar as a VA, but after seeing him do entire scenes with virtually no dialogue, kicking Yakuza ass, and hearing his conversations with Kusanagi in the end of Innocence, it was just jarring for me to hear the guy with the basset hound at home joke around with the tachikomas. It's one of those changes I can never quite get used to no matter how much time passes.

midnightblade May 22, 2014 7:02 PM
huh I hope you enjoy Watamote. I enjoyed it for the most part when it was airing about a year ago, that opening is kick ass. Tomoko can be pretty funny sometimes, I know at least a few moments I was breaking down laughing in that series, even though some of her issues are serious if you think about it.

defunctmaluser May 21, 2014 9:59 AM
Personally, I thought that Richard Epcar should've stayed in the films. I'd really love to hear Ron Perlman doing Batou's voice (preferably with the same voice he used for Slade in Teen Titans). Otherwise, Steve Blum would've been an adequate substitute. Whenever I heard Richard Epcar in Stand Alone Complex, I kept expecting the same guy from Innocence (which I really loved, by the way). But Batou's personality shift from a brusque and serious-minded commando to a light-hearted joker with a hair-trigger temper just didn't suit Epcar to me.

This isn't to say that I don't think Epcar can do comedic roles, I mean... look at Bobobo. But whenever I heard Batou's in SAC crack a joke, I imagined it was Bobobo telling the joke and not Batou himself. Get what I mean?

HellionYura Dec 29, 2013 8:34 AM
Hey hey! Can I be your friend? :D
It seems you're the only person besides me to find that the first episode from Gintama is not that bad. XD