'Akagami no Shirayuki-hime' Announced to Air in Split Cours 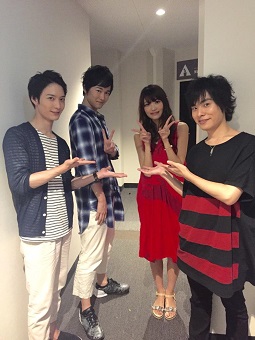 Upcoming fantasy romance series Akagami no Shirayuki-hime (Snow White with the Red Hair) has been announced to be broadcast in split cours, with the second half being broadcast in 2016. The first episode is scheduled to air at midnight in Japan on Tokyo MX and will be streamed simultaneously by FUNimation.

The announcement was made during the pre-screening event at TOHO Cinemas Shinjuku in Tokyo on July 4. Yuuichirou Umehara (Mitsuhide Rouen), Ryota Osaka (Zen Wistalia), Saori Hayami (Shirayuki), and Nobuhiko Okamoto (Obi) (pictured from left to right) attended the event, participating in a talk and game session.

A second PV for the anime was also uploaded to the official website on July 4.

The manga series currently has 14 volumes in print, the last of which was published on July 3. In celebration of the TV anime, the series is also featured on this month's issue of LaLa magazine.

Split cours is much better than 2 cours imo
More Shirayuki next year is fine too!

So happy this is getting another season.

...whew..splitted huh..ow right
...watching the PV and the beautiful drawings

this is a very delighting news :D

Might read the manga as the anime is delivering what I want :)

maku21 said:
good news to the fans then, i guess

The fact that this is going to go on for "longer" is both a blessing and a curse in its own right I suppose.

I'm so glad this is confirmed to be 2-cour, would have been a real shame if it wasn't. :>

Very pleased with this announcement.

rodac said:
Mod Note: Please don't post spoilers about this or any other show without tagging them. Major plot spoilers will be removed and could be considered trolling as posting them angers other users. Spoilers for this show and Yona removed. Note that extended discussions about the plot details of another show are both off-topic and spoilers.

thanks i hate spoilers with a passion. shit birds always just want to fly in an crap on you when you aren't looking.

Mod Note: Please don't post spoilers about this or any other show without tagging them. Major plot spoilers will be removed and could be considered trolling as posting them angers other users. Spoilers for this show and Yona removed. Note that extended discussions about the plot details of another show are both off-topic and spoilers.

sweet, nice to now how long the series is.

I love the manga and really can't wait for the anime. Though I think the anime's character designs are far inferior to the original designs. Of course a big reason for that is that the character designs are so beautiful in the manga, almost drawn to perfection in my opinion. Especially Shirayuki and Kiki. I would have been quite a bit more excited if they actually came close in the anime, but I guess a higher budget (or another studio) would have been needed.

Though I'm happy that the anime receives a 2cour adaption. Hopefully the BD/DVD sales will be good for another continuation.

SanjiCC said:
o.O lol seriously? well I never bothered with that cause i realised it's going reverse harem route while having a canon route which equals into NOTHING happens in the end, and that's why I like shirayuki so much, the developement throughout the manga is just brilliantly written
Not really reading the manga but the anime doesn't really go reverse harem, there's really only 1 love interest.

SanjiCC said:
Paulo27 said:
LoneWizard said:
I have a feeling that romance part wont be better than Akatsuki No Yona but still,2 cour is almost always better than 1 cour :/
The romance in Yona was shit tho, I hope this actually makes something, anything, happen in 2 cours.

Like hell, they confess to each other on chapter 12, so probably towards the end of cour 1 and after that there are ton of couple scenes, tho this has action too so it's really good.

It was like episode 7 or something but then they proceed to headbutt each other and the subject is never bought up again, and like I said, everytime Hak tries to do something she just runs away because she still likes her cousin deep down or is confused or whatever, it's no different from those LNs where the MCs "marry" and then nothing happens but lots of blushing and being scared of touching each other, at least in Yona they downplay this to the point where it only happens once every few episodes, it's a bone throw, really, but at the same time they also downplay the progress because we know there can't be romance before there's lots of blushing and being afraid of each other's body.

thats more reassuring but at the same time i just dont know if I want to watch this or not, i keep getting the feeling its going to be a show where nothing of value really happens and the romance will wind up being one of those typical shoujo romances where things are too perfect for the people involved and they get together within like 3 episodes


Doomdoctor said:
Those are some pretty impressive visuals
Honestly it looks kind of low budget to me, somthing feels really off about how characters are moving, like it looks too slow or just doesnt look like how a human should move.

Funny, I just binged watched yona the other day.

Would be nice if someone could approve the entry so I can ptw it :s