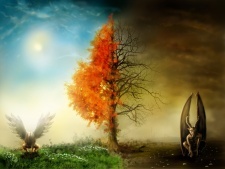 AIM: To become your father

tenshimoonbunny Jun 5, 12:59 AM
Thanks for saving me from watching that Hikaru no Go special. I'd have been disappointed, even if it is unrealistic to hope that they would have somehow resolved the unsatisfying ending... I'd have been happy with a really predictable and stupid alternate ending where Sai doesn't disappear until the end when Hikaru achieves the Divine Move! I just finished the 75 episode betrayal known as Hikaru no Go so I haven't even gotten over that yet. Glad I read your review!

Kurt_Irving Dec 31, 2015 6:39 AM
I think the last 2 episodes or the movie might be a better choice for you. A short, episodic anime is still better than some anime with endless fillers plus inconsistent fights.

SirAbblot Jul 30, 2015 8:22 PM
A red bird flying out of someone's eye, that's pure sin, but a princess walking around collecting half dragons with super powers is the best shit ever. Nice.

new1 Jul 10, 2015 11:20 AM
Hey bro, your review for kuroko no basket was spot on, watching it after Haikyuu lead me to compare it constantly :( and in comparison I didn't enjoy it as much as I would have if i hadn't watch haikyuu first.

As far as I know, the anime stopped once it was clear there wasn't going to be any more new material anytime soon. Frankly, it would have been better not to set up the Taiki storyline and ended with the end to the second Youko storyline, but I suppose they didn't realize it would happen the way it did. There has been a new novel since then that furthers the Taiki storyline (Taiki comes back to the twelve kingdoms yay), although unfortunately it doesn't finish it. Even more unfortunate, Fuyumi Ono didn't write any more for the Twelve Kingdoms for a really long time after that.

Good news though. In the past two years, they've reprinted all of the novels again and there's even a 2015 calender for the series. Most importantly, they announced last December that she's writing a new novel for the series and that it's long. High probability right there that the next novel will finish up the Taiki storyline. Also, 12k is still getting a good amount of fanart too, for a series that's honestly been in limbo for years. The important thing here is that there is still an audience and demand for 12k related goods, so I'd say that if the novel finishes off that Taiki storyline, the idea of a new anime isn't ridiculous. It's definitely a lot more plausible than even 5 years ago. I'm certainly hoping for it!

teamdeathmatch Mar 22, 2015 8:33 PM
Nice review for shigatsu bro,
you stated exactly how i feel about the chinese cartoon

aikaflip Mar 14, 2015 11:06 PM
I read your recommendation wrong. I thought you were referring to Barakamon, which is spelled similarly to Bakuman. I've added Bakuman to my PTW. Thanks for the recommendation.

crestofhonesty Mar 10, 2015 9:57 AM
That's awesome to hear the manga follows the anime faithfully! Haha, I definitely can relate to that feeling of not wanting to finish something because you like it a lot, or for other reasons. This is my situation with Nodame Cantabile.

It's a great series! Still so incredibly underrated! I hope it can eventually get more of the attention it deserves. I would definitely recommend waiting, since last time I checked the scanlations and translations were quite far behind, unfortunately. Maybe they've caught up now? Who knows.

Yes! I've read a bit of One-Punch Man, I love it. I agree, its compelling and a fairly easy read, for such a simple premise. It also has fantastic artwork to boot!

Hope to see your next review . Sayonara ~