by trebmeg
Jul 1, 2015 3:39 AM | 17 Comments
Shoujo magazine Ribon's recent issue has announced that both Kodomo no Omocha and Tokimeki Tonight will get new one-shots in celebration of the magazine's 60th anniversary. Intended to give thanks to the magazine's fans, the new one-shots will be released in Ribon's September issue, to be published on August 3.

Kodomo no Omocha, often shortened as Kodocha, is a shoujo manga by Miho Obana. It was serialized in Ribon magazine from 1994 to 1998, completing with ten volumes when it ended 17 years ago. Kodomo no Omocha won the 1998 Kodansha Manga Award in the shoujo category.

Synopsis
Sana Kurata, a child actress, faces many problems in her classroom, including a major one - her bullying classmate, Akito Hayama. Sana's outgoing and friendly nature leads her to work towards correcting all of the problems around her. Her 'meddling' irritates Hayama but at the same time captivates him, just as Hayama's gloomy nature irritates Sana and compels her to change him. As these two opposites attract each other, they face many hardships which bring them closer to a mutual understanding. (Source: ANN)

Miho Obana also wrote a crossover, titled Deep Clear, of Kodocha and her other work Honey Bitter. She also wrote a 2-chapter spin-off of the original manga, titled Mizu no Yakata, a story about a boy and the ghost of his brother's girlfriend who haunts them.

Kodomo no Omocha initially received a 30-minute OVA adaptation in December 1995 which covered the first volume of the manga. It was then followed by a 102-episode TV anime which ran from April 1996 to March 1998. 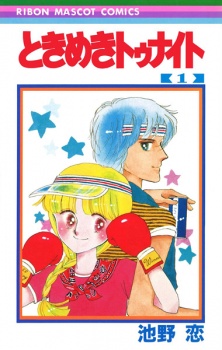 Synopsis
This is a long, epic manga that spans three generations of the Etou family. The first part is about Ranze, a relatively normal high school girl, except for the fact that her father is a vampire, her mother is a werewolf, and that she has magical powers of her own. Her family was banished from the Magic World to live among the humans, and they now guard the gate between the two realms. The story really begin when Ranze falls for a human boy, which her parents strictly forbid. Later story arcs focus on Ranze's brother and on Ranze's daughter. (Source: ANN)

Two spin-off series, titled Tokimeki Midnight and Tokimeki Tonight: Makabe Shun no Jijou, were launched by Ikeno in 2002 and 2013 respectively. Tokimeki Midnight is an alternate retelling of the manga where the roles are reversed. It ended in 2009 with 9 volumes.

A TV anime series based on Tokimeki Tonight ran from October 1982 to September 1983. It completed at 34 episodes with an original anime ending, since it would be another 11 years before the manga was completed.

I loved this series..anyone tell me where I can read this?

I've always really wanted to see the anime, but it's length, 102 episodes, still deters me.

I'm so happy to hear this!!! Kodacha is one of my childhood series. Need to reread the manga soon!

Still have to read Kodocha it looks really good.

Wow! Kodocha is still popular??? Man this was my jam back when I was a kid~

More Kodocha!!! No words for how happy this makes me!

OMO I am soon happy! I wouldn't have guessed that this would happen! Can't wait! (❁´◡`❁)✲

omg more Kodocha :D I loved that manga so much. I wonder what the one-shot will be about. I'd like to see more of them as teenagers.

Oh wow, I remember how funny this manga was. Surprised I never bothered adding it to my manga list lol.

Vindstot said:
Haven't read either manga but both seem to be decent series, so good news! Probably will check them out someday.

bd would be much better yeah?

Haven't read either manga but both seem to be decent series, so good news! Probably will check them out someday.

Seems very nice! I will try the new OVA and might watch the 102 episodes in a far future...

Awesome! Kodocha is my childhood and I've re-read the manga several times. Looking forward to reading the one-shot when it comes out.