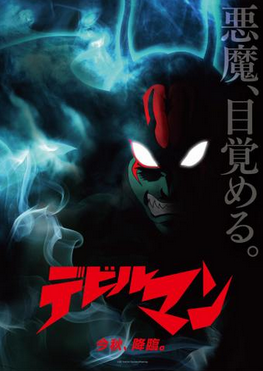 A new Devilman anime, based on the manga of the same name written by Go Nagai, has been announced by Dynamic Planning. It will be produced by Actas (Girls und Panzer) and premiere at an event screening in Fall this year.

A key visual (shown on the right) for the anime will be displayed at seven Japanese theaters from April 18.

Devilman was first published in 1972 in Weekly Shounen Magazine. Since its debut, more than 10 million volumes have been printed. A TV anime adaptation aired between 1972 and 1973.

Synopsis
During the Ice Age, demons, humanity's natural predator, were imprisoned in ice. Previously in hibernation, the demons are escaping in increasing numbers. Ryo Asuka's father was killed by demons after his archaeological explorations took him too close to the truth. After reading his father's notes, Ryo calls on the help of his best friend, Akira Fudo, to fight the demons. But only a demon can stand a chance against another, so Akira must let himself be possessed, but maintain control over the demon inside him. Akira, now as Devilman, must face the heightening onslaught of demon attacks to save humanity. (Source: ANN)

Nothing is too old for anime. If this ever airs in my area I will try to give it a shot but the manga might be up in the air though.

Great! I was thinking of reading the manga, but I might watch this adaptation instead.

This does seem pretty cool... But does anything really matter until One Punch Man comes out?

Cool that they are adapting a older manga (loving this recent treand) but I already read the original devilman, and honestly it was REALLY shitty with the good parts of it ultimately going to waste. Maybe if its a brand new story or reinterpretation of it or something ill get on board but even then i cant say im that inclined to give it a go

I didn't even like the manga that much, yet i'm somehow excited for this.

I like how there adapting more old mangas. This should be interesting to watch.

I recently tried the OVAs... just awful... something about bullies and bunnies...

Yeah for sure. Devilman is sooo bloody good. (Lol) I'm happy about this! ^^ MORE DEVILMAN!

Oh. I might check out the older series' and OVAs.

I am pleased by this news, really liked Devilman Lady, hope this is up to par

It sounded really freaking awesome---til it got all shounen on the synopsis. I believe I can already predict what will happen in it without even watching it.

I'll still watch, because the first few sentences hooked me.

Less reasons for hype if it's going to be a movie. Oh well, still gonna watch it.


Has any of his works been made recently? Like the past couple years? Censorship for gore on any TV anime series is almost for certain these days.

Considering this is a movie adaptation i doubt there's a point in censoring gore in a movie, which people are paying to watch.

Wasn't labeled as a movie when I posted. Or at least, wasn't in MAL when I attempted to look it up, and series type wasn't announced so I figured it was a TV series.

waaah, I remember watching the OVA's not long ago but wasn't expecting this at all, such and old manga xD I'll watch :3

That is pretty interesting!

Has any of his works been made recently? Like the past couple years? Censorship for gore on any TV anime series is almost for certain these days.

Considering this is a movie adaptation i doubt there's a point in censoring gore in a movie, which people are paying to watch.

I hope we can get a new Getter soon as well.
The day that happens I will flip shit.

It's cool that you posted this, that in itself is enough.