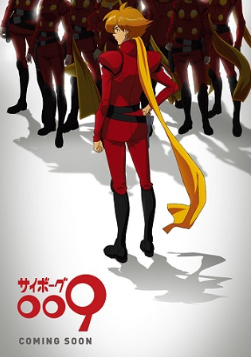 To celebrate the 50th anniversary of the franchise, a new anime project related to manga Cyborg 009 has been announced on its official website. Director Jun Kawagoe will be involved in this new project. He previously directed a TV anime titled Cyborg 009: The Cyborg Soldier in 2001.

The Cyborg 009 franchise is based on the manga created by Shoutarou Ishinomori which was serialized in 1964. The manga has been previously adapted into movies, a CGI short, and a television series. The format of the new anime project is unknown.

According to the official website, the tagline for the anime project is:

2015. The battles of the 00-numbered cyborgs will continue.

How I can't wait, one of my favorite classics!

Seeing as how the director is the same one from the 2001 series I believe this new iteration will be good. I enjoyed the 2001 version a lot; I might marathon it to reacquaint myself with the franchise~

I'm pumped for this. I still can't find the final 3 episodes anywhere so I'm glad that they're doing this.

Hearing that it will be the same person that was involved in the 2001 anime version, I am very interested.

It’d be really neat if they could treat this the same way they did with Casshern and made it an alternative version instead of a remake or continuation. Make it dark and gritty just like Casshern Sins. I don’t know, I think that’d be cool way to approach this.

If this is indeed going to be either a remake or just a continuation of the old series, then I just hope they put some decent amount of budget and effort into it. The 00-numbered cyborgs deserve it.

Anyway, I’m looking forward this. Just hope for the better.

haven't watched the original series... but I'll check this out!

Yay, quite a surprise. I've forgotten this series until now

Hopefully it will do the franchise more justice than that 2012 movie remake.

I remember seeing this when I was a kid and I used to really love it.

If this is a remake or something similar I'll definitely watch it.


Vindstot said:
I've been meaning to get into this franchise, but never really got the time. This new project will probably be my chance to do so.
This.

I'm not familiar with Cyborg 009 series (but I'm an huge Kamen Rider fan).
I only watched the movie from 2012 and I didn't liked it, maybe because everything was happening so fast and it was getting confuse.
I have high hopes that this TV series will change my point of view. :D

Sounds promising, so I'm giving it a shot.

I think that I was like 10 or 11 years old when this aired on Toonami (I love my childhood :''D)....Seeing vintage shows like these come back to life makes me smile

Looking forward to this. I will watch this one for sure.

Wohoo! This is great!

Used to love Cyborg 009 as a kid. I'm gonna enjoy the heck out of this one.