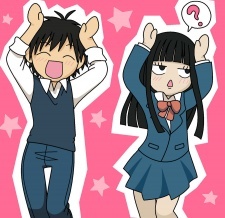 Pavo_Anime Jan 9, 1:30 PM
I just came across your profile and I love your rules of anime (about dropping and not dropping them), I couldn't agree more as I never plan to drop anything lol.

Also I love that you are a big fan of Clannad, who would you say is best girl?

Pitzer Aug 1, 2017 5:22 PM
yeah there was a cinema rip i think?
But that shit is so low quality it's almost unwatchable. Thankfully that isn't the case now that we have Blu-Ray quality goodness.

Pitzer Aug 1, 2017 6:09 AM
I hope you are aware that your name's release took until its BD Release and the BRs had to first be shipped to someone who can rip and upload the whole thing and then people had to either go with the official subs or translate a WHOLE MOVIE.
Waiting a year for the BD is basically the norm at this point so the wait was fairly normal.

Relunx Jun 11, 2017 4:46 AM
Hey, yeah, long time no see/chat. Not much changed, still alive. And you? Also sent a private message including some details.

Nah, One Piece may follow a linear storyline but we're constantly getting new info on the many mysteries in the series. Also there's always new and interesting characters introduced to keep each arc feeling fresh. Also stuff does happen so the arcs definitely aren't all the same. Some shows follow this formula (New arc - Villain shows up - bad stuff happens - Main character powers up - villain gets defeated) but not One Piece. Luffy is far from being the strongest and he's lost fights on different occasions. As someone who's been following OP for 10 years now, I'll say I can rarely predict what's going to happen next.

Doflamingo45 Apr 18, 2017 12:16 AM
For me I won't stick around on a 12 episode series if after 3 episodes it doesn't entertain me. It's only 12 episodes after all. I'm also the complete opposite (which is a good thing, life would be boring if everyone was the same), I find longer series are more for me. The longer the better. Longer series have a lot more room for a bigger story, and better character introduction/development. It's also really long so I know I can invest myself into it. 12 episodes are not completely worth it I find as after those short 12 it's done for good. Though there are few 12 episode series I love (Death Parade being one, and also in my top 10).

"I get what ur saying and I didnt say everyone had to follow" It's 100% your opinion and I respect that. I just felt like giving my two cents. I'm kind of random and will comment on something if I feel like it regardless of what that may be.

One Piece being boring is one thing and also how you feel. But for someone to straight up call an 700+ episode series bad after 5 episodes is ridiculous. That's like reading 3 pages from the first Harry Potter book and then calling the series as a whole bad. Besides One Piece doesn't get good for most people until episode 30 - 40. It has quite the slow startup. Also you'd think something with that many episodes would be boring, but surprisingly it gets more hype arc by arc. There's a reason it's the #1 highest selling manga in Japan. Though as you said it's not for everyone and I completely understand that. One of the longer comments I've typed up. So by all means hand me as many lucky straws as you want, doesn't bother me in the least. :\

"Never stop watching an anime at 1-3 episodes and then put it on ur drop list. How do u know if it is a good anime if u drop it without really seeing it."

If it's only 12 episode then usually 3 is enough to tell you what the series is like and if it's for you going forward. Though longer series I agree, you need to put a good 10 - 20 into it. One guy told me One Piece was bad after watching 5 episodes (it currently has 784 episodes) LOL.

Banzybanz Apr 10, 2017 8:41 PM
I haven't watched all the movies I have. Yet to watch Princess Mononoke, My Neighbour Totoro, Only Yesterday, Ocean Waves, Nausicaä of the Valley of the Wind and many others. What movies other than Studio Ghibli's do you like? I have watched all of Makoto Shinkai's movies and they are also some of my favourites.

Banzybanz Apr 6, 2017 6:49 AM
I have all of them, but for some reason I haven't watched them all. My favourite is Castle in the Sky.
All Comments