Hide AdsLoginSign Up
MyAnimeList.net
Can you predict the anime of the season? Register your team before October 2.
Anime & Manga News
Top
>
News
>
Voice Actor Kouichi Yamadera A... 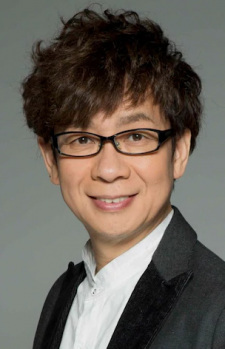 Voice actor Kouichi Yamadera announced his marriage to singer and radio personality Robin Shouko Okada on his official Twitter on Monday. The two met on the set of Bay FM's radio program The BAY☆LINE.

"After graduating from the radio program, I realized the importance of her existence and we started dating," he said. "Considering my age, I can only thank her for her decision to get married." He asks that his fans watch over the two warmly as they start their new life together.

This is Yamadera's third marriage. He was previously married to voice actresses Mika Kanai (1993-2006) and Rie Tanaka (2012-2018). His notable roles as a voice actor include Spike Spiegel in Cowboy Bebop, Ryouji Kaji in Neon Genesis Evangelion, and Kouichi Zenigata in the Lupin III franchise since Lupin III vs. Detective Conan: The Movie. He is currently affiliated with Across Entertainment.

Okada began her career in entertainment as an idol in the girl group Ciao Bella Cinquetti (formerly The Possible) in 2006, and remained with the group until it disbanded in 2018. She became a regular on the radio program 60 TRY Club in 2014 and, since the dissolution of the girl group, has also become a regular on The BAY☆LINE. She is currently represented by Up-Front Create.

They're both adults i don't see the issue with it. But then again twitter mentalitiy is not healthy at all.

I really have nothing much to say despite me having TOO many things to say. But well, I think in the next 6 years, there's gonna be 4th marriage and the wife will be 22 yo... I think that's a pretty good assumption at this point.

I guess I'm late to this, but I'd seen this getting mentioned in other forums.
I would NOT congratulate this A**hole. He was cheating on Tanaka Rie with this girl. Apparently this dude and the new chick were hinting stuff in their twitter. Disgraceful.

I wish them a happy relationship!

Congrats to both of them!

Wow I must say he is impressive.... never took him as the "ladies man"

Hopefully when I turned 45 and become a president of an IT company I can also marry a former idol in her late 20's.

Congratulations Yamadera-san hope this one lasts for good.

We will see you soon , I don't think this is the final one

I swear. People are unnecessarily toxic when it comes to the age gap between people. The woman is more than old enough to make the decision to marry him. I could see if she just graduated high school 🙄

Why would you have to calculate their age gap? Let them be. Their choice, their life.

Congrats to the both of them.

Nah, just kidding. Don't remember the last time I saw an older famous man (even in my country) marrying someone who's the same age or older. The woman is always at least 20-30 years younger. No wonder, to be honest. I wish them luck.

See how the age difference between the previous 2 wives are decreasing by 1?
The next wife after Okada will need to be 13 years younger than her so the 4th wife's birth year will be 2006.

That's a huge age gap, but to say that 28 is considered a kid these days is bonkers. If you're not equipped to live as an adult at 28, that's your problem.

Yamadera is my favorite VA, but I'm not a fan of such huge age gaps, so my reaction is rather meh at this news. But they're both adults, they can do whatever the hell they want. Good luck to them.

I'm from Canada, and 28 is still considered a kid here.

Most parents coddle their children in my country these days, and because of that, most people in their 20s can't do very much for themselves. I've encountered various 20-somethings who cannot even boil water.
That's the parents' fault, but the law says 28 is adult. Heck, most places say 18 is adult, and 28 is 10 beyond that.

Do we need Okada to show that she can boil water to prove that she's an adult here?

I'm sorry, but that's just sick. I guess she wants his money or something.
you're overreacting and hating for no reason lmao, who cares how old they are they're both adults. I hate that people are always quick 2 assume that the woman wants money as if she isn't already rich.

Being both adults doesn't matter here. The generation gap is so huge, he might as well have married his granddaughter. That's just not normal. 10 year age gaps are gross enough, but this is a 32 year gap. He's getting ready for an old age pension, and she's still a kid by today's standards.
If the ones getting married themselves aren't grossed out by it why should you/we be. It's not like we are forcing you to marry someone 32yr younger.

And no, in what country/culture is a 28yr old still considered a kid today.

what happened the first 3 times kek

Nah, just kidding. Don't remember the last time I saw an older famous man (even in my country) marrying someone who's the same age or older. The woman is always at least 20-30 years younger. No wonder, to be honest. I wish them luck.