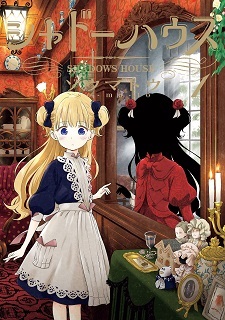 Production company Aniplex announced a television anime adaptation of Soumatou's Shadows House manga on Friday. The sixth volume, which shipped the same day, also contained the announcement on its wraparound band. A teaser visual for the anime will be revealed in the 48th issue of Weekly Young Jump on October 29.

Synopsis
Faceless shadow nobles living in a vast mansion, attended by living dolls who spend much of their time cleaning up the soot endlessly emitted by their mysterious masters.

Follow the story of Emilyko, a young and cheerful living doll, as she learns her duties serving as the attendant for Kate Shadow-sama. (Source: MU)

The fact that CloverWorks is the studio for this is really cool since it is similar to a anime that they did recently.

CloverWorks is animating the series.

does anyone know what studio is doing it?

Oh this sounds neat. I’ll probably give it a watch

looks weird and interesting, kinda like munou no nana fans said about their manga, it's not what it seems

can always do with more gothic lolitas take my neet bux

Always wanted to read that, guess I’ll wait for the anime

jc9622 said:
Aniplex huh? How much do y'all wanna bet this is going to be animated by A-1 Pictures or Cloverworks?

Could be shaft,bones, wit, ufotable,IG, MAPPA but you're right, the most probably is A-1 and Cloverworks

ChartTopper60 said:
SOUMATOU ANIME OOOOOOH MY FUCKING GOOOOOOODDDD
Kuro anime too? Please... ;-;
ISTG if Kuro, my favorite manga for 5+ years gets an anime... bruh Soumatou is underrated.
Oh worm, Kuro is my favorite manga too! If this is similar to Kuro I'll definitely give it a read and, eventually, a watch! I'd love for a Kuro anime too, tbh. Maybe if Shadows House does well!

Wow, well the feedback is positive, so I might as well at least had it to my list~!^^>

SOUMATOU ANIME OOOOOOH MY FUCKING GOOOOOOODDDD
Kuro anime too? Please... ;-;
ISTG if Kuro, my favorite manga for 5+ years gets an anime... bruh Soumatou is underrated.

Never heard of this manga, but the cover alone makes me very interested in this adaptation.

Wow I did'n expect at all!

Aniplex huh? How much do y'all wanna bet this is going to be animated by A-1 Pictures or Cloverworks?

Now just wait for the Kuro adaptation. Havent heard of this manga yet, bzt has the typical Somato vibe.