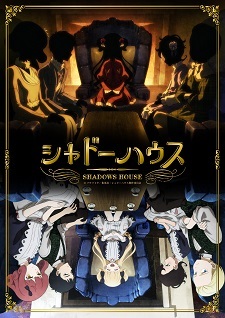 A second anime season for Soumatou's Shadows House manga was announced at the special livestream event for the anime on Saturday. The event also revealed an announcement promo.

Produced by CloverWorks, the television anime aired in 13 episodes in Spring 2021. Funimation streamed the anime with subtitles and English dub as it aired in Japan.

The slice of life supernatural manga began in Weekly Young Jump in September 2018. Tonari no Young Jump and the Yanjan! application simultaneously serializes a colored version. Shueisha published the eighth volume on June 18.

Synopsis
The Shadows, characterized by their pitch-black appearance and tendency to emit soot when agitated, are a family of nobles who reside in a colossal manor deep within the mountains far from other humans. When a Shadow child is nearly of-age, they are assigned a Living Doll who acts not only as their attendant but also as their second half—the faces they could have had if not for their complexion.

Emilico is a cheerful, newly created Doll who serves a rather soft-spoken master named Kate. Despite their difference in personalities, Emilico does what she can to carry out the needs of her master. As she learns more about her role and duty, Emilico begins to meet her fellow Dolls and their respective masters and comes to know more about the purpose of her existence.

"Do not fret over trivial matters," says one of the rules to which all Dolls must abide. But how could the ever-curious Emilico do so in the face of the deep secrets that the Shadows House holds? [Written by MAL Rewrite]

ITs an amazing stuff thanks for the information could you please suggest me best 알바퀸 i need your honest recommendations.

Oh no not a sequel and Studio CloverWorks. Look how they massacred my boy Promised Neverland with the second season. Don’t know if that was a good decision.

It's too bad they didn't just continue writing and directing the first season on the basis of an assumption that they would secure a second season some day, whether six months or six years from this past spring. Even with the willingness to end it on a much-hated and usually obnoxious cliffhanger if need be. I was initially against this as there are too many cliffhanger and cliffhanger-ish endings from anime series which don't receive a second (or third or any follow up) season for years after the fact or ever - Until I saw the last three episodes. Then I changed my mind.

Shadows House was on track to easily be my favorite of the spring season, potential favorite of the year even, and one of the better series out of the past five or so years that I've seen. I was going to rate it with an 8 score and considered it such a treasure to have such a wonderful modern anime; my first 8/10 in a few dozen series even.

But they undercut it to such an insanely obnoxiously strident degree with those last three episodes. Now a second season will have the task of salvaging the series and possibly even retconning or gracefully glossing over or incorporating the last three episodes in some way rather than just serving as the logical continuation of the series had they kept the original story intact or just opted for a more incomplete cliffhanger ending for the season one finale and the integrity of the natural flow and progression preserved.

Cute girls with Gothic charm in an isolated and ornate yet spooky manor with mystery and intrigue and domineering aristocrats conspiring. I'd love to enthusiastically proclaim this will be marvelous and is all my speed, but Yakusoku no Neverland season 2 and Wonder Egg Priority are, I believe, the two newest series I've dropped (and I don't drop that much)...

I don't get it man. Why change so much if they were going to do a second season anyways.

I have yet to finish the last episode but it's awesome that Shadows house is getting another season.

I was like "Fuck yeah!!!" at first but considering how CloverWorks handles sequels, I'll keep my expectation low. I've caught up to the manga now so the parts they're gonna fuck up will be more apparent to me. Still curious how they're gonna handle the plot points they changed in S1.

So after completely screwing over the story in the first season, now they're stuck trying to continue it? Someone call the fire brigade, the dumpster looks like it's about to start spewing smoke.

Ah, uh, yeah, nice to see the second season despite their best efforts, I guess?

this was such a surprise to me, i didn't expected a second season but i'm very glad. hopefully, hopefully... cloverworks would be able to fix the storyline considering how much stuff they removed and altered in the first season.

Omg ,two new season announced for my fav animes, in one day what more can you ask for

This is a wonderful anime and I'm glad to see it getting another season.

Let's hope they will correct the mess they made in the first season, the trailer looks like they finally will introduce the character they shamelessly removed so now I just wish they'll nail the transition from their painful anime-original ending back to the original manga story

Anyway, I don't have any hope or expectations for this second season because...well, Cloverworks.

Manga readers said it differed from the manga toward the end of the first season so it'll be interesting to see how this plays out. The show was decent though so I'm glad to see it'll continue.

I'm very happy that Shadows House got a 2nd season at all. This show was not really a Top 10 Spring 2021 show in terms of popularity, but it is one of the better ones for sure.

awesome, the first season was such a good time.

did not see this announcement coming due to the reasons people already specified and how it seemed like everybody was sleeping on this show, maybe it had really great ratings in japan or something? very cool regardless, though i do hope that cloverworks wil find a way to properly return to adapting the source more accurately (assuming that it retains its quality) and that they have a healthy schedule for this.

Man, this is just great news! I don't think this was particularly successful so my hopes were fairly non-existent for a sequel, but it is coming soon!

Hell yeah, I wonder how it's gonna turn out considering how the manga readers said the story was changed towards the ending of the first season. Really liked the show, looking forward to a sequel - hoping it'll turn out well.

How many shows from the spring season have continued? Can this be considered successful?