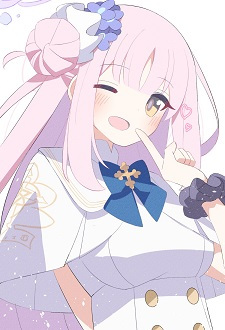 FourSeasonSage Jul 4, 10:23 AM
Yep, I keep a decent little pace of three shows an evening.

Green Green ain't worth it lmao trust me; only show I literally had to switch the audio to english in order to finish. I mostly watched that as a show of contention because back when I was on discord someone challenged me to watch that show for whatever reason. I dunno I just found the show grating, even in terms of ecchi comedy and the mc-kuns friends irritated me.

Oh Nice! So you know what I mean then; interesting you mentioned Fumika since her and Yukimi are the current SR event idols for the current event in Deresute

All the FGO stuff I know is mostly due to pixiv art, I've got very little context with that franchise as a whole since like I'm aware that it requires a good deal of lore knowledge and I've already invested my time into other things.

Sure. Well I approach that notion casually and chill, as I do most things; I'd say those sentiments are just a matter of contention really, and that in my experience, its pretty much stable in that there are some good shows, a few great ones, and a whole lot of average meh things, it just depends on whether you can enjoy and roll with the meh, or despise them. Older anime is different, like that's the key- its a different artistic discipline from a different era, so there's going to be things that resonate better like the heavy detail work or maybe the humor, but I don't think that makes it inherently better, I can find something to enjoy about most shows tbh. I'd say those are just points of contention where you can make an argument for either side; like, moe art and cute girls ain't gonna do it for everyone, so if they wanna be salty and say anime is tanking, than okay- doesn't change the fact we get some decent serious anime each season, though you'd think otherwise the way some carry on.

She was the only non-striker student that I didn't have before S.Hifumi was released

Kylinity Jul 3, 9:46 AM
I never knew about rerolling too, so I just thought Iori's good, but apparently she's absolutely broken, and is one of the must haves aside from Hibiki

Kylinity Jul 3, 8:32 AM
LMAO That's like the worst 3 star there is according to other people

FourSeasonSage Jul 2, 10:23 AM
This is prolly a direct result of my watch format that I developed overtime. I tend to plan out my show pairings ahead of time, like if I'm watching a mech, I want a cgdct sol to balance, or maybe some music or mahou shoujo etc that keeps it all fresh and enjoyable for me. Bleach and DBZ got a bit boring for me yeah, but it wasn't like Ergo Prox where I like zoned out lol

Actually same, that's how I decide what to watch most of the time, especially seasonal shows; for example Summertime Render I'ma watch because I like the cover, don't know what its about tho. I got a decent track record in how I cherry pick, but by now my tastes are quite broad and I'll give most shows an honest try, I tend to be 'silver lining' and as long as there's a hook for me to bite, I'll ride it out. Afaik, I completed Green Green lol I got a strong will, and that was a ROUGH goin.

Naw I wouldn't say so since its so subjective on whether shows work for ya; since its a hobby if you ain't enjoying something than why force yourself, right? Same could be said on me, like oh you just consume and consume so your opinions are compromised (lol I was told this before actually) and its like... dude I enjoy anime generally, its my hobby, so I watch all kinds. As long as your enjoying yourself that's what matters, like I could rec a manga to someone, and something I never noticed might irk them and they dislike it, we all notice/ enjoy specific things so it is what it is. epic answer lol I know

Yup, I got my hands full enough with Deresute; though I will enjoy pixiv fan art for a lot of different gacha games and the like- for example I know nothing bout Genshin Impact, never played it... but I do know Hu-Tao lol I don't play FGO... but I know Abigail and Shuten-Douji etc etc

FourSeasonSage Jun 30, 10:05 AM
Lol usually enjoy what I decide to watch, so its never been too much a no drop thing; shows gotta be pretty abysmal for me to abandon it. Gotta maintain a balance but its happened a handful of times

Too many cooks ruin the soup-- its the same with anything

Ah, pretty much- like I havent put time into leveling her and she dont got many fans from performing lives with her in my team. Deresute isnt so much management as its mainly rhythm gameplay, thus dont really demand too much in terms of reading japanese, unlike say Shiny Colors which is more production oriented.

Kylinity Jun 30, 8:39 AM
like seriously though lmao, most of the OP and meta students are on Gehenna

Iori, she's literally the strongest Piercing ingame
Ako, for the raids to be easier
Aru, she's an absolute nuts Explosive
Mutsuki, one of the best 2 stars ingame
Haruna, she's like the best Mystic ingame I think
S.Hina, amazing for Outdoors PVP

and so much more

Minseiza Jun 30, 5:38 AM
The VN adaptations I've watched or have been anticipating to are usually somewhere in the middle, but then again I haven't watched many. The synopsis of Muv-Luv looks a bit bland truth be told, but if the VN is worth it then I'll see. This also looks like the case with Nekopara, have you personally played it to judge?

That is pretty complicated, I'm wondering what the goal was with the producers for the anime. Seems like kind of a scrambled story too, so I can see why the anime wouldn't be recommended to anyone. Sounds good, I'll definitely be needing it.

True.. they are in something of a 'subgenre' of games, kind of. I can understand what you're saying though, something about the mix of an alluring playstyle with the goal of getting new characters continuously seems nice. I'm wondering what kind of gameplay Devil May Cry has, I've seen some Persona gameplay before. I'm not one for turn based combat, but it was pretty detailed.

Addiction probably scares me most when thinking of playing one, I guess these games should be reserved for those with good time management skills. I surely don't have them.

FourSeasonSage Jun 29, 9:22 AM
lol yeah, I guess it wouldn't really inspire the shitposting if spreading hype was the focus

Yep, I agree with everything you said completely- completely. That's always the problem with over exposure of any fandom, like case and point I used to enjoy the v-tuber scene a few years ago, but then it gets inundated with newbies and whatever and then its just meme's and ugh- I'm good on that. No thanks. lol yeah, that's pretty much how I felt when I the Nagatoro anime aired and you had folks watching 12 episodes of something they know they wont like just to shit on it later for what, I'm guessing anime tracker clout? lol imagine

in other news... new gacha in Deresute and its Akira and omg I can't... I don't produce her but wow that's awesome

and her awakened art?

ugh... no no, my patience is strong, must save gems

Kylinity Jun 29, 8:32 AM
I also don't have enough Gehenna mats. Why is it that Gehenna students are always the strongest and the most meta

FourSeasonSage Jun 28, 12:14 PM
Actually that's a fair-point that I don't tend to bring up because its not really my business, but that's something I always found funky bout forums; its like, the discussion point is 'most overrated' or some similar spin, where I'd rather it be like 'most underrated' right? Like glass half-full, silver lining, instead of tossin shade

I actually gave up after 100 rolls but I said to myself "Why not another try?" 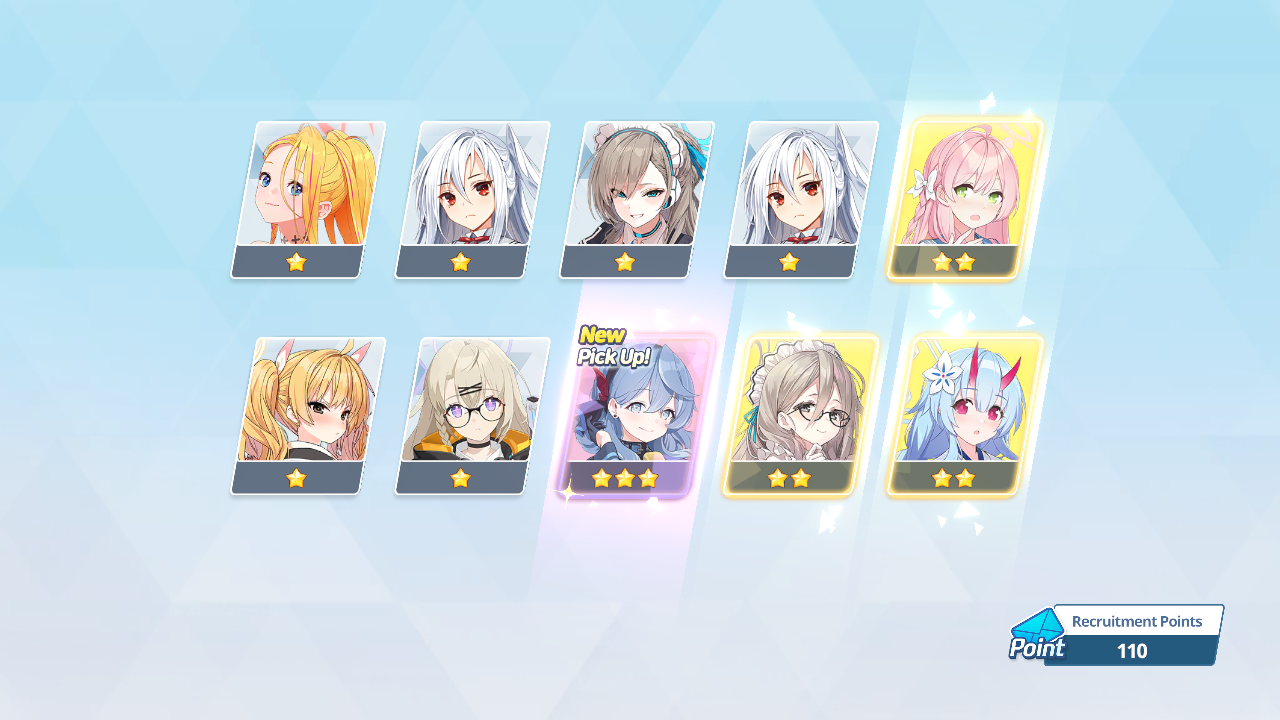 FUN FACT: 110 is the exact same amount of rolls when I got Swimsuit Iori 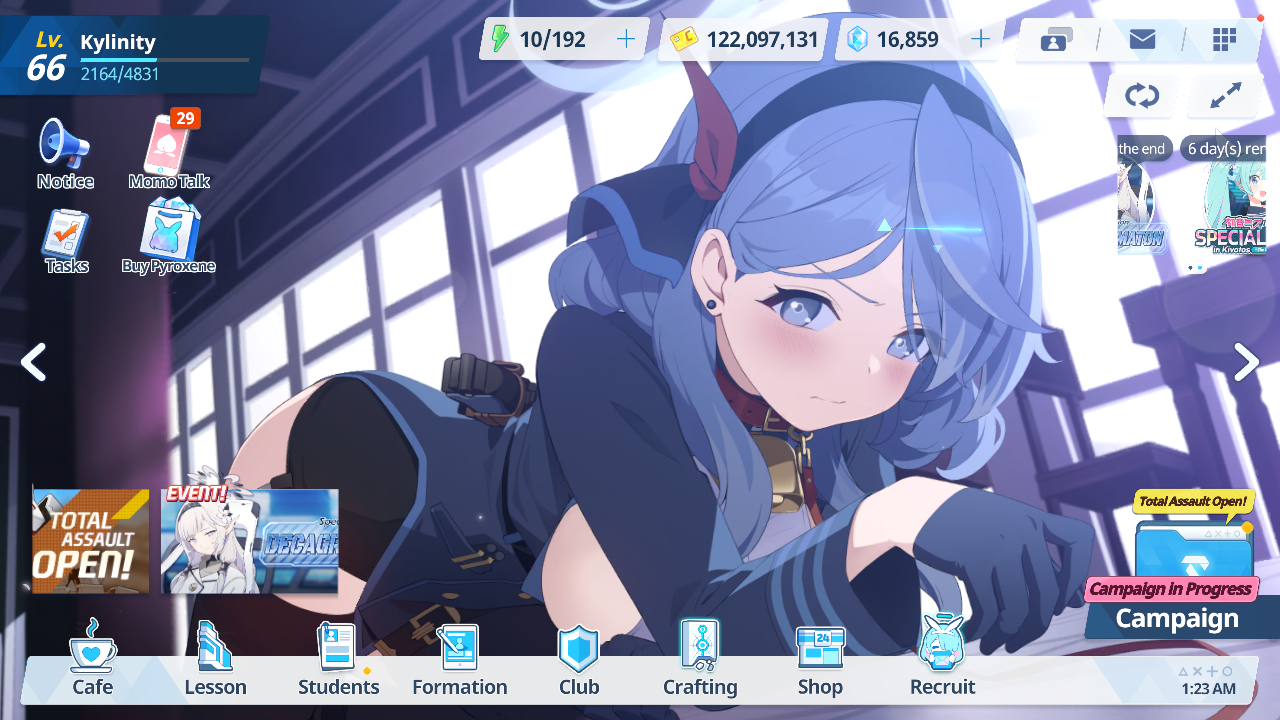 EXTRA: I somehow managed to get Haruna on 10 rolls finally. I won't have anymore problems with Mystic stuff. I actually freaked out immediately when I saw the Gehenna icon pop up and thought "PLEASE AKO" but atleast I got another good student 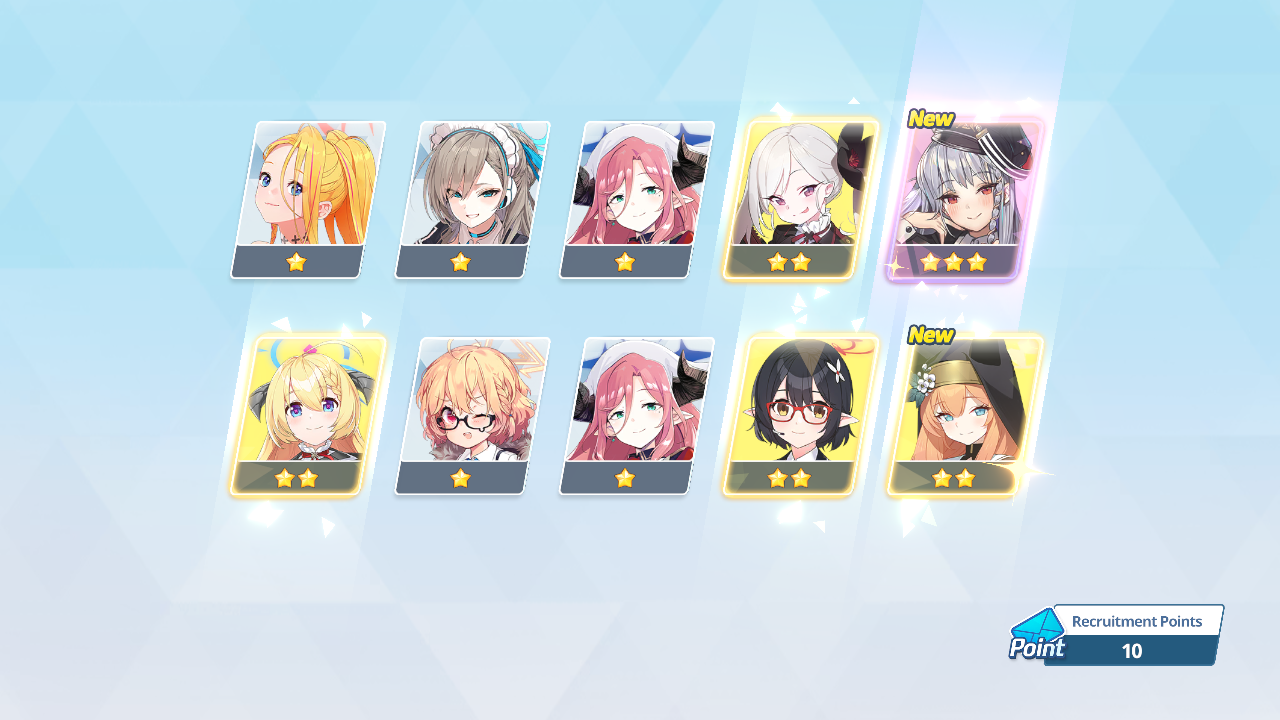 I'd rather maintain a small net presence, just my style. I did use the forums back in 2012 or so when I first joined MAL, but never really felt compelled to continue after a point; helps me avoid spoilers, I prefer convo's to be smaller scale, and since I don't watch seasonals as they air (I wait till the finish before watching) missing out on the discussions ain't really that much of an issue to me. Um, don't really have much of an opinion bout them since I don't use them, but basically I just like to be low-key nowadays

Kylinity Jun 26, 10:01 AM
Yup, I am ignoring the recommended. I feel like I already beat the game when I got T5 gear at level 59 lmao. Although all my students are at level 61, I may have almost killed my S.Tsurugi during Stage 14 lol

I'm an F2P player, and yeah, I was gonna plan to pull 100 times based on my calculations.
All Comments