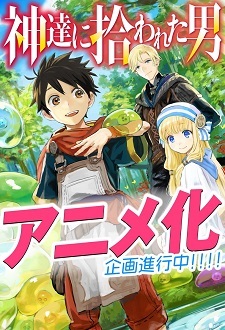 Synopsis
Ryouma Takebayashi dies in his sleep at the age of 39 after leading a life of misfortune. Taking pity on him, three deities offer him the chance to reincarnate in a world of magic where he has only one mission: to be himself and enjoy life. They bestow upon Ryouma powerful physical abilities as well as the affinity to master all elements, and promise to watch over him. His new life as a young child officially starts when he is teleported into a forest.

Three years go by. Having spent most of his time researching slimes, Ryouma has managed to evolve unique kinds of slimes, training an army of them while developing his magic abilities. Although the young boy is happy with his hermit existence and comfortable cave home, he somewhat misses the company of humans. But after healing an injured member of a passing group of travelers from a duke's household, Ryouma is persuaded to go with them and exit the forest accompanied by his menagerie of slimes. A whole new world awaits him, where his skills as a magic user and slime tamer continue to elicit surprise and admiration. [Written by MAL Rewrite]

Roy launched the adventure fantasy novel on the Shousetsuka ni Narou website in July 2015, garnering over 240 million views. Hobby Japan began publishing the series under its HJ Novels imprint with illustrations by Ririnra in September 2017. The eighth volume will go on sale on Saturday. The light novel has a cumulative 1 million copies of its volumes in print.

A manga adaptation drawn by Ranran has been serialized in Manga UP! web magazine since November 2017. Square Enix shipped the fourth volume in October 2019.

J-Novel Club and Square Enix licensed the light novel and manga in English under the title By the Grace of the Gods last November, respectively. The first light novel volume was published electronically on February 1. The first manga volume is scheduled for a November 2020 release.

Wow I hope it would be great! Like I didn't bat an eye for ascendance of a bookworm but oh my was it fun to watch.

I can't wait until the Isekai thing slows down a bit. Too many of these look the same.

I remember reading the WN for this, it was a kinda bland slice of life isekai where the protagonist is favored by the gods of said new world with some buisnes aspects.
But hey if you're into that kinda thing go for it.

G0ldStark said:
I know from experience that isekais with male protagonists are always bad
Not this one. This one is wholesome as wholesome can be.

most isekai protagonist is overworked middle aged man/woman. THINK ABOUT THAT.

Could do with less anime about DQ slimes

I haven´t read it or watch it, but it must be some sort of masterpiece.

"A man is reincarnated as a generic child in a fantasy world and has as a special trick the training of slime", at least in tensura the protagonist is transformed into a different species, but here is the same boy protagonist with generic design, dense personality whose special trick is the training of slimes, imagine that Rimuru remained the same man and his gimmick was a pet slime pet, while traveling saving only women, THAT IS Generic.

What is it with isekai anime and slimes? :3

Huh. Kind of wasn't expecting this to get an anime but cool. I will watch this and hey it gave me a reason to check out the novels now.

I'll try it if there's no romance.

NeoAnkara said:
I don't know if JNC license this knowing that it will got anime or that it is getting anime because JNC are licensing it.
It's getting an anime because the manga is selling well.

I don't know if JNC license this knowing that it will got anime or that it is getting anime because JNC are licensing it.

Piromysl said:
Looks like literally every other isekai ever made. Gonna watch tho.
Well this one is much more slice of life than others

This is a much better synopsis

One day, the life of middle-aged Japanese businessman Ryoma Takebayashi came to a rather sudden and disappointing end. Ryoma had never had a blessed life, but after his death, three great gods sought his cooperation and reincarnated him as a child in another world with swords and magic! Receiving a most cordial and divine welcome from the gods, Ryoma decides to live leisurely on his own in the forest for the time being. Working diligently at magic and hunting, Ryoma’s greatest passion comes to be researching his tamed slimes?! Training a variety of slimes (some newly discovered), the curtain rises on this easygoing life fantasy celebrating a second life with kind people in another world!

Pretty boring, but good for the slice of life fans I guess.

Looks like literally every other isekai ever made. Gonna watch tho.