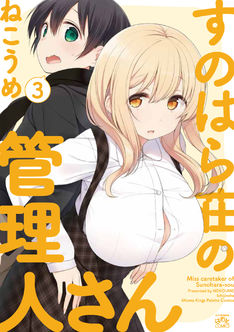 A promotional video for Sunoharasou no Kanrinin-san's third compiled volume, which will ship on November 22, has been released and announced that the 4-koma manga series will get a TV anime.

Synopsis
Aki Shiina is constantly being treated like a girl due to his feminine looks so he decides to move to Tokyo to attend middle school in an attempt to change himself.

However what awaits him in his new home, Sunohara-sou, is the kind-hearted caretaker, Ayaka Sunohara. Along with the three female members of Aki's new middle school's student council, Yuzu Yukimoto, Sumire Yamanashi & Yuri Kazami.

Sunoharasou no Kanrinin-san is a slice of life 4-koma manga drawn by Nekoume and has been serialized in Manga 4-koma Palette since May 2014. Two compiled volumes have been released so far, with second volume including a drama CD featuring the same cast members in the video.

So, shota, living with bit tittied wonderful onee-san/motherly type, delicious brownie big tittied gyaru, and two other girls who haven't been shown yet?

Yep, this is shamelessly going to be my guilty pleasure show when it airs.

Girly boys AND big fat titties? My shallow side says sign me the fuck up.

Swagernator said:
Another trap anime, no thanks.


That oppai is genuine! IT IS! I will guarantee it!

Is this Quetzalcoatl x Shouta spinoff of maid dragon the anime lol? I mean seriously, it reminds so much of their relationship!
I don't like fan service that much but I might watch this because this looks really cute and moe<3

Idc if the girls boobs are big, a shota-onee anime? Finally dreams really do come true..

I'd always put a yonkoma adaptation into my list.

Although while Judging from the cover, it will be full ecchi.
Ah... look at that girl clothes, the clothes button has blown away

Im ready...IN TO PTW YOU GO

Uh I think I'll check it out. I have no issues as long as it doesn't really make me facepalm. The only thing that ticked me off was the girl with the big boobs Lol, but aside from that. I'm checking it.

YES! great to see another big delicious pair of melons being animated :D

Sooo... feminine shota x big breasted lady? That's my fetish, and the cast is quite good too, might watch.

She's giving a good fight against that girl from Occultic;nine when it come to the plot.

Trap, harem, 4-koma. all they need is to make it an isekai, too.

Yeah those are most definitely too big