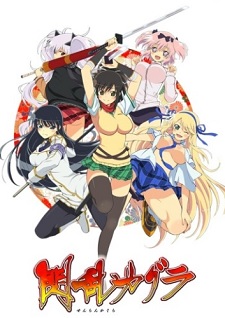 A second season of the TV anime series Senran Kagura was announced on Tuesday in a joint announcement event by game developer Marvelous and its Honey∞Parade Games production studio.

Senran Kagura is based on the series of hyper battle video games of the same name, the first of which was released in 2011 for the Nintendo 3DS. In May, Honey∞Parade Games revealed that it was working on three new game console titles, one of which was announced on Tuesday. Senran Kagura 7even: Shoujo-tachi no Shukufuku will be released for the PlayStation 4 console in 2018.

The first Senran Kagura anime aired for 12 episodes in 2013 and was released with English dub by North American distributor Funimation. An original episode was also released in 2015 with the PlayStation Vita and PlayStation 4 game Senran Kagura Estival Versus.

Holy crap, yes! The roundest boobs in anime will make another glorious appearance once gain. I'm actually hyped for this :>

I
Valaskjalf said:
You know what's funny ? Yesterday I was thinking that it would be cool if Hyperdimension Neptunia or Senran Kagura got sequels.
I wish there was a second season in Neptunia. I enjoyed the games, so they could make a new season.

This was totally unexpected. I mean, is this really popular in Japan?

Better go back and watch the first season now.

And buy the games that are available here.

And do as much research as possible.

Marvelous is the developer of Harvest Moon BTN. but since they gave up on the title, they wouldn't make hmtbn anime, would they?

Loved the games, not so much the anime, hope it turns out well, not very high standard though.

I loved this, one of the best ecchi anime out there. I didn't expect this at all.

Was expecting to hear something like this before year's end given the recent upswing in the video games' popularity.

All in all, an expected and smart announcement. Either way, more plot is more plot!

(this is for the 15 characters I need)

Here's hoping that Super Sonico will make a surprise appearance in S2 like how she got into that Senran Kagura beach game.

As a fan of the games... I approve. But they better make it better than the first cause let's be honest everything from the story to the ecchi was pretty bland. Since I'm a man of redemption, I hope this goes well, if not maybe I should just stick with the game for it's honor.

Valaskjalf said:
You know what's funny ? Yesterday I was thinking that it would be cool if Hyperdimension Neptunia or Senran Kagura got sequels.

I did not expect this sequel, but we NEED a Neptunia sequel!

Anime would be saved..

Wow I'm actually excited for this. Maybe we'll get to see Gessen Academy and the new Hebijo team.

Senran Kagura is just a good fanservicey time with likeable girls. Art can be a bit wonky for me and the writing can be a bit *nope* but in general the characters, gameplay, "plot" (even the actual writing plot), music, and entire franchise are pretty great for a fanservice franchise!

So excited for this!

I wonder who's going to produce the animation since Artland no longer exists.

You know what's funny ? Yesterday I was thinking that it would be cool if Hyperdimension Neptunia or Senran Kagura got sequels.

Personally, I am happy for this.

I watched first anime and OVA, and saw quite a lot of videos from games on YouTube.
Not to mention all those cards that come out every week.

It's one of those fanservice things where I just find characters likeable.