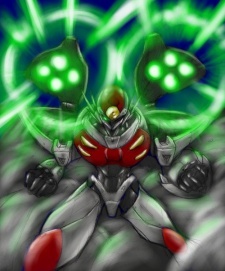 Oh yeah, when it comes to art I usually post them on my Twitter which is @BlazinHopeZ ^^U I draw my OC mainly but I've been trying to see if I can experiment different styles from series here and there. As for YouTube I do commentaries as of right now (which I go by BlazinHope), and with the release of Smash Ultimate I might release some video matches here and there from time to time while I work on scripts etc. Commentaries are a thing that I just do for fun in all honesty by the end. It's for criticisms and providing points but, I find that side quite amusing. Since I can be experimental with comedy and just my comedic tone >w<

Drawing is a talent I just inherent from the beginning which is... surprising for me honestly ^^ and I like experimenting with my tablet which is something that I usually do on my twitter.

At the moment I ain't watching much aside from trying to catch to Tensura. I have been reading Bokutachi wo Benkyou ga Dekinai... which to me is a better version of Nisekoi. Not because there's like some plot driven point or anything... there ain't much of a plot to go through but as a rom/com it holds up because most of the cast aren't really annoying to me. Which prolongues the enjoyment more personally. I'm waiting for the anime adaptation although I have one thing against it and that's the way they used the shiny detail in the hair for the characters ^^U a little too saturated.

Wasshio Dec 5, 2018 4:24 PM
That's something I can get behind. Either people will like it and appreciate it, or people will hate it and will just criticize it. That's just the norm in general which I really understand here.

That's perfectly fine, honestly I can see why you might have an issue with that. To me that wouldn't be the issue on it's own as that's a way to distinct her writing style, but the downside of that is that it gets stale and if done incorrectly it can really hurt the product too. That's why for example Hisone to Maso-tan exist, because the drama isn't that prevalent and it focuses on the military aspect and chemistry between the agents and dragons... as much as I think that idea is really stupid, I'll admit that was something that didn't had the "Okada" style of writing aside from a mini-arc but that mini-arc was to develop one character.

Hey who knows, and if it doesn't turn out well then... I dunno. Maybe rifting? Because I tend to rift stuff sometimes. But I guess the visuals don't look that bad (I'm KIIIINDA biased with those type of styles, if you get my drift).

Oh yeah Lol! And nowadays my anime watches has been deteriorating because I've been focusing on other stuff. Youth is something that changes through (even then a lot of my focus got shifted to doing drawings and posting them on twitter/making videos on YouTube as of now). But... I'm surprised how I even managed to so. And I find it weird how the heck did I found some weird shit to (Nami being one of the most prevalent examples ;;... I still don't know WHY I still remember that out of all stuff I've watched from that genre).

Wasshio Dec 4, 2018 3:10 PM
I really don't know. Honestly I believe she has potential, but it's not to say that she's a fantastic writer. Heck one of the reasons as to why I really don't like M3 is because the way she implemented her writing on the characters and the rules of the system came off as extremely forced for the sole sake of sympathizing with the characters (I mean in the third episode they had a scene where someone who was part of the army getting killed off and the drama over there felt absolutely out of place, it's been 4 years since then). That wasn't really pleasing to me at all, as the series gives me no reason to do so just because the shock factor was for the sole sake of it.

I do understand the complaints here and there (even if I like her stuff), but my main issue with that statement was... well, my biggest gripe was the Glasslip claim. She was really never apart of the Glasslip production in any shape or form. I mean, one of the person who she's associated with is in the project as the director, but that's just entirely it's own staff. I wasn't trying to say "Oh Hurr Durr you can't hate Mari" I was just saying that this type of criticism was just... off-putting, to say the least.

As much as I do like Okada, I have to admit she has a long way to go for even after being around for years.

She's slowly becoming more influential in the industry by providing support and helping with script phasing etc, and that on it's own is a good thing for her, but we'll have to see from there.

And as much as I am starting to feel a bit... tired? Of some of the detractors, it's not like the complaints are unwarranted. My issue comes from the detractors' responses to the fans, which stem from telling people they like "shit writing" which... kinda ticks me off. I am fine with criticisms, but those are not the best out there when it comes to people liking someone's work... because well, standards. That's fine but idk I never was fond of that type of criticism.

Oh don't get me wrong I ain't like... extremely hopeful about it? I like the aesthetic (well considering it really reminds me the Yuru Yuri designs), but I do wanna give it a fair chance.

Wasshio Dec 3, 2018 6:49 PM
The way you kind of wrote the response to me came off as salty. But to be honest I really don't have anything against the detractors towards Okada... just that your response came off as that. I guess you were more pissed off which... ya know, low expectations are a thing I can understand. I was just merely calling you out on what you said which... isn't something she's known for mostly? I was trying to be civil that's all.

RebelPanda Jul 9, 2018 8:26 PM
We can only hope. Even if he didn't have full control over the screenplay, any director worth his salt would not let writing this bad go unchecked.

I'm pretty sure Evangelion was also written episode by episode after a certain point, so I wouldn't be surprised if this was another element Nishigori aped without taking into account that his capabilities are much less than Anno's.

RebelPanda Jul 8, 2018 8:52 PM
Thanks! I know right? It’s almost laughable how a show with such a high budget put no effort into it’s writing.

TakamakiJoker Jul 7, 2018 7:20 AM
Franxx fanboys must be desperate tbh.
Oh well me and most of my friends are going to roast the living shit of it.
All Comments