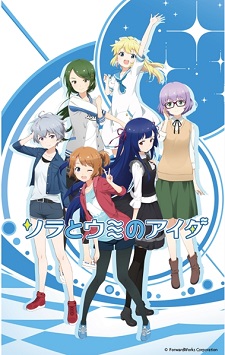 Mobile game company ForwardWorks has announced its second mobile game, Sora to Umi no Aida (abbriviate as SoraUmi), to be launched this October, as well as a TV anime, which will be animated by TMS Entertainment, and other adaptations in order to aim to be a multimedia project.

Synopsis
Set in Onomichi City, the project revolves around six girls who dream of becoming Space Fishermen. They aim to capture god-eating monsters that leave fish vulnerable, as well as enemies which they encounter.

A net radio for the project has been announced to start on September 3, in addition to a YouTube livestream on September 19. Other projects of the game include a manga series, a novel, and stage plays. The game will also be available in Taiwan, Hong Kong, and Macau.

Sora to Umi no Aida on MAL
New AnimePreview

for like a month i said i wouldn't watch it because of the "space fisherman" thing, but after seeing the preview i decided to watch at least 1 or 2 episodes lol
i'm sure it will be cute as hell, but other than that i don't have too many expectations, please surprise me =D

Admittedly, the premise sounds stupid, but I'm actually pretty curious about this. Thus, I'll watch it.

"there are 6 girls who aims to be Space Fishermen get monsters who capture gods who protect fishes and fishes themselves"
WHAT THE HELL?!LOL!!

This is not going to be anywhere near as good as Tsuritama, if the fact that it's a mobile adaptation isn't obvious enough.

Wasn't comparing how good the show would be, but the theme.

Chibi-Alice said:
Tsuritama but in space?

This is not going to be anywhere near as good as Tsuritama, if the fact that it's a mobile adaptation isn't obvious enough.

Well I'm up for it. Can't exactly be that bad I suppose depending how they'll execute the premise, yes its weird but... I dunno. I'm fine with it.

Tsuritama but in space?

Just another waifu anime with a weird premise...

Not looking forward to this at all and it seems pretty bad but I'd be lying if I said I wasn't immediately attracted to that tomboyish looking character. Good design

Is it just me that I think the two main characters look like Honoka & Umi from LoveLive?

Also how is "They also try to communicate with each other" part of the synopsis. Like guys, guys, there is actual talking in this anime :o